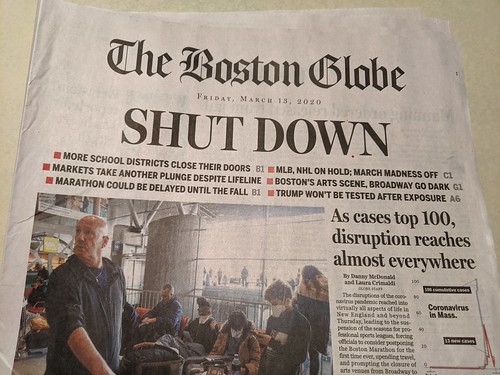 As is the tradition of this website, here is my Lowell-centric review of notable events of the past year.

Covid-19 Pandemic – No review of 2020 can begin with anything but the Covid-19 pandemic. At the start of the year, news reports from China told of a spreading virus. Soon, the virus was racking Italy and then other countries around the world. In early February, the first US case to be diagnosed appeared in Washington state. Throughout this phase, life here seemed completely normal. How did we not see this coming? But we did not. And then it was here. On the weekend of March 14-15, 2020, Governor Charlie Baker declared a state of emergency in Massachusetts. Schools, courts and many businesses suddenly closed, some temporarily, others for the duration. People began stocking up on critical supplies and things such as pasta and toilet paper became scarce. Later in spring, the infection rate in Massachusetts soared and state government mandated the wearing of masks when in public and imposed limits on how many people could gather and where. Through the summer, the virus persisted but the infection rate subsided in Massachusetts. While mask-wearing continued, other limits were relaxed and by the fall, many experienced “pandemic fatigue.” The return to normal impulse peaked at Thanksgiving. Many congregated and in the following week the virus surged to the highest rates experienced through the pandemic. In December, regulators approved vaccines by Pfizer and Moderna for general use. By the end of the year, it was a race between infection and inoculation. Although there was enough vaccine available in December to vaccinate 20 million people, by the end of the month only 2 million had received shots. The infection was winning.

Presidential Election – Donald Trump joined George H.W. Bush, Jimmy Carter, and Gerald Ford as recent presidents who failed to win a second term. Joe Biden won 306 electoral votes to Trump’s 232. Biden also won the popular vote, 81 million to 74 million. The election was not “called” until the Saturday after the election, and Trump and his supporters have still not acknowledged his defeat, persisting in his claim that Biden was the beneficiary of widespread electoral fraud. But as one of the many judges who dismissed Trump’s efforts to reverse the outcome wrote, “allegations of fraud are not evidence of fraud” and of that – evidence – there has been none, at least none that has been presented in nearly 80 lawsuits brought on Trump’s behalf. Biden only emerged as the Democratic nominee after a long primary process. Early on, Elizabeth Warren was a strong candidate, but by Super Tuesday (March 3, 2020), her candidacy had faded, and she finished third or fourth in most of that day’s primaries including in Massachusetts. She dropped out a few days later. Also in February, the U.S. Senate acquitted President Trump of charges of abuse of power and obstruction of Congress in his impeachment trial.

17th Middlesex State Rep Election – In the Democratic Primary, Vanna Howard defeated incumbent Dave Nangle. Howard received 2,724 votes to 1,986 for Nangle with Lisa Arnold receiving 1,495. Nangle had been elected to this seat in 1998, however, in February, he was indicted by the U.S. Attorney on multiple counts of wire fraud, bank fraud, and related charges. The case against Nangle is still pending in the U.S. District Court in Boston at the end of the year.

Charter Change in Lowell – In December, the city of Lowell published a map of the proposed City Council Districts to be used in the 2021 city election. The eight districts attempt to retain historic neighborhood boundaries while also designing two of the districts in a way that made a majority of their residents members of minority groups. The districts will be finalized in 2021 once the results of the 2020 census have been released.

Racism protests – In May, a police officer in Minneapolis, Minnesota, knelt on the neck of 46-year-old African-American George Floyd causing Floyd’s death. A widely viewed video of the incident led to protests across the country and a resurgence of the Black Lives Matter movement. Throughout the summer, millions of people participated in demonstrations against police violence. In Lowell, residents and the leaders of many nonprofit agencies urged the City Council to declare racism a public health crisis, however, the council defeated that motion by a 5 to 4 vote. Voting against the declaration were Rodney Elliott, Dan Rourke, Rita Mercier, Dave Conway, and Bill Samaras. Voting in favor of the resolution were Vesna Nuon, John Drinkwater, Sokhary Chau, and Mayor John Leahy. A month later, the Lowell School Committee reached the opposite result with Leahy, Jackie Doherty, Connie Martin, and Hilary Clark voting for the proposal. Voting against were Andy Descoteaux, Mike Dillon, and Robert Hoey.

New Construction – Some important building projects were completed or commenced despite the pandemic. In March, the new Lowell Justice Center at 370 Jackson Street was occupied and began operations albeit with limited public access due to pandemic restrictions. The three courthouses vacated by this move – Superior Court on Gorham Street, District Court on Hurd Street, and the privately-owned Juvenile Court on Appleton Street – remain vacant, although there was talk during the year of demolishing the District Court to create more parking. In November, the new 900-space Hamilton Canal District parking garage opened for business. Now, parking for Lowell National Historical Park will shift to this facility which should allow the National Park’s surface lot on Dutton Street to be developed. Also in the Hamilton Canal District, Winn Companies began construction of two new apartment buildings on Canal Street. Nearby, the remake of the Lord Overpass has made substantial progress with the old overpass entirely filled-in and the new intersection of Jackson Street and Dutton Street opened to traffic. However, much work remains for 2021. Finally, the new Market Basket on the Pawtucket Boulevard at Old Ferry Road opened late in the fall.

Lowell High School Addition – The city demolished the office building at 75 Arcand Drive which had been taken by eminent domain for the Lowell High renovation project. That will be the site of the new gym with a formal groundbreaking ceremony expected early in 2021. Detailed planning for the entire project has continued through the pandemic and everything seems on schedule.

Sports – Most years during this century this review has included an inventory of championships won by Boston professional sports teams. Not so in 2020. This was a year characterized by departures. The Red Sox traded superstar and former Lowell Spinner Mookie Betts to the Los Angeles Dodgers; Tom Brady left the Patriots as a free agent and signed with the Tampa Bay Buccaneers. That team is heading to the playoffs while the Patriots will head home with one of the rare losing seasons during the Bill Belichick era. And just a few days ago, Bruins captain Zdeno Chara, who began his professional career in Lowell with the Lock Monsters, signed with the Washington Capitals, a hockey team owned by Lowell-native Ted Leonsis. Finally, the Red Sox announced that they would end their 25-year long affiliation with the Lowell Spinners as part of Major League Baseball’s mandated contraction of minor league teams.

Books and Local Culture – The pandemic forced the shutdown or curtailment of much of the local cultural scene. An ambitious schedule of Lowell Walks in partnership with Lowell National Historical Park held only one walk – Women’s Activism in Lowell – on March 7, just before everything shut down. It was a fruitful year for local authors. In March, Atlantic Currents: Connecting Cork and Lowell, an anthology of writers and poets from Lowell, Massachusetts, and Cork, Ireland, was published by Loom Press. Other books published this year by Loom Press were The Power of Non-Violence: The Enduring Legacy of Richard Gregg by John Wooding; On Earth Beneath Sky: Poems and Sketches by Chath pierSath; Cummiskey Alley: New and Selected Poems by Tom Sexton; The Blue in the Eye of the Girl at La Jolla by Eric Linder; and North and South Ireland: Before Good Friday & The Celtic Tiger by James Higgins (a photographic portfolio). Then for those interest in local politics, I wrote State Elections in Lowell: 1970-2020 which is available as a print-on-demand book from Lulu.com.