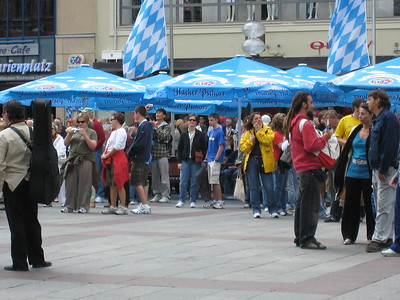 The blue and white colors of Bavaria

Tina is from Bavaria. A few years ago, she was sent from Germany to work as an intern at the Puma branch in Westford where my wife worked. Puma is a German company. My wife, Olga, became friendly with Tina, and we helped to find her a place to live and a car. One August, two years later, she visited us with her fiancé, Sigfreid, or “Siggy.” They stayed with us for a few days at the beach, and then, after a visit to Montreal, came back and stayed with us a few more in Lowell before returning to Germany.

When Tina told us that Siggy was, at 33, a thirteen-year veteran of the German army who had been stationed in Afghanistan, I imagined one of those stern, highly disciplined German soldiers out of The Guns of Navaronne. I thought of Basil Faulty and I told Olga, “Don’t mention the war.”

Well, Siggy looked the part. Tall, blonde, blue-eyed. But that was about it. He wasn’t at all the uber-disciplined German I’d imagined. At the beach, he put a foot in the water, looked at me, and said, “I cannot go in ze water.”

“Because I am…”  He called over to Tina, ‘How do you say Schwächling?”

“I am wimp. It is very cold.”  I hit it off with Siggy right away. He spoke near fluent English, and yet he was bewildered by American culture. The first night they arrived at the beach, we sat at the kitchen table after dinner drinking a Harpoon IPA, which by the way, he thought was very good. He pointed out the white and blue checks of the Bavarian flag at the top of the label, something I’d never put together.

Then he began to ask me about some troubling aspects of American culture. “Peoples here sometime zat I do not know on ze street zey say, ‘How are you? Hi! How are you?’  What iss ze correct response to zis?  Zey want really to know about me?”

“No, Siggy, not really. Just say fine, or whatever.”

“Now I haf heard in Germany zat ze best way to greet ze Americans now is to say, ‘Yo, wuss up?’”

“Yes, of course. Now iss it normal zat a woman I don’t know calls me ‘honey’?”

“Tina and I were at ze movies ant a woman came up and she says, ‘Honey, can you, ah what was ze word…ferzetsen…”

“Yes. Can you move over, honey? You can call people you don’t know ‘honey’?”

“She can call you honey. You, however, should not be calling women honey.”

“Hmmm. Also, in Germany, people would not move over for you at ze cinema. Zat is your seat. You pay for zat seat and ze price is according to ze seat, so no one will move for you.”

He had a lot of questions like that. Later, Olga said, “Tina and Siggy, you guys can sleep in here.”

Siggy looked startled and said, “Oh, it’s ok to call a man and a woman ‘guys.’  I sought guys was only for males.”

“You can answer that one, honey,” I told my wife.

Tina had lived in the States before, but Siggy was continuously trying to make sense out of it all. On the news the next day, there was a story about a woman who was viciously attacked by two pit bulls that broke into her house through a screen door. Siggy said, “We have not zis problem in Germany. Zey attacked some children so now zey are illegal. Why don’t you make zem illegal here?”

“We don’t seem to be able to do things like that, Siggy.”

Sometimes I had to smile as he translated German idioms into English. I asked him one day, “Was Franz Schubert German or Austrian?”  His brow furrowed and he said, “Hmmm. Now you haff really caught me on ze wrong leg.”

I told him a lot of American jokes, which would make him slap the table and wave his arms in front of his face and say, “Oh, it’s too much.” One night when Olga and I and Tina and Siggy went out to dinner, I said, “Siggy, tell me a German joke.”

He frowned for a minute, and then said, “Germans are not really funny people.” Ironically, that cracked me up.

I gave them a ride to the train station one day when they were going into Boston. Siggy was amazed that I brought a cup of coffee to drink on the way. Apparently, no one in Germany would think of doing such a thing. “We haff not zis mentality to drink coffee in ze car. You drink coffee at home and zen you go out, but you don’t drink a coffee while zat you are driving.”

“So, you have no drive throughs for food and coffee?”

“I sink ziss would be very dangerous.”

“Of course, all of your cars are standard so it’s harder to drink a coffee and drive. Do they sell any automatics?”

“No, no one would buy zem because petrol is very expensif ant ze automatic cars are not efficient.”

It’s amazing how spending a few days with people from another culture can get you to take a fresh look at your own culture. Little things surprised me. Germans don’t eat peanut butter. They put a chocolate spread called Nutella on their toast. There are no sports teams in German schools. If you want to play soccer, or tennis, or ski, you join a club. School is for learning. What a crazy idea.

One day at the beach, Siggy asked my twelve-year-old daughter Molly, “Are you reading any good books?”

“Oh yes, I’m reading about a girl whose parents were killed in the Holocaust…”

I grimaced inwardly, ‘Don’t mention the war!’  And then I thought how strange it was that sixty-two years after a war that ended thirty years before this young man was born, it should still lie in the back of our minds as a thing that could not be mentioned around him. What a heavy weight of history young Germans have had to carry. But Siggy only said, “Oh, zis must be a very sad book.”

Before they left, I asked Siggy and Tina what had surprised them most about the U.S. Tina said, “In Boston eferyone was wearing Boston Red Sox caps and jackets. Bayern Munich is our soccer team, but if you walked around wearing Bayern Munich hats and sweatshirts, people would think that you are very strange.”

“In New York,” Siggy said, “it started to rain. It was only raining for five seconds, and all of zese people appeared selling umbrellas. They just appeared like mushrooms in ze forest. Germans would never be so…wie sagt man einfallsreich…”

“Yes. Germans are not so enterprising.”

Tina and Siggy brought us a gift from Bavaria, a little woodchuck in Alpine regalia holding an accordion. When you push a button on his foot, he plays a lively beer hall dance tune. At the beach, when Tina and Siggy and Olga and I were sitting around the table swapping stories, I liked to punctuate a funny story by pushing the woodchuck’s button. I hope to see them again sometime. And just in case, I’m learning the appropriate phrases:  Das mussen wir begiessen. That calls for a drink! Take it away, woodchuck!

3 Responses to Siggy and Tina