This week we feature Peter Sirr, a well-known poet, and now podcaster.  He and his wife, poet Enda Wyley, are hosts of the lively program, Books for Breakfast, which airs every Thursday morning and includes a “Toaster Challenge” in which guests present a favorite book in the time it takes to make toast.

In addition to select readings from his latest collection, The Gravity Wave, is his poem: “Whatever you were.” The poem, as eerie as a “black road suddenly crowded,” recounts unexplained events one night while Sirr was out walking his dog. It is also the subject of a film by poet Mark Granier and filmmaker Fiachra MacAllister, “About Ghosts: Whatever you were,” which we are pleased to present.

“ABOUT GHOSTS: WHATEVER YOU WERE,” a film by Mark Granier and Fiachra MacAllister, based on Peter Sirr’s poem “Whatever you were.”

“Whatever you were” by Peter Sirr

Whatever you were
you scared the dog
and made him whimper

or you were nothing
neither curse nor blessing
you were

yourself purely, your eyes blazing
caught in the porch glow
where you circled behind us

to take us in. Cold-eyed
briefly curious
and quickly gone

you left behind
a living dark, the black road
suddenly crowded

from “The Different Rains Come Down,” in The Thing Is, Gallery Press, 2009

This reading was recorded as part of the 2020 Farmgate Café Poetry Award and appears here with permission.

Breakfast is over, you’ve gone to the hard world.

He flails in the waves, a towering headland

staring him down. Where’s help here?

The dog sprawls on the couch, lost in a dream

of toast and cats. A fruit fly climbs a jar

to dangerous honey. I lift my cup and a star

explodes, a meteor crashes into the moon.

A blue alien looks out along his slice of time.

He’s going to school, maybe. When he comes back

the future will already be over. Only Ulysses

will still be here. He’s found a riverbank now

and friendly leaves. Athena rains down sleep on his eyes.

How many are there? I glance like an actor

Are we the set they’re looking at?

We don’t seem to have entered yet

or they don’t see us. The road

is beyond them. I slow the car.

I don’t want to count deer, I want

this currency to fall between us

where we step invisibly from the car

slipped from ourselves to kneel

grass-lit and concentrated, close to a road

that keeps wobbling and clarifying

like the rim of the world or the end of speech.

Some say a fleet of ships

some streets in May

some say blood some wine

a summer sky some say

hawk in flight some oak

I think of you   leave

the torn world to brood

and stew   if Helen

can do it so can I without

a thought or turning back

swooping from the air

pinioned to the ground

my own hawk tree

to its shimmering coast

some a kestrel hovering

some say silk some snow

of winter meadows    but I

I say it’s cold outside

these landscapes will return

it’s the room that havers   the bed

that will abandon us

some say run some stay

but I    I think of your hands

your lips fly your heart

some say earth some sky

some hesitate some fly 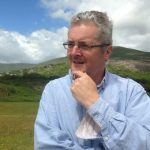 Peter Sirr has published ten poetry collections, of which the most recent are The Gravity Wave (2019), a Poetry Book Society recommendation and winner of the Farmgate Café National Poetry Award, and Sway (2016), versions of poems from the troubadour tradition. The Rooms (2014) was shortlisted for the Irish Times Poetry Now Award and the Pigott Poetry Prize. The Thing Is (2009), was awarded the Michael Hartnett Prize in 2011. His novel for children, Black Wreath, was published in 2014. His radio dramas are broadcast on RTE, the national broadcaster. His most recent, Krakow, was shortlisted for the New York Radio Awards and Irish Music Rights Organisation Radio Drama Awards. He teaches literary translation in the Centre for Literary and Cultural Translation, Trinity College and is a member of Aosdána, the Irish Academy of Artists. With his wife, the poet Enda Wyley he co-hosts the podcast Books for Breakfast ([https://booksforbreakfast.buzzsprout.com]). Books are available from Gallery Press: https://www.gallerypress.com/authors/o-to-z/peter-sirr/