Joe Blair of Iowa posted this lyrical prose on Facebook today. He allowed us to reprint it here. He’s got roots in Greater Lowell and is a past contributor to the Howe blog. Joe is the author of By the Iowa Sea: A Memoir (2012), which O, The Oprah Magazine described as “so raw and true you’ll gasp.” 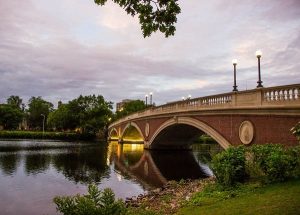 I REMEMBER WAITING for my girlfriend. It was an evening in early spring. The bench beside the Charles River was painted turnpike green. The sun was setting and the air temperature was diving. I was still wearing my Tread Sox tee shirt and baseball knickers and I was wishing I had brought my blue and white flannel shirt. I’d walked down from Magazine Beach, where we’d had practice. The infields were the worst at Magazine Beach. Lumpy clay. You needed to treat each ground ball like a shot on goal. Crouch down. Knees together. Protect that five hole. Sometimes you could glove the ball. Most times you settled for blocking it, then picking it up as quickly as you could and chucking it wherever you needed to chuck it. Sometimes you could charge it right off the bat, but that was risky because even the grass was lumpy. I waited for my girlfriend. We were supposed to meet here. This was our bench. In this ratty little park. On the Cambridge side. I imagined her getting off work. Punching out. Walking along the path. Almost here. I imagined her approaching. Should I pretend to read a book? I imagined her arriving. Maybe we would be mistaken for Harvard students. Maybe we would someday actually be Harvard students. I imagined the great university shining its light upon us. Including us. The moon was brightening up. And Venus was down and to the right. The sun was only a rumor of color now to the west. I was cold. My blue and white flannel shirt would have been smart. I waited for my girlfriend. The English major. At U Lowell. The woman I would someday ask to marry me. Deborah. The woman who would say yes. I looked at the moon. A parenthesis. And Venus. A period.
I don’t remember her arriving. I don’t remember where we went. Or what we did. I just remember waiting. And those arches. And the moon and the planet. I search the park on Google maps. Here it is. Riverbend Park. Here’s the bridge. The John W. Weeks Bridge. I dangle the little man in the air and drop him there. Here’s our bench. Here the arches. The still water. The reflection. It’s enough to make my body ache.
I can’t recall the last time I waited for someone. Wondered where they were. Wondered if they’d forgotten me. Written a complete sentence. I can’t recall the last time I inhabited a space in time and didn’t think that perhaps there was another space I should be inhabiting. Or, another space I was actually inhabiting. I don’t wait. I text. I don’t wonder. I Google. I’m not singular anymore.
I don’t know if the people on Facebook are as real as the woman I’m watching through the window right now. She’s walking two dogs. Soon she will be finished walking her dogs. And I’ll be finished writing this paragraph. And this time will be past. But the words (I know they’re only electric pulses) will be present.

One Response to ‘I Remember Waiting’ by Joe Blair