Before a neck injury in 2005 Irish poet Monica Corish spent many years travelling, living and working in Africa. Based now in Co. Leitrim, in her poems here Corish brings the reader from the sublime beauty of a night spent on a mountaintop near Lokichokio in northern Kenya in her poem, “On the western shore of Lake Turkana”, to a meditation on life stages in her poem, “Once I Saw a Lioness”. In the latter poem the narrator leaves behind exotic adventures and appreciates the grace of love, and the beauty of the quotidian, in mid-life.  And finally her poem, “Maeve’s Version”, with accompanying video, grows out of Corish’s fascination with Irish myths – the poem tells the backstory of the epic tale, An Táin Bó Cúailnge, the Battle Raid of Cooley, from the legendary Queen Maeve’s fiery point of view. Monica recorded this poem for “Poetry and Story Inspired by Landscape and Myth”, a series of programs broadcast on the Glens Centre YouTube channel in June 2020. 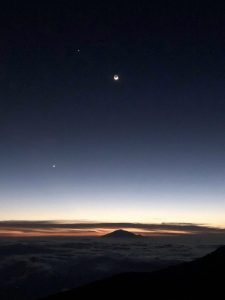 On the western shore of Lake Turkana

We climb for an hour in desert heat

Reach the plateau by six.

A cold blanket over us

All the hot stars

From now to the edge of time. 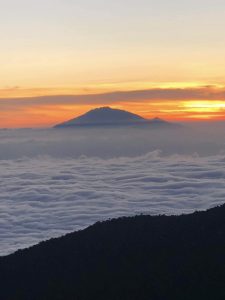 Once I Saw a Lioness

Elephants grazed in my past –

Once, up close, I saw a lioness

and her mate, drowsily digesting their dinner.

I leaned out the window, thumped

on the side of the van. They granted me,

despite my ardent desire,

I loved adventure then,

Now I stay late in bed beneath my golden duvet.

inside a line of poetry. Today it’s Richard Snyder:

You swig coffee in your room, read Delancey Place,

Eleven or thereabouts we meet in the kitchen

My younger self saw no wonder in the everyday, 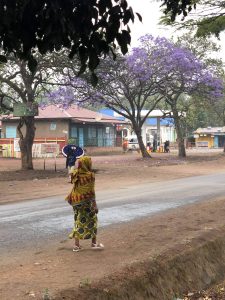 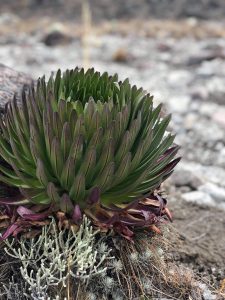 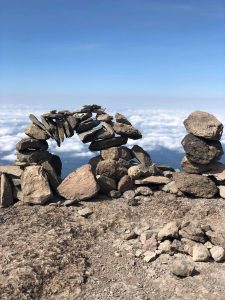 Roadside village with jacaranda trees; a Dendrosenecio kilimanjari, a succulent like plant unique to the Kilimanjaro region; stone towers on Kilimanjaro’s  summit.

I didn’t start that battle.

but not the way you think I did,

and it was never about the bulls.

You know how it is in a marriage –

is never the reason you’re fighting.

Aillil knew that in marrying me

he had married the Earth –

the curve of my mountains,

my rivers in spate,

And he knew – everyone knew –

that all his power came through me,

A comrade at my side –

the crow of a cock –

the strength of a bull –

It all went to his head.

He got cocky in a new way,

urging the men to say

We will not be led by a woman.

sire to half the calves of Ireland.

He pawed the ground and snorted

left my herd and bowed

I went to war over it.

I didn’t spill blood, and plenty of it.

My cause was Life.

He thinks he did, but he’s wrong,

and the whole Earth knows it –

born of a question

that should never have been asked:

Will the Earth rule herself?

Or will the Earth be ruled?

So. Here I am, standing upright

in my cairn on my mountaintop.

Another cock and bull story.

I am honey and mead,

I am my intoxicating, honey-drenched thighs,

rouse and body me back to life!

I am the Earth,

Any time now would be good. 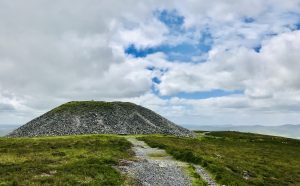 Knocknarea, Sligo. At its summit is a large cairn believed to be the burial chamber of Queen Maeve 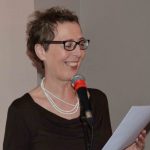 Monica Corish is an award-winning writer of poetry and short stories, and an Amherst Method writing workshop leader. She lives in north Leitrim, and is currently working on a pre-historic novel set on the Coolera peninsula outside Sligo town. She has published a collection of her poetry, A Dying Language, and poems from the collection have won the North West Words Poetry Prize and been shortlisted or commended for a number of awards, including the Hippocrates Prize for Poetry and Medicine. They have been published widely in Ireland and the UK, including in Poetry Ireland Review. Her website is www.monicacorish.ie.

Photographs: “Karanga camp above cloud level”, and other photographs in the Mt. Kilimanjaro area were taken by Kristina Beote; “Night sky” was taken by Steve Ridley; and “Knocknarea” was taken by Christine O’Connor.