Thanks to Nancye Tuttle for sharing this story which originally appeared in the Portland Press Herald. 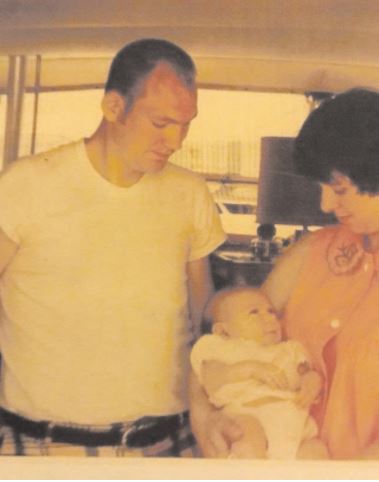 John, Wendy and Nancye aboard Marnie II after the storm.

My father-in-law’s voice boomed over the intercom from the flying bridge of his vessel, the Marnie II, as I sat frozen in fear in the salon below.

The 32-foot-long boat tossed and turned in 10- foot seas as rain pounded down, thunder crashed loudly and lightning slashed brightly through the dark summer sky.

Obeying his strict command, I sat upright on the couch. I prayed hard and gripped the side of the baby bed, where my infant daughter Wendy, just 6 weeks old, soundly slept, too young to realize the nightmare going on around her.

It was Father’s Day, 1970. We had spent the night before on board the Marnie II at an Atlantic City marina, traveling there with friends from Cape May, our home port, and giving Wendy her first taste of boating.

By midday, it was time to get underway. So, under clear skies, we headed out the inlet for the trip back home.

Then, out of nowhere, a vicious storm came up, setting the Marnie II on a course for disaster.

What to do? John and his dad, both seasoned seamen, knew we had gone too far to turn back and decided to power the boat head-on through the storm. Hopefully, we’d make it back safely with everyone dry, alive and unscathed.

Battling massive waves, they worried the boat might “broach.” That happens in storms when heavy seas and high winds push the boat sideon into the waves, causing it to roll violently, side to side, and possibly capsize.

God forbid that should happen with our baby on board. How would we keep her safe in the stormy sea until help arrived? Thankfully, the worst didn’t happen. The boat didn’t broach, as John and Dad expertly maneuvered Marnie II into the hurling waves all the way to Cape May.

As we came through the inlet, the storm miraculously stopped; the rain ceased; the sun came out.

Oblivious to the horrendous storm she’d slept through, little Wendy awoke from her nap, smiling sweetly and ready to nurse.

But that dreadful day didn’t deter our love of boating.

Later that summer, we decorated Marnie II for the Festival of Lights boat parade at Stone Harbor Yacht Club and won first prize as we did each year.

And in September, we three – John, Wendy and I – joined his folks on a 10-day cruise in the Chesapeake Bay, enjoying calm seas, sunny days and star-lit nights aboard Marnie II, a seaworthy vessel for sure. 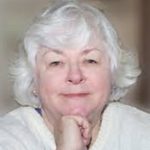 Nancye Tuttle, a semiretired journalist, lives in Wells. Wendy grew up and now lives in Baltimore, where she works for the U.S. government. Neither go boating any longer.

2 Responses to “After the Storm” by Nancye Tuttle