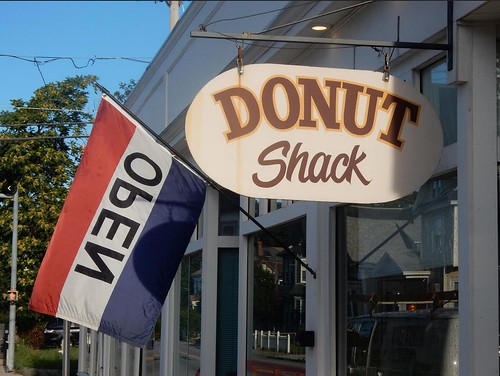 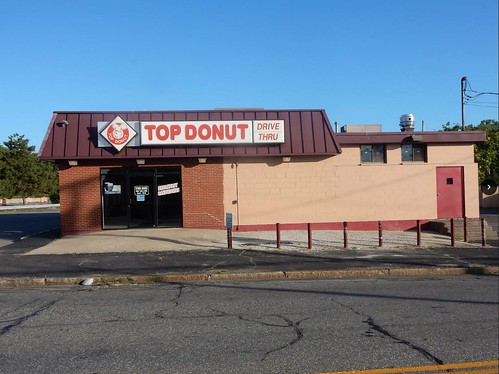 Time to Find the Best Donuts

Figuring out the best donut shop, that is not one of the multitudes of Dunkin’ Donuts in the Lowell region started out innocently enough. I had a meeting in our office building at Connector Park in the Spaghettiville conference room. I showed up at 10:32 AM with my notebook. I put the notebook on the desk and as I checked my phone, I hit the notebook, which then hit the conference room telephone, which then sent it cascading to the floor and cords went flying everywhere. Our phones have two cords coming out the back and one of them appeared to have popped out of the wall. So I plugged it back in.

The meeting was relatively uneventful. Upon leaving the conference room, I noted that a lot of people were standing around talking, which was unusual. We are software programmers and we spend most of our time staring at code on a computer screen. I went back to my desk to stare at my own computer code only to discover that my computer was disconnected from the network. I heard a coworker say something about the network being down, which seemed to explain a lot. I figured I’d run to the post office and then grab some lunch at Brew’d Awakenings. I chit-chatted with the owner of Brew’d, Andy, a bit. I had my lunch and then headed back to work. Sure enough, our network was back in business.

As I headed to the breakroom, I spotted our fearless IT manager talking with the VP of Engineering. As the IT manager passed by me, he said, “It was your boss and I’m going to go talk to him.” I chuckled a little to myself and proceeded to inform one of my co-workers that my boss had brought down the entire network.

Then this email went out to the entire Lowell Campus (121 people):

“Shortly before 11:00 this morning, someone plugged the patch cord from the ‘PC Out’ side of the phone in the Spaghettiville conference room back into a data port in the wall.

The network outage that we experienced this morning was caused by a network loop.

Plugging this cable into the data port in the conference room caused the entire Lowell network to become unavailable for an hour and a half.”

My boss had booked the room for our meeting. That’s why he was blamed. I wasn’t chuckling anymore. I immediately walked over to IT to profusely apologize and proceeded to recreate the incident at the scene of the crime.

By the time I got back to my desk, this email had come out from the VP of Engineering:

“Sounds like someone needs to bring in donuts with sprinkles tomorrow…”

This is part of a long running joke at our office. There is an unsubstantiated rumor that someone in our office submitted an “anonymous” question for the company meeting that was read aloud by the CEO to the entire company (which had 2600 employees at the time) that went something like this: “If a person brings donuts to work, is it OK to park in the Visitor parking?” Our CEO, looked away at a Senior Executive and said – “And the answer is…” On cue, the Senior Executive says – “Yes, but only if the donuts have sprinkles on them.” Our CEO rapped on the table and gave a “Ba-da-bump!” Of course, we all laughed.

It was time to fess up. Software Engineers love to hate mysteries. I didn’t want to be the hated mystery.

I replied-all, “OK, OK. Donuts with sprinkles. Got it. Do I get to park in the Visitor parking lot tomorrow too? I knocked the phone in Spaghettiville over the edge of the desk by mistake and thought a cable had popped loose, so I plugged it back in. I thought I was ‘fixing’ the network.”

When I told my wife the story, that night, she said you should find the best donuts in Lowell. I thought that was a great idea, so I started doing the research. The reviews on Yelp indicated that “Top Donuts” at 700 Aiken St. was probably my best bet, but “Donut Shack” at 487 Westford St. looked like a contender. Richard Howe’s blog – “Doughnut Shops in Lowell” at richardhowe.com (self-referential at this point) had some very interesting comments attached to it. I’ve bumped into Richard a couple of times. He gives a great tour of the old courthouse where he serves as the Registrar of Deeds.

I don’t eat donuts, but my officemates devoured them like a hungry pack of wolves any morning that someone brings them in. The next morning, I braved the traffic at Pawtucket Blvd, Aiken and Lakeview to arrive at Top Donut and I purchased 2 dozen. I noted that it was a large operation at a busy location that I remembered as Toni’s Family Restaurant from back in the day. The donuts looked pretty good.

I headed off to the other side of the city to check out the Donut Shack. This was a much smaller operation. I had already gathered that the proprietor’s name was Eric. This friendly hole in the wall was almost full with 3 patrons at 8:30 AM. As I was greeted by someone walking out from the back I said, “Are you Eric?”

One of his patrons chimes in and says, “He’s got a summons for you!” I’ll confess to being a fan of Lowell humor. It was actually a piece of paper with my donut research.

“Yes, what can I do for you?” he asked apprehensively.

“I need two dozen donuts. You are competing for the best donut in Lowell with Top Donut. I just bought two dozen from them and I need two dozen from you. You probably want to make it a good dozen because I work for a big office park just down the street and I’m telling everyone about the competition. By the way, I notice you don’t have any donuts with sprinkles on them.”

Eric got a gleam in his eye and said, “I’m just finishing up some filled donuts out back. I’ll be with you in a moment.” As he disappeared into the back room he yelled out, “Wow! These have a LOT of filling in them!”

When he came back, we talked as he filled up two boxes with two dozen. I asked, “Do you supply the Four Sisters Owl Diner with baked goods because I notice you’re located right next to Shanahan Electronics?” For those not in the know, the Shanahan family owns the Owl Diner. My wife and I have consumed an uncountable number of breakfasts there.

“No, we supply Washington Savings Bank and we used to supply Rosie’s Bakery in Chelmsford (also affiliated with the Shanahan family). Would you like a free cup of coffee?”

“Eric, I’ve been coming here for twenty years and you’ve never offered me a free cup of coffee!” his cheeky patron piped up.

“That’s right Tom! And you’re never going to get one!” Eric says.

“I know. I figured that out ten years ago.” Tom played along without skipping a beat.

As I headed out, I heard Eric say to his lone female patron, “See that Judy? We’re competing…” he said with a smile.

Judy rolled her eyes and ruffled her newspaper.

When I got back to the office, I sent out an email to our “Lowell Campus” mailing list which read:

Or was it a Tolkien Ring?

I need to brush up on my Middle-Earth/Springfield doh!nut network history.

I found some local doh!nut shops.

This is a bake off for the best donut in Lowell.

Vote with your taste buds.

I popped into the breakroom a number of times to see how the competition was going and to my chagrin there was not a clear winner. Apparently, a lot of people were cutting them in half to sample both shops and some others were just taking one of each. I did one last check and I was finally able to declare Donut Shack the winner. There was one donut with sprinkles left in the Top Donuts box. Congratulations Eric! Unfortunately, nobody ever changed the parking policy to accommodate the dearth of sprinkles. That edict came right from the top!

Chris Geggis has lived and worked in and around Lowell since 1985.

3 Responses to Time to Find the Best Donuts