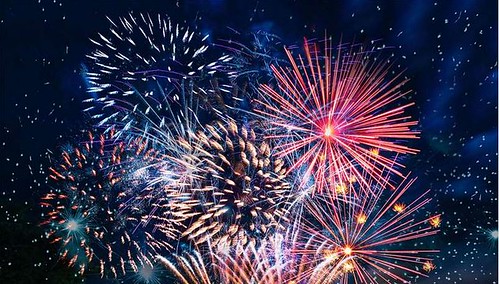 Guilty Pleasures of the Fourth

by Henri B. Marchand

An essay from Henri Marchand, updated from its original 2006 version.

As another Fourth of July holiday approaches the nightly cannonade of assorted firecrackers and whistling skyrockets has been steadily intensifying.  These illegal blasts and crackles usually reach a crescendo over the July 4th weekend and in past years would rattle the night well after area towns’ legal displays had reverberated across the valley.  This year most public displays have been canceled, creating disappointment at the lost tradition and concern that illegal launches will continue through the night.  By July fifth, decibel levels typically return to normal with the customary summer chorus of passing cars, barking dogs and singing crickets.

The salvos begin about dusk, coming from every direction until well into the evening and they carry pleasant memories edged in guilt.  Some launch from close by, the next block perhaps; others from a more distant yard or open field.  A few rise above tree tops and roof lines to mimic, in miniature, their legal cousins.  By eleven o’clock the lively barrages begin to fade but occasionally a midnight volley of bottle rockets or the solo blast of an M80 will jolt me from my dreams.

My personal use of gunpowder began legally and responsibly enough when I was maybe seven or eight years old.  Every corner variety store sold caps, dime-sized rolls of narrow red ribbons, with tiny, equally spaced blisters of black powder.  Normally used in cap guns, the blisters could also be struck with a hammer or rock to produce a quick series of reports or, if one were brave enough, scratched with a fingernail for a quick flash and hiss.  A blackened nail was proof of courage, a summer badge of honor once you had outgrown cap guns.

Later, my friends and I began our criminal celebrations, discovering firecrackers, then going on to cherry bombs and, for the boldest among our group, M80’s, also known as a “quarter stick of dynamite!”  I don’t know if they really equal 25% of TNT but after hearing one explode, you weren’t about to argue with the big kids carrying a bagful.  Cherry bombs and M80’s had the added benefit of being waterproof.  Dropped into sewers cherry bombs created water spouts; M80’s geysers that rattled the grate.  Lady Fingers were smaller versions of firecrackers, but only someone looking to get beat up would carry those around in public.  All of these coveted bomblets were sold covertly through certain area variety stores.

As is often the case with bad habits, we soon moved up to heavier pyrotechnics.  By the mid-60s my brother had discovered the ancient Chinese recipe for gunpowder.  We couldn’t believe our good fortune as we learned that the three elements needed were readily available.  One was a household summer staple, charcoal briquets; the other two could be purchased off the shelf at the corner drug store.  This was going to be the Big Leagues and we had big plans!  No more celebrating our nation’s founding with lowly M80s, we could now blend up a batch of our own Independence Day mix, pack it in toilet paper tubes and light-em-up!  Ka-boom!  Better yet, paper towel tubes.  KA-BOOM!

We mixed up our first batch, probably a pint, in our basement laboratory.  Being responsible experimenters and not knowing what to expect, we decided to do a test burn.  We piled a few tablespoons on the floor, careful to clear away any sawdust or other flammable debris.  My brother struck the match; I stood back and blocked my ears.  It took a moment to ignite but when it did the pile didn’t explode but was consumed by a hot, fast flash of flame that created billowing, sulfuric clouds of smoke.  Scared witless we dashed about, flapping our arms wildly trying to disperse the thick pall and stink that now filled the basement.  We were lucky we didn’t burn down the house and even luckier we didn’t get caught.  Fortunately we never got around to creating that paper towel Roman candle.

It’s been years since I lit a fuse and recoiled in fearful expectation.  For a time I kept a small cache of fireworks in my basement, a birthday gift from my brother.  The colorful packages remained in the basement collecting dust until I ultimately handed them over to the fire department for disposal when we moved, concerned that the lot may have gotten unstable after years in storage.

The old fears of losing an eye or a finger or of being arrested for celebrating with missiles remain.  Over the years there arrived new fears, acquired as a parent, of my children not being as lucky as my brother and me.

Still, I sometimes dreamt of piling them up on some subsequent birthday or July 4 and torching the whole lot for a belated birthday blast.

Today I’m content to listen to the nightly bombardment with guilty pleasure as the scent of cordite drifts in through open windows.

One Response to Guilty Pleasures of the Fourth