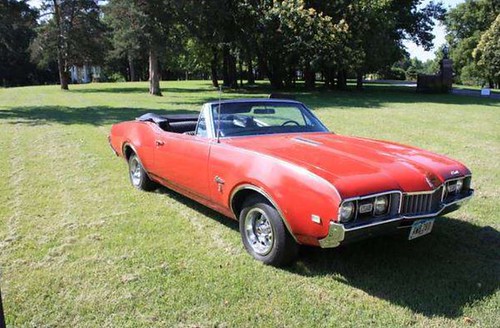 Eddie Hayward was one of my boys in high school. Big E we called him. An amiable goofball, he was tall and soft-bodied with curly brown hair. If he were an actor and still young he’d play lead in the John C. Reilly story. He was the only kid I knew in high school for whom condoms were more than just wallet stuffing. He’d had the same girlfriend since junior high. Along with the steady girlfriend and condoms, he had wheels. A big ten-year old boat of a Buick I think, or an Olds. It was long and maroon, I remember that much and, best part, it was a ragtop.

I didn’t abuse the privilege. For one thing, I wasn’t an experienced driver and I worried that I might wreck it. Sometimes though I would borrow it. I’d go to his house, give him a buck and get the keys, then cruise over to pick up whoever I was dating at the time. By the way, if a dollar sounds cheap, note that gas was 30 cents a gallon.

Summer nights were the best. The car had a wonderful mellow rumble from the dual exhausts, which made up for the fact that the radio didn’t work. I wasn’t a very good conversationalist, so what I used to do was read up on something—Shakespeare, say, or the great philosophers—anything from way back in time was good. I didn’t know squat, of course. I’d skim an entry in the Funk & Wagnall encyclopedia set my folks had got, one volume at a time at Stop & Shop. I’d pick up some names and a rough timeline. My date and I would be cruising along by the bay, the night wind soft—top down, you’d feel the flow . . . air cool and secret in the low spots, salt-scented with the sea, and I’d spin it out, what little I knew mashed together with everything I didn’t know. “I’m very interested in the Aristotelian Concept,” I’d say. “You know about that? No? Well, what the philosopher said was . . .” Etcetera.

I don’t know why Aristotelian; Socratic was beyond me—all questions & answers—and maybe Platonic made it seem off-target somehow, like I only wanted to be friends. Mainly, I liked the way the word rolled off the tongue—ar-is-to-telian.  If I’d known then of Epicurus—party time!—he’d probably have been my go-to guy.

I was a bit of a budding Buddhist, too: which is to say I knew one ancient scripture—the one about life being like the reflection of the moon on the water. Which one is the true moon?

Did any of this work? Who knows? It’s not like now. Now everyone’s got a handheld Library of Alexandria and can check the facts. You say that Aristotle was Plato’s teacher? Sure about that? Neptune has how many moons? The most grand slam homers in a rookie year?

I miss those long-gone days of 30-cent gas and the soft Aristotelian nights with Ellen or Lorraine or Lesley in Big E’s convertible, the soft wind spanking halyards on the moored sailboats in the bay, fluttering my girl’s hair, moonlight on the water.