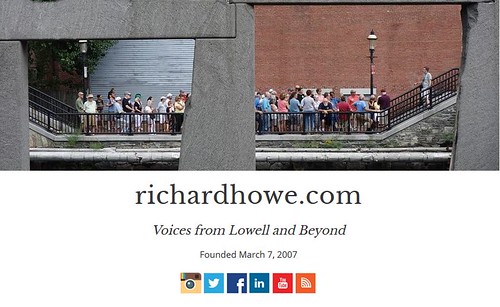 Perceptive visitors may have noticed the subtitle of this site recently changed to “Voices from Lowell & Beyond” from its longtime predecessor, “Lowell Politics & History.” Here’s how I explain this evolution on our updated About page:

The new tagline marks a shift in focus. Instead of a publication primarily concerned with the short and long view of politics in the city as well as its always fascinating history, the new magazine format will carry stories, essays, opinion pieces, poems, editorial cartoons, photographs, and more. The result we hope will be an appealing blend of thoughtful, expressive, and sometimes provocative content.

Lowell, the place and its people, will always be the foundation, but we are extending the reach to include writers and topics from the region along with national and international contributions. Lowell is part of a large bioregion fed by rivers and has long been a city with a national and world profile.

Why the change? There are a couple of reasons. For the past few years, local political news and discussion has mostly migrated to social media. Whether that’s good or bad for the community is an open question, but that is where the local political action now takes place.

At the same time, I’ve long felt that literature about Lowell and by Lowell writers–from our past and in our own time–has been under-covered in our modern media world. My suspicion that there was a wider audience for such content was confirmed on several Lowell Walks we’ve done on “Literary Lowell.” Not only was each of these walks well-attended, but the enthusiasm of the crowd for the subject matter was also inspiring (I almost wrote “infectious,” but that’s a word we unfortunately hear far too often these days).

This shift in emphasis is in keeping with my philosophy for how this blog should operate. Here’s what I wrote on that topic in my Introduction to History as It Happens: Citizen Bloggers in Lowell, Mass, a 2017 Loom Press book that featured the best content from the blog’s first decade.

Clay Shirky, a professor at NYU who writes and lectures frequently on the social and economic effects of the internet, maintains that throughout history, new technology has tended to become available long before society figures out how to best use it. Shirky says that is exactly the case with the internet which was a disruptive technology that drastically changed the media landscape. He also says that these disruptive phases of history are periods of intense experimentation. In that sense, I’ve seen the trajectory of RichardHowe.com as an ongoing experiment in community communications. The experiment continues, for everyday some new idea worth trying bubbles up.

The “new idea worth trying” that I am officially announcing today is to collect and publish some of the superb writing now being done by people from Lowell and by people from across the globe with connections to Lowell. Our recent contributors range from local greats like Steve O’Connor and Dave Daniel to regional writers like Julie Mofford of Maine and Chath pierSath of Bolton, Mass., both of whom have Lowell links in their past, and across the country to Frank Wagner in Texas and Mike McCormick in Alaska.

Inspired by the new anthology Atlantic Currents: Connecting Cork and Lowell, which features more than 60 writers linked to Lowell and Cork, Ireland, we have reached beyond the western hemisphere for contributors Sierra DeWalt in New Zealand and Malcolm Sharps in Hungary as well as editorial cartoons by Nicholas Whitmore of Newcastle Upon Tyne, England.

Our international voices will expand later this week with the launch of Trasna, an every-Friday feature edited by Christine O’Connor, Jeannie Judge, and Margaret O’Brien that will introduce our readers to Irish writers as we further explore the well-traveled route between Lowell and Ireland.

As always, we welcome reader comments which add to the chorus of voices on the site.

Finally, I once said that “blog years” were a lot like “dog years” and that with RichardHowe.com having recently celebrated its thirteenth birthday, it was one of the oldest continuously active blogs around. Its longevity is attributable to its readers. Without you and your feedback, in comments, on social media, and directly to us, we would not keep doing this. So thank you for your loyalty and your attention.

One Response to Voices from Lowell & Beyond