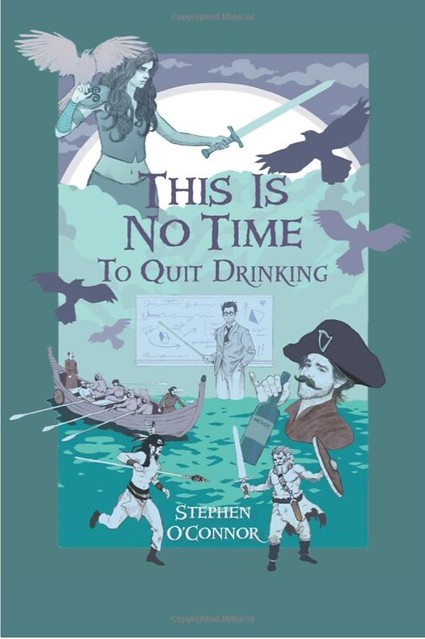 This is No Time To Quit Drinking

A novel by Stephen O’Connor

A review by Jerry Bisantz. Along with Ann Garvin, Jerry is Artistic Director of Lowell’s Image Theater. A published playwright, he is the author of “Boys at Play”, “Romance 101” and “Memories For Sale”

I’ll never forget my eighth birthday. My Dad took me, (and, me alone!) to the Alcobar, the BEST candy store in North Buffalo. He told me, “Buy ANYTHING you want.” “ANYTHING? ARE YOU KIDDING ME?” Wow!  Licorice whips, sponge candy and chocolates, hard candy, and… and… well anything! One of the great days of my young life.

The feeling I had as I left the Alcobar was the same feeling I was left with after reading (devouring, actually) Stephen O’Connor’s newest novel, This Is No Time To Quit Drinking. You want humor? Check. Romance? Check. Irish Mysticism? Check. Bad guys with  guns? Check. A searing, humorous take-down of our education system?  UH… yeah, check that one, too. And, pay attention to that one, Bartley Hannigan fires a mighty literary salvo at onerous Department of Ed policies that burden public school teachers and don’t help public school students.

Subtitled “Teacher Burnout and the Irish Powers,” No Time To Quit Drinking tells the hilariously tall tale of one Bartley K. Hannigan, teacher of English at a local high school. As if this isn’t a daunting enough challenge, he has to deal with a failing marriage, a crusty old Irish Father who is convinced he’s under an ancient Celtic curse, a haunted hill in the woods of Tyngsboro, a seventh son of a seventh son from Ballyvourney, and a Mexican stripper with a dangerous secret.

Mr. O’Connor is at the top of his game here.  A studied academic in Irish folklore, he weaves a tale which is both humorous and informative, with just enough real danger thrown in to keep the reader riveted to his or her “comfy chair” for hours on end. It’s hard to think of a better time to ride out a killer virus than to settle in with this great read.

How does one describe such a work? Is it Fantasy? Humor? Drama? In an age in which editors constantly try to pigeonhole writers into tight little corners, and force them to develop a ‘brand,” so they can put them on the right shelf, Mr. O’Connor seems to have thrown his arms up into the air, shouted “Screw it!,” downed another Guinness and written a top shelf, rollicking story that is impossible to categorize, or to put down.

And, thank God he did. A tip of the cap to Mr. O’Connor. Here’s hoping he has another one in his bag of tricks. A book of short stories, a WWII spy novel, a cerebral mystery, and now a wonderfully written comic novel. Here is an author who refuses to be pegged, and aren’t we all better off for that? Slainte!

2 Responses to A Review of New Steve O’Connor Novel