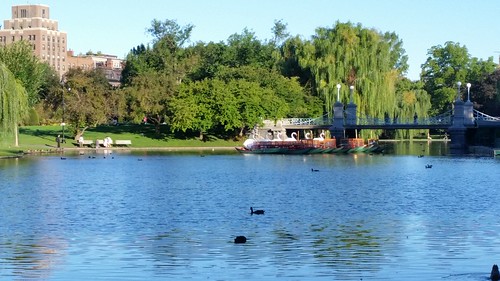 Please welcome Matthew Jones to our roster of contributors:

Something Terrible I Stopped Thinking About

A million years ago, when I was nearing my eleventh birthday, I swam in a lake almost completely sheathed by evergreens and old growth. It was man-made with a looming cement tower jutting out from the lake’s shore. The tower stretched on, connecting to a rust-coated catwalk, and going on past the trees. The words Restricted Area hung on a chain and barred us from taking the catwalk out over the water. A boy ducked beneath the hanging sign and the walk rasped and clanged beneath his measly seventy pounds. He returned red-handed and red-footed. Rust was in his hair and on his cheek. Everything he touched came back with a piece of the disintegrating catwalk.

The lake was dammed up on one side, and we were warned not to stray too far or we’d be sucked out into the ocean. It wasn’t clear if that was true. The current was too lazy. Still, water sloshed over the edge with regularity and we snuck our way to it – tempting fate. It was a game: swim-up, touch the dam wall, and avoid the plummeting bodies from the cement tower turned diving stage. It was undeniably stupid but we did it. I did it as well.

It was this stupid game that nearly killed a boy. We all should have seen it coming: under-supervised children and muddy lake water shadowed by a rusted catwalk and the cement pillar. Even still, it was the most incredible thing any of us had seen. It was a boy with blue trunks and an air bubble, ballooning his backside. Also, it was a girl with long, wet hair that she kept untied. She smacked down on top of him and cried enough to be the only draw for attention.

Friends helped her to shore and she made choking, popping sobs while favoring a single leg. “Did she hit the wall?” an adult asked. Automatically, the adults decided that’s exactly what happened, and I didn’t see the boy in the blue trunks.

“Oh, it’s swelling. Oh, god,” a woman says to herself.  “You’ll be okay, sweetie,” a woman told the girl. I looked for the boy with the blue trunks among the boys on the shore. It was impossible that he’d still be in the water. I was sure of that and didn’t panic.

“Tyler!” a man called up to the cement pillar. “Get down from there. A girl got hurt hitting the wall. We don’t need anyone else hurt.” A boy slinked down slowly. If he dove anyway, someone might’ve discovered the limp body sooner.

“She didn’t hit the wall. She hit a boy.” He said it like a complaint, like the man had sullied the good name of the cement diving tower.

Time on that beach seemed to slow. Even as a child, I could feel it. The sun above was a manifest spotlight over the clouded water and beach but a cold wind breathed through the trees. As the girl continued to cry, heads turned to the water’s rippling surface and a question was asked before it was given words. Two men splashed into the lake as a woman searched through the children.

“Who’s not here? Who’s not here?” she asked. A boy said that Brandon was missing. I didn’t know Brandon. When you’re a child, other children just appear and disappear. Wondering who’s who only occurs if you care. I probably played with him all that day but, in regards to Brandon, I didn’t care.

“Brandon!” the woman called anyway. I remember her face flushing red and her eyes watering. She was taller than us but I thought she looked as helpless as a child. She went silent as the men returned with Brandon, sopping wet and rag-dolled. The man holding him looked like a child as well, like a muscled baby cradling his sister’s doll.

He put Brandon down on the dirt shore and still he hesitated and finally, he was pushed out of the way. The red-faced, childlike woman pressed down on Brandon’s bird-bone chest and breathed into his mouth. Brandon would breathe again but he hadn’t for enough time that I convinced myself he never would.

In movies, the first breaths of drowning victims are coughs and gasps. Brandon vomited and gagged. His eyes bulged and I thought they might pop. The woman turned him on his side and slapped his back. It sounded hollow like a drum. His face was in his own sick and in the sand. The vomiting mixed with racking coughs and the adults finally thought to push us away. I could still hear him coughing even though I couldn’t see him. When I couldn’t hear him, I thought he died. I thought his coughs were too violent to be contained by his fragile chest. He must have died, must have.

We sat, dripping wet, at picnic tables. In the shadows, it was cold, and we shivered. A boy I knew a million years ago named Jeremy sat next to me. He was a blue-eyed Italian, and he wanted people to know he was Italian because, according to him, Italians didn’t have blue eyes. Jeremy said he was tired and asked to put his head on my shoulder. I said I didn’t care. It was an odd request but I thought I saw a boy die, I thought I might be responsible because I looked for him on the shore instead of in the water. Granting odd requests made me feel better.

Jeremy’s head was heavy and his skin was feverishly hot. He didn’t cry but his chest hitched again and again. His breath felt searing. I realized he was on some plateau of thought and emotion and needed his face to be hidden. He needed it more than he needed the world to know his heritage.

Red lights broke through our shade and sirens made a hysterical scream. The muscled baby ran with Brandon in his arms and I heard a little of Brandon’s cries. The ambulance left and, in a different direction, so did we.

Years later, while thinking of girls and college, and the girls I’d see in college, I saw Brandon again but only that once. I don’t know how long Brandon was without air. I wasn’t close enough to see how blue and breathless his skin became. However, I passed by him on the street. He could walk but only with the aid of a cane and an older woman that I assumed was his mother. His face was an itch at the back of my memory, something terrible that I stopped thinking about. I slowed and stared a little longer than I should have. I thought about oxygen starvation and its effects. I thought about impact trauma. As I wondered, his mother gave me a practiced dirty look. Brandon didn’t notice – too busy chattering happily about nothing. I walked on with my hands deep in my pockets and my head full of thoughts.

Matthew H. Jones writes. That’s not to be cute or flippant; it’s just accurate to his form, function, and personality. He’s self-published two novels – No Magic for Luke Peters and Somebody’s Monster -, a collection of short stories – Wish I Could Love You – and a children’s book with a writing partner – The Adventures of Bab.