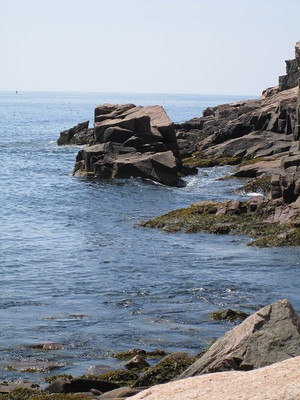 Walking along the beach with Jasmyn, holding her hand, both bundled against the mid-February air, William found himself thinking of another time, another woman . . .

“Oh my God!” Lucinda had squealed. “Thank you!”

William blushed when she kissed him. “It’s only glass.” He’d been careful to pitch it between modesty and outright apology.

“It’s as good as a diamond, or a pearl. Better! It’s personal and one of a kind.”

“I know you like beach glass . . .” he’d said. And, holding hands, off they’d gone, walking into the warm summer darkness of the park.

Where was Lucinda now? And Janis, Bonnie, and Gwen . . . and so many others. Fiona and Faye. He didn’t know, but he smiled at the knowledge that he had shown all of them a little romance.

He hardly could have foreseen it all those years ago when he first came upon Valentine’s Cove. That was the name he gave it later, and he had thought of it from time to time in the decades since. He’d been barely seventeen, out with his friend Ken on Ken’s boat, fishing in Boston harbor. It was hot and the fish weren’t biting, so they anchored off one of the outer harbor islands and took a break. William donned a dive mask and snorkel and swam into the cove.

Which was where he found it.

The water was clear, aflicker with shimmering bands of sunlight, and he realized that what he had mistaken for a bottom of bright pebbles was actually something else. He dove and plucked up a handful and waded ashore. It was true. Sea glass. Even the steep slope of the beach was glass, thousands of pieces, all smoothed to a velvet softness. They tinkled and shushed under his bare feet as he walked.

Later he would come to understand that it was a phenomenon of the tides and currents that somehow swept up every glass bottle tossed into the harbor—and in those days there were a lot—and carried them into this tiny cove on the uninhabited island. Some of them inevitably broke on the rocks or simply filled with water and sank, and the unceasing action of the waves did their work. William gathered up handfuls, filled a pair of plastic bags.

There were pieces of glass an opaque creamy white, and ginger-ale-bottle green, beer-bottle brown, and the cobalt blue which he imagined came from medicine vials used back in the old days at the hospital for incurables on another island. There were also rarer colors—the pale pink glass (of the kind he’d given to Molly, his first true girlfriend), ruby red, even a burnt orange—which he’d once fashioned into a necklace by drilling holes in the smooth shards and passing a strand of silk string through and presented to Dineen, whom he had almost married.

And over the years he had found that beach glass was the perfect touch of romance to give girls, and then women: a small personal treasure from the sea, each such presentation prefaced by a brief tale of his having found it only the day before and plucked it with her in mind. It wouldn’t have been good policy to tell of Valentine’s Cove and the bags of glass.

And now, after a lifetime of romancing women, he had just about exhausted his supply of sea glass. Only a single piece remained. He could no longer remember where that cove, or even the island, was. Lately he had begun to study a map of the harbor, hoping it might jog a memory of that long-ago fishing trip, but there were a lot of islands, many coves. He would even have contacted the friend, except Ken had suffered a stroke and was living on the West Coast.

So what to do? Give away this last piece to Jasmyn? She was alluring, certainly: tall, ten years younger than his fifty. She was confident, knew her own mind. And had good hair.

But suppose it wasn’t Jasmyn he would want to stay with? What if he met someone new, more exotic and exciting, younger, with better hair, next week, next month, next year?

Romance enough for a lifetime . . . and after this he was out of glass. Maybe it was a sign. Jasmyn was a prize, after all. And tomorrow was Valentine’s Day—so everything had come full circle somehow. Dammit! He’d do it.

He stopped walking. With the hand not holding Jasmyn’s he reached into his coat pocket. His heart swelling with hope, he drew out the piece of silken-soft pale green glass. The very last one. “I found this and thought of you.”

She took it, frowning.

“Whatcha givin’ it to me for?”

“You bring me out here for this? If this is supposed to substitute for real jewelry, Billy boy, forget it!” And she drew back and flung piece of glass way out into the water, where William could only watch as it sank beneath the gray waves, romance sinking with it.

2 Responses to “Heart of Glass” by David Daniel