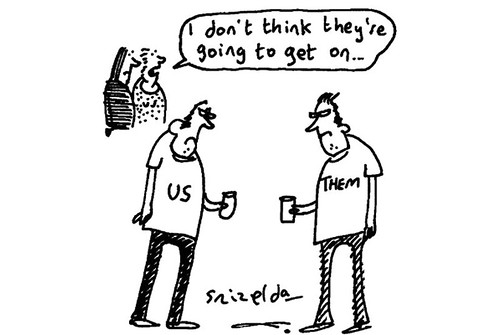 “US or Them” means No one

Shortly after midnight on January 3, 2020, a US drone attack killed Iranian general and chief military strategist Qassem Soleimani as his convoy was leaving the Baghdad International airport. The assassination follows months of escalating violence subsequent to the Trump administration’s May 2018 decision to pull out of the multilateral agreement completed under the Obama administration. While most agreed that the Iran agreement was far from perfect, it did provide a diplomatic way forward that put verifiable checks on Iran’s nuclear ambitions in exchange for the easing of crippling economic sanctions. In his obsession to put his personal stamp on everything, however, President Trump called his predecessor’s agreement “a bad deal” and moved quickly to replace it with his own so-called “maximum pressure campaign” that doubled down on sanctions with the objective of breaking Iran’s will and forcing its unconditional compliance with US demands to end its nuclear ambitions and support of militias in the region, primarily organized and led by Soleimani.

As we await Iran’s anticipated response to the US assassination of Soleimani, we have to wonder if a continued escalation of violence leading to war is still avoidable. Possibly, but not without honest introspection. In the short time we have before the Trump administration and network media double down to frame this crisis in the standard, unambiguous binaries of “us and them” and “patriot versus traitor” and in doing so attempt to dictate our understanding of what’s happening, it’s imperative that we use the moment to think this through ourselves in the interests of peace and nonviolence.

The current US problems with Iran date back to the Cold War era and the CIA orchestrated coup in 1953 that backfired and gave rise to the Islamic revolution of 1979 and infamous hostage crisis. The fatal flaw then as now with the Trump administration’s policy reversal is that no consideration was given to Iran’s state sovereignty, personal dignity or long and proud history and culture. Both instances are tragic examples of American hubris and cultural illiteracy that has lead time and time again to the misreading of the situation and simultaneous miscalculation of how to respond. To wit, instead of buckling under Trump’s maximum pressure campaign, Iran has struck back on several occasions over the last year culminating on New Year’s Eve, when Iranian-backed militias attacked the US embassy in Baghdad.

Currently, Iranians are observing three days of mourning for their beloved martyr, while presumably cooking up a plate of revenge, which, as the saying goes, “is best served cold,” that is, after the initial rage has subsided and a more calculated and presumably devastating attack can be carried out. In the meantime, the Trump administration is certainly huddled over topographical maps and debating various scenarios for swift and decisive military counter strikes.

Is there still space and time for diplomacy and a nonviolent outcome to this crisis? What would it take? The first step is not to get sucked into the “us and them” binary, “either you’re with us or against us” that only dehumanizes our adversaries and reduces them to abstract objects to be “eliminated.” Succumbing to this wartime propaganda would also make us susceptible to the Trump administration’s “win at any cost” political strategy to derail the impeachment proceedings and effectively supplant the Democratic primary race, as the majority of the American electorate would likely expect the candidates to rally around the flag and step in line with the nation’s commander-in-chief. That outcome has certainly not escaped White House political strategists.