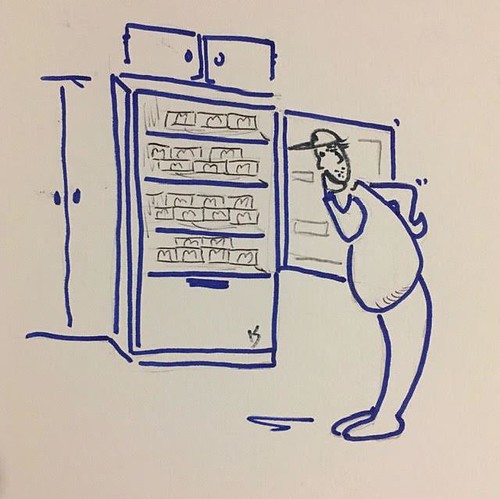 A refrigerator full of double cheeseburgers. By Ken Smaldone.

It’s not difficult to see why so many people are taken in by the argument that we should consume our plentiful reserves of fossil fuels (off shore and wherever they can be found) before making the transition to non-Greenhouse gas emitting energy & food sources. After all, wouldn’t this be the smarter way to maximize economic profits while not taking our foot off the pedal in the race against China? This is essentially the argument we are presented by the fossil fuel industry and its army of so-called “experts.” Doing otherwise, they tell us, would be like shooting ourselves in the foot or tying one hand behind our back as we try to slug it out against our arch economic rival. “Man-made climate change may be real,” they are beginning to concede, “but the dangers are not as dire as the scientific community is telling us (they have cried wolf plenty of times before). So let’s use what we have first before we start from scratch in a completely new direction.” Yes, a compelling and apparently very sensible argument. We’d love this to be true. Change is difficult, and why bother if it’s not really necessary? But let’s try looking at it another way before making a decision.

Let’s say our friend is dangerously overweight and suffers from heart disease. He’s already had two minor heart attacks, and he has a wife and young kids who depend on him. He’s gone to see 100 doctors, and 99 of them have told him that he needs to stop eating McDonald’s hamburgers immediately, even if it is his favorite lunch and dinner food. One of the 100 doctors (who happens to be on the board of McDonald’s and receives a handsome salary for doing so) tells him, “It’s all in your genes and it really doesn’t matter what you eat. Just keep doing what you’re doing.” To make matters worse, our friend has already gone out and bought a year’s supply of 50% off McDonald’s double cheeseburgers and stored them in his refrigerator. All he has to do is pull out a ready-to-go meal and heat it up 20 seconds in the microwave. So, he tells himself, “I just can’t waste all these meals I’ve stocked up. It would be a huge waste of time & money, and if I change my diet now I won’t be able to afford the new pool to keep up with the Jones’. I’ll eat all of these cheeseburgers first, put in the new pool this summer and then think about changing my diet next year.” No analogy is perfect, but this one is not far off. Would any sane person do what this poor soul is trying to convince himself to do? But that’s pretty much the story the fossil fuel industry is pushing.

You can imagine what happens next to our poor friend. The happy ending is that he summons all his will power and decides to compost all the greasy cheeseburgers and starts growing and eating more vegetables the very next day. To his pleasant surprise, he is still able to put in the new pool that summer, because he’s lost weight, feels great, has been given a promotion. The unhappy ending is…

George Chigas, Ph.D., is Associate Teaching Professor in the Department of World Languages & Cultures at UMass Lowell. George has been a contributor to this blog and has a poem in the blog anthology History As It Happens (2017). George was born and grew up in Lowell and then Chelmsford.