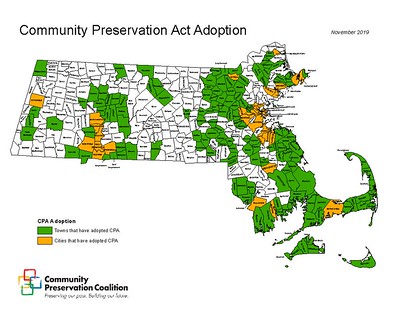 Cities (orange) and towns (green) that have adopted the Community Preservation Act as of Nov 2019.

At the November 5, 2019, city election, the voters of Lowell overwhelmingly adopted the Community Preservation Act. There were 5,026 votes in favor (58 percent) versus 3,653 votes against (42 percent). Of the 33 precincts in the city, 29 voted Yes and only 4 voted No. This makes Lowell the 176th community in the Commonwealth of Massachusetts to adopt the CPA.

The Community Preservation Act was signed into law in Massachusetts in 2000. It allows the residents of municipalities to vote by election referendum to raise property taxes by up to 3 percent with the money so raised dedicated to preservation of open space, creation of affordable housing, preservation of historic sites and creation or improvement of outdoor recreation facilities. As an incentive for communities to adopt the Act, the state created a Community Preservation Trust Fund to contribute state money to funds raised locally.

The money for the Community Preservation Trust Fund comes from a surcharge on documents recorded at the registry of deeds. Up until now, the surcharge on most documents has been $20. When the Act was first adopted, a combination of a supercharged real estate market at that time and the scarcity of communities initially participating in the CPA allowed the state match to be 100 percent of the funds raised. But more recently because of a lower volume of documents being recorded and more communities participating, the match has dropped to about 20 percent.

To remedy the reduced matching amount, the state legislature recently voted to increase the registry of deeds Community Preservation Act surcharge from $20 per document to $50 per document. This increase takes effect on December 31, 2019. Since the adoption of the Community Preservation Act in 2000, the owners of real estate in the Middlesex North District have contributed more than $27 million to the Community Preservation Trust fund through registry of deeds document surcharges. Through this November, $989,820 in CPA surcharges has been collected in 2019. If CPA collections in December remain steady, the total amount of surcharges collected in 2019 should be approximately $1,079,000. Had the increased surcharge amount that takes effect on December 31, 2019, been implemented a year ago, the amount raised in 2019 would have been $2,699,500, an increase of $1,619,700 over the amount actually collected. With the real estate market showing no sign of slowing, the amounts collected in 2020 should be comparable to this 2019 projection. Consequently, the amount of the state’s matching payments to communities that have adopted the CPA should be appreciably higher in 2020 and beyond than it has been in recent years.

Back in Lowell, the city’s Law Department is now drafting a local Community Preservation Act ordinance which will create a Community Preservation Committee. Once formed, that committee will entertain proposals for the use of the funds raised each year. The Lowell referendum question was for a 1 percent surcharge on property taxes with exemptions for the first $100,000 of value, for all commercial properties, for low income properties and for low and moderate income elderly properties. This is expected to raise $700,000 annually plus whatever amount comes from the state matching fund.

NOTE: An earlier version of this article appeared in the December 2019 edition of the Merrimack Valley Housing Report which is jointly published by UMass Lowell and the Middlesex North Registry of Deeds.