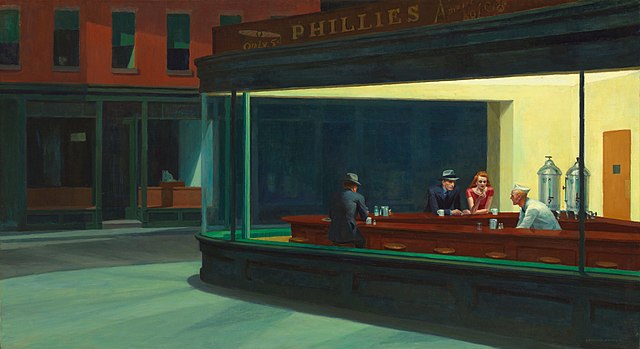 The Waitresses of America

The trucker crumpled his napkin, dropped it on the Formica counter, and rose. “You’re brave, young lady,” he said.

The waitress smiled tentatively. “I am?”

From where I sat three stools away I saw her cheeks warm, her bashful spirit shrink. The man pawed the wallet tethered to his belt by a chain and strode tight-jawed for the cashier. I inventoried what he’d left on his plate: a half-gnawed chicken leg, fat congealed on the gray skin; some pallid green peas; a pasty dinner roll. The problem though was the baked potato. Partly unwrapped from crinkled gray foil, one bite gone, it was small and shriveled, and it was sprouting eyes.

“That was wrong,” I said to the waitress. Her eyes flicked my way. “Blaming you for the food. There’s the culprit.” I pointed. “No telling where that guy’s from, but this is Maine—if anything on that plate’s gotta be right, it’s the spud. Again, it’s not your fault, but folks come off the road looking to eat. You’re the public face of this diner. You should take it up with the chef.” A bit of her smile returned.

That was in Skowhegan. There have been other times, other places. A pizza joint outside Utica; a pancake house in Altoona; a catfish shack in Biloxi. And the time in Galveston where, after a chicken-fried steak, I inquired about dessert.

It wasn’t Texas humor. She didn’t know. I explained about the scoop of vanilla ice cream, and she was happy to bring it.

Some of the confusions are regional, or historical. Like the time explaining to a Maryland waitress that a cheeseburger “royal” used to mean with lettuce and tomato. Or that New England seafood favorites quahogs and scallops are “co-hogs” and “scollops.” And how in Massachusetts “tonic” is what elsewhere is soda or pop.

It seems most everyone’s worked in a restaurant at one time or another, so shouldn’t we all learn from each other and share the wealth? I had a kindly waitress (who reminded me of my mother) correct me in a voice as quiet as the sound of her foam-soled shoes, so as not to embarrass me in front of others, that “Croquette” was pronounced with a hard t, and not like the lawn game. I doubled the tip. Eating is the heartbeat and the breath of being alive. Kindness is the key.

Which brings me to the night I sat in a 24-hour diner with coffee. It was in Lowell, Kerouac’s town, late, just the waitress, the cook back there with his white paper hat askew, and me, nothing on the grill or the jukebox. The waitress looked tired but she never stopped: wiping down, restocking napkins and silverware, hefting a big rattling tray of downturned cups, which she stacked on a shelf above the coffee urns. No tips in any of that, but it was work that needed doing.

“Can I get you something else?” she asked me.

I said I was good for now.

“I’m going out for a smoke then—be back in a few.”

I sipped coffee, drifting, a nighthawk stuck between midnight and dawn. Outside my car sat under the diner’s sign, a chameleon in the alternating red, yellow, and green blink of the neon.

When the waitress came back I knew what kind of smoke she’d meant. She smiled preemptively. “I’m quitting the others.”

“Jury’s still out, but habits don’t change by themselves. This puts a squirt of oil in the gears. Makes the next few hours flow.”

“He okay with it?” I nodded at the man behind the grill.

“Five maybe? Which in waitress years you multiply by half your age then divide by three . . . there’s a formula.”

“Crazy busy. Then times like now you could set off firecrackers. It’s a graveyard.”

“With only ghouls for patrons.”

We laughed. Then I surprised myself. “Can I buy you a coffee?”

She shrugged. She got a cup for herself and warmed mine.

“This time of night,” she said, “I’m worn. Trouble is, I get home and I’ve got that greasy feel. A hot shower helps, but I’m wired. Don’t sleep. You?”

“There’s a bunch of questions in that, I guess.”

“He’s happily married—or reasonably. With three kids, a pot belly and a mortgage. Not that anything’s wrong with that. More than I’ve got.”

She smiled. Stitched in blue on her white blouse was “Jo.” Was she forty? Her thin arms were smooth as a girl’s, though there had to be muscles hiding in them the way she’d handled that tray of cups.

“Know what mine used to call a cheeseburger with lettuce and tomato?”

“Hmm. Is that what you want? I can tell Lenny.”

“Know what my mom called a morning cigarette and a cup of coffee?”

“I was going to say ‘not the healthiest way to start a day.’”

Which I guess is what we both were doing.

Her life, I supposed she meant. The lonely hours, the sore feet and the greasy feel. Insomnia. “Well, I better get back to it,” she said.

I thanked her for the company.

“Please call again,” she said with a weary smile.

I finished my coffee and left money. Outside, moths were bumping at the buzzing neon.  Beyond lay the siren-wailing night. I got in my car but I didn’t start the motor. It was 170 miles to Albany, I knew the route by heart, and I had all night. What were the events that had led me, road by narrowing road, to the things of my life? To all the sales travelling across the eastern U.S.? The God-blessed and sometimes cursed relationships? The small nudgings that prompted me ever closer to the solitary path I was on, like a habit? Beyond the windshield, through the glass of the diner I could see the waitress inside, Jo, doing the things a waitress does, whittling a span of time before she walked home to her place and hoped she’d fall asleep. I watched her. High overhead a quarter moon lay tilted rearward, scratching its back on the night.

I sat a while longer.

And a while beyond that.

Then I got out and went back into the diner. The waitress looked up. I put coins in the jukebox and selected some songs. Van Morrison began to sing.

I asked her to dance. Her name was Johanna.

12 Responses to The Waitresses of America