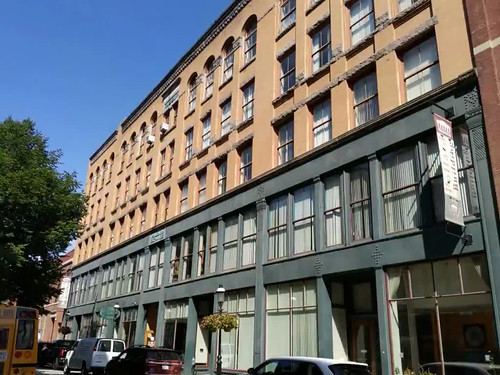 An essay from David Daniel in honor of the first day of school, with a lesson for all of us . . .

Roughly the distance from Boston to L.A. or back and forth to NYC seven times. That’s how far we went. But this wasn’t a lengthy road trip. These were unmapped city miles, walking miles, accrued at about ten per week, over fall and spring terms, across eleven years, as my students and I poked into the nooks and crannies, alleys and courtyards, rooftops and riverwalks of this fascinating old mill city.

As a teacher at the Lowell Middlesex Academy Charter School, part of my responsibility was to see that students got regular physical exercise. The class was called Mind & Motion and, in the absence of a gymnasium, the city was our gym, our library, our laboratory. We met last period of the day. I’d take attendance and say, “Let’s go out and get some air. Let’s see what we can discover today.”

Some afternoons we’d ball up at one of the public courts or in the gym at the Hellenic School, or play soccer behind Tsongas Arena. For a time I had a co-teacher and she and I would alternate taking a sub-group of the class on runs. Most of the miles, though, were walking, autumn to winter to spring, open to the gifts of the season.

And, oh, the things we saw.

Everything afforded opportunities for learning. Markers, plaques, and gravestones taught history; campaign signs provided lessons in civics; ethnic neighborhoods spoke of sociology; sunlight and shadow on old brick walls gave us art; walks along the rivers and canals—where we saw beaver, turtles, great blue herons, and carp—taught ecology. And there were the geometries of downtown buildings and intersecting alleys. Once we watched a large foam-fabric snowman floating down the Concord River on the spring flood, bound for the Merrimack, his carrot nose up-thrust like an orange mast. A meditation, perhaps, on impermanence.

Sometimes we’d buy a copy of the Sun and sit in Jack Kerouac Park. The game was: Suppose you know nothing about Lowell; what might you glean from reading a front page story? An editorial? An obituary?

The city gave us entrée. Perhaps it was the school lanyards we wore, the bright, go-ahead green of traffic signals, or the alluring light at the end of Daisy Buchanan’s dock in The Great Gatsby. We went where curiosity took us, over cobbles and asphalt, concrete and grass. If no sign expressly forbade it we often entered, always respectful, quieter than a gaggle of high schoolers is expected to be.

The mighty Merrimack was both a destination and a journey. Some days we’d play touch football on its banks. One of our balls, and more than a few of our Frisbees, floated away. If I remarked that even on his best day Tom Brady couldn’t toss a football across that expanse, invariably a student or two, taking the bait, would pick up a rock. A really good throw—and those kids had arms!—might make it halfway across before falling with a soft splash. They’d shake their heads in good-natured chagrin. Another lesson learned.

Life lessons, for me too. That the city is a web of life, of linkages, present to past and back again, time performing its magic act. A place where grunge co-exists with gloss and both keep company with beauty. A monument, not only to those who built it, and shed blood for it, whose names are everywhere, but to us who sustain it by living here now. Lessons that, like the river in its long journey, there are tumbles over rocks and spans of slack water, and, ultimately a conjoining with the sea.

“Look at these buildings,” I say as we conclude a September day’s walk along Middle Street, just in time for afternoon dismissal. “Look up. See the dates? There isn’t a person on earth now who was alive when these were built. And these’ll be here long after we’re gone—or after I’m gone, at least.”

I want to add (but it’s good to leave some things unsaid), “Make this place a choice, not a sentence. Live here because maybe you’ve been away for a while—off to college, perhaps, or national service, or a job, or for the grand adventure of love—and something in it called you back. Then, more than just a city, it’s a home.”

David Daniel taught for eleven years at the Lowell Middlesex Academy Charter School, which he calls “the best little undiscovered high school in the Bay State” and which will be starting its 24th year in a few days. He is on the adjunct faculty at the University of Massachusetts, Lowell, where he teaches creative writing.