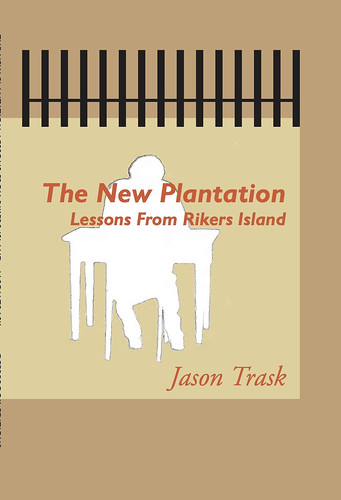 “The New Plantation” by Jason Trask

As in any good memoir, there is a sense of character arc, the memoirist transmuted by the experiences he/she has had. Trask is skillful at allowing himself to disappear and to put the reader into the situation (in this case a classroom in a jail). His focus is on the students and his own gradual reckoning of a world far beyond his own world of self-admitted white privilege.

The prose is clear and understated, letting people and circumstances reveal the story. He unlocks the security doors of Rikers Island and with an acute ear for the diction and rhythms, from memory and his journals he is able to reconstruct conversations and interactions with keen immediacy.

The story moves forward through a series of short stand-alone chapters, written with humility and, at times, startling—even shocking—honesty (as for example the time when he challenges his students to come up with, in class, a good essay topic to prep for the GED exam). Trask is shrewd enough not to let literary language intrude on his story: there are no “pretty” passages. And yet in permitting the story and its characters to speak for themselves he manages at times to achieve a moving beauty. By avoiding elevated language he elevates the subject: his students, fellow teachers, and the teaching profession itself.

From day one, the job at Rikers Island is fraught with frustrations, bureaucratic, personnel, interpersonal; and things come up that may make the reader cringe or tremble. I know I did. I also felt Trask’s frustrations with the job. “At the end of the day,” he writes, “a carpenter can see what was accomplished—a staircase built, a wall framed. By comparison the temporal increment by which teachers see accomplishment is geologic—especially English teachers.” His growth is from an individual teacher to a member of a staff, a team, a family almost, who shared a common mission.

His discovery (a discovery at the root of every successful teacher’s journey) is that connecting meaningfully with students comes only when the teacher can to see them as ends, not just means, engaged with the teacher in a common pursuit. As for maintaining classroom order, Trask notes that it “could only occur by relinquishing some . . . control to my students.” He stresses the point that he was not there as a guard, corrections officer, or social worker; he was a teacher!

On a deep level The New Plantation is a critique of the American criminal justice system as much as it is an account of one teacher’s journey. The book underscores that while time and attitudes and legislation have ameliorated some of the worst of the problems with the system, the core problem (racism) has never gone away. I think anyone with an interest in education, criminal justice reform, and gaining a better understanding of race in America will find benefit in this book.

One Response to Review of “The New Plantation”