When Dick, Marie, and I put together our ten-year anthology of writing and photos from the blog, History As It Happens: Citizen Bloggers in Lowell, Mass. (2017, Loom Press), we made sure to include poems because they had been a prominent feature on the blog for many years. Their appearance was consistent with newspaper publishing through the mid-20th century when it was common for poems to appear in the daily paper along with news articles, opinion columns, comic strips, and sports scores. There’s a poem that first appeared in the Courier-Citizen paper of Lowell displayed in the entrance to the Boott Mills Museum of the National Park Service. The last newspapers that I knew of in which poems were regularly published were the hard-copy Christian Science Monitor and the Ellsworth American in Hancock County, Maine.

Today, we’re posting a Michael Casey poem from the anthology that appeared on the blog in 2010. The poem is included in Mike’s book There It Is: New and Selected Poems (2017, Loom Press). Both books are available at loompress.com or amazon.com if you’d like having your own copy. The Pollard Memorial Library has the books if you’d rather borrow a copy. In addition to his books, Mike’s poems have appeared in Rolling Stone magazine, The Nation, and other national publications. He’s a graduate of Lowell High and Lowell Tech, now UMass Lowell, as well as SUNY Buffalo. His book of poems about his time in the military in Vietnam and stateside won the prestigious Yale Younger Poet Award in 1972. Selections from the collection titled Obscenities, which is considered a classic of war literature, are included in There It Is. “Coffee Truck” is from a sequence of poems in his book Millrat, many of which are also in There It Is.—PM 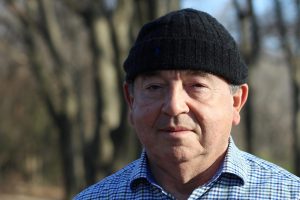 the coffee truck once ran out

of Tahitian Treat at the mill

so for a long time I used to get Wink

and the coffee truck guy told me a story

he said the mending room girls

always used to get

then for a long time

and when the guy got Halfnhalf back

they wouldn’t touch it

they was so used

to getting Polynesian Punch

so when the guy got back Tahitian Treat

he thought I wasn’t gonna touch it either

but I went right back

to getting Tahitian Treat

no more Wink for me after that

I fooled the guy

and he was surprised too