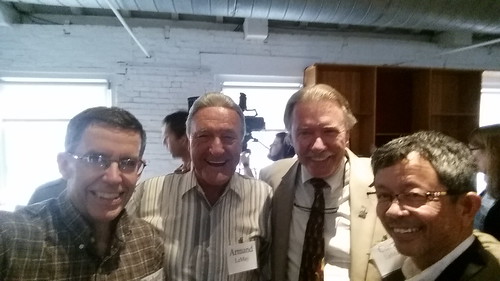 LOWELL—-Working at The Sun for nearly 60 years I had the great opportunity to meet nearly every major mover and shaker in Greater Lowell for nearly six decades. I liked most of them, admired some. They were leaders in government, business, banking, education, religion and health care. Looking back, I tend to remember most of them as they were in their prime.

When I have a chance meeting with some of the folks I haven’t seen for a long time I am always a little taken aback. What happened? Actually I have a mirror, so I understand what happened.

All that changed a few weeks ago when I spent a day in Fort Myers, Florida, with former Mayor Armand W. LeMay. He has found the Fountain of Youth. He doesn’t look much different than when I first met him more than 40 years ago.

When I first met Armand he reminded me of a big French Canadian mountain man. He had an athletic build and carried it well. The day I met him in Ft. Myers I thought the guy looks like he did so many years ago. So I was a little stunned when he told me he will be 90 years old in July.

Although the hair is gray, he probably weighs the same. His mind is still sharp and he remains up to date on national and local issues. He still loves his city.

He also appears to be the most popular guy in his Florida complex. No one gets by him without a huge welcome.

The purpose of my visit was to attend a Red Sox spring training game. Armand has season tickets to every Sox game in Ft. Myers. He is just as popular in the park as he is in his complex. He knows everyone and everyone knows Armand, including the vendors and parking lot attendants. He doesn’t pay a lot of attention to the game, but no one has more fun than Armand.

He is a remarkable, happy man. He should be. He was a good public official, a wonderful husband and father. He gave his wife the most loving care during the last four years of her life.

It was just a wonderful day with a man who remains full of life as he enters his 90th year. He is looking forward to returning to Lowell in the spring to his family home, built 100 years ago by his father.

We got a bonus that day when I continued my streak of always running into someone from Lowell wherever I go. Just as the ball game started Frank and Patty Talty, who just retired from UMass Lowell and the Lowell Housing Authority walked by. I also learned that two of our favorite people, Michael and Linda Gallagher, were at the game the day before sitting in the same seat my wife and I had.

And by the way, the Red Sox won

4 Responses to “Armand LeMay: Spring Training at 90” by Ken Wallace