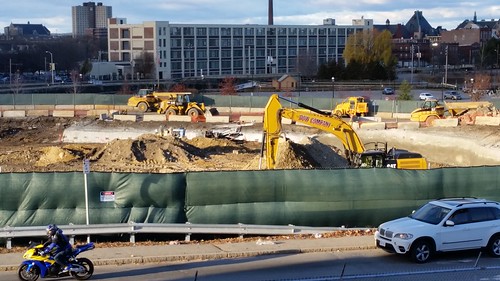 Mimi Parseghian shares some thoughts and observations on city government and some of the projects now underway.

Tuesday’s City Council discussion on the Judicial Center reminded me that the Hamilton Canal rejuvenation project started in 2004 with the $3.6 million purchase of the Fruedenberg property.  City Manager Eileen Donoghue is the fourth City Manager whose Administration is overseeing the project.  It has been a long road and we still have a long way to travel but if we put this in historical perspective, this project always has had a couple of steps forward and one step back.  The forthcoming Administration report answering the Council motions will shed some light on the timetable; the key is what adjustments the City will make to continue to move forward. It is essential to be concerned and pay attention but not necessary to panic yet.

The “single-use plastic bag ban” in Lowell seems to have introduced with little or no problems. We returned to the future, paper bags.  For those who threatened that they will not shop in Lowell, the nice paper bags now being used are larger and stronger than those small, flimsy plastic bags and they can be used again and are easily recyclable. The criticism against the plastic bag ban reminded me of the anti-lottery, anti-bottle deposit and anti-seat belt law debates.

In the near future, Lowell’s first recreational marijuana dispensary will open up.  I live ¼ mile from its location which currently is a dispensary for medical marijuana. I do not even notice the clients coming in or going out.  We have not had a single problem.  I think once it is operational, we will see that this is a controlled business and we should make sure that other licenses are awarded but granted to responsible businesses located in industrial areas.

At this week’s City Council meeting, there was a discussion on how necessary information is distributed to the public. Some residents had complained.  For those who seek the information, Facebook has a few Lowell Government sites, including City Government, the Police Department, and Recycle. The City Government Facebook site has 7,000 members. It is a great source of information.  That is how I found out the new tax rate.  You can also join two sub-group, one on construction projects and traffic pattern changes. And of course, there is the City website. The City will be expanding its out reach but we are on the right track.

Today’s Boston Globe has an informative article on the tax incentive given to the film industry by the State of Massachusetts. In 2016, the Commonwealth gave $90 million in tax subsidies to films made in the State.  The movie industry is not the only one that receives this incentive but Historic Rehabilitation, Low-Income Housing, Brownfields, Medical Device or Dairy Farming have a direct impact in our quality of life or economic development.  The film industry credits are transferable so they can be sold to others.

According to the reporters, “The program, however, has been a regular source of controversy on Beacon Hill. Governor Charlie Baker, a Republican, and the liberal-leaning state Senate have each pushed proposals in recent years to curtail or outright eliminate the film tax subsidy, only to see the efforts fail in the face of a more supportive House.”