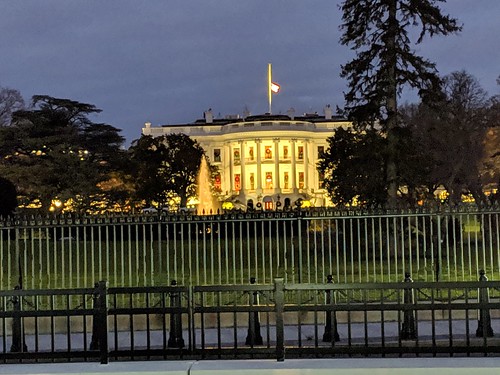 The partial shutdown of the federal government reached day 16 today. For most of the 800,000 federal employees who missed a paycheck last week, this political stunt will soon be a personal financial crisis. How many of them will miss rent payments, mortgage payments, car payments, utility payments and all the other financial obligations that make up everyday life? How long can the TSA workers who clear you through security at the airport, for example, keep their personal lives intact while being forced to work without pay?

I suppose that a president who spent his life as a developer stiffing subcontractors just sees this as business as normal. His assertion that “most” federal workers want him to keep the government closed for as long as it takes to get $5 billion to build a wall along the Mexican border is absurd, even for him.

And let me explain why I call this shutdown a stunt. Back on Wednesday, December 19, 2018 – just 18 days ago – the U.S. Senate unanimously passed a government funding bill that included no money for a border wall. They did that because they wanted to keep the government functioning and partly because the president indicated that he would sign such a bill. But then the president’s closest advisors – a collection of rightwing media people – erupted, calling the president gutless and a sellout. So the next day, he reversed course and refused to sign the funding bill already passed by the Senate, a bill which would have kept the government open and would have kept paychecks flowing to TSA workers, National Park employees and the other 800,000 federal workers now going without pay.

So the bill without border wall funding was acceptable to the president on Wednesday but became an existential threat to the country’s security on Thursday. This is complete BS. And when you catch yourself saying, “the Democrats should compromise and give in on some of the border wall money,” remember that is complete BS. The Republicans had full control of our federal government for the past two years. They held the White House, the Senate and the House of Representatives (and the Supreme Court, for that matter) and did not appropriate the $5 billion border wall while they had full control. So now, just as the Democrats take control of the House, it’s a national security crisis. Like I said, it’s BS. 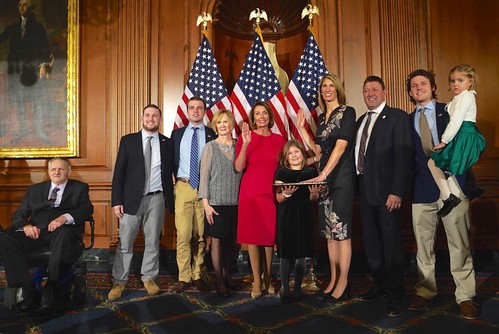 Congratulations to Lori Trahan who on Thursday took the oath of office as our Representative in Congress. It is certainly a contentious time to be in Washington but how we respond to the ongoing crisis in government is critical to the continued well-being of the country.

Congresswoman Trahan immediately co-sponsored a bill, called H.R. 1, that seeks to reform much about the way our government works. Here are some of its main points:

Campaign finance
H.R. 1 would provide for the public financing of political campaigns.
Require Super PACs and dark money political organizations to publicly disclose their donors.
Require Facebook and Twitter to disclose the funding source of political ads on their platforms.

Ethics
H.R. 1 would require the president to disclose his or her tax returns.
Stop members of Congress from using taxpayer money to settle sexual harassment cases.
Give the Office of Government Ethics the authority to conduct more oversight and enforcement.

Voting rights
H.R. 1 would create new national automatic voter registration that asks voters to opt out, rather than opt in, ensuring more people will be signed up to vote.
Restore the Voting Rights Act, end partisan gerrymandering in federal elections and prohibit arbitrary voter roll purging.
Increase election security, including requiring the Director of National Intelligence to do regular reporting on foreign threats.

Trahan emphasized her commitment to the things this bill stands for by writing an Op-Ed in Wednesday’s Boston Globe. One paragraph in particular caught my attention:

“As part of the largest Democratic freshman class elected to the House since Watergate, this Congress — and particularly my freshmen colleagues — have a mandate to fix problems in our political system, to unrig our democracy, to unmoor the entrenched special interests in Washington, and to usher in a new standard of ethics and integrity that ensures that public servants serve the public, not line their own pockets.”

I think it’s wise for Trahan to align herself with members of Congress who are willing to break out of the “this is how it’s always been done” attitude that hasn’t worked for decades. The times we live in demand bold action by our leaders and if it’s newcomers who are driving a reform agenda, we should support the newcomers. And they certainly need the help as you can see by the enormous pushback they are receiving from those who support the status quo. (For an example of that, check out Virginia Heffernan’s “Right-wing blowhards are having a tough time with this whole women-in-power thing in Congress” column in Friday’s LA Times). 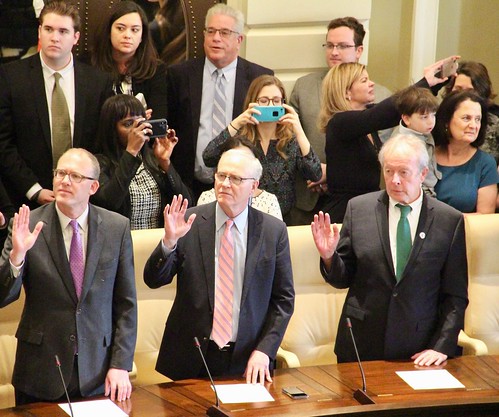 Congresswoman Trahan wasn’t the only new local elected representative to take office this week. Congratulations also to State Senator Ed Kennedy who took the oath of office on Wednesday. Although a freshman senator, Kennedy’s long experience in government – besides numerous terms on the Lowell City Council including one as mayor, he’s also served as a Middlesex County Commissioner back when there was such a thing – will make Lowell’s new state senator a skillful and productive legislator right away.

But serving on Beacon Hill is not just about constituent services and getting appropriations for projects big and small in Lowell. It’s also about taking on the big issues of the day. In that way, I expect the same forces that are shaking up Washington to do the same to state government. Many of Kennedy’s newcomer colleagues in the State Senate and State House of Representatives won’t be content with incremental change, so I expect you’ll see a more contentious atmosphere in the State House over the next two years than you have had in the past.

For all the big issues facing Congress and the State Legislature, one ingredient crucial to Lowell’s ability to thrive has been for our elected representatives on the state and Federal level to work together with the City Council on specific issues. That’s how Lowell got a National Park. That’s how Lowell got a major hotel (now the UMass Lowell Inn & Conference Center). That’s how most of Lowell’s signature achievements in the past 40 years have come about.

On Monday (December 31, 2018), Elizabeth Warren announced the formation of an exploratory committee for the Presidency of the United States in 2020. Few people around here are neutral when it comes to Elizabeth Warren. I’m firmly in the category of those who like her and the policies she espouses. The majority of Massachusetts voters, in 2012 and in our just-passed state election, feel similarly.

Still, up until the day of her announcement, I had sensed a hesitancy, almost a sense of dread among solid Warren supporters – myself included – about the idea of her running for President. The hesitancy, I think, was not based on any doubts of her ability to serve as President, or of her ability to be elected President. It was more of a recognition of the nastiness and tough battles that would lie ahead should she jump into the race.

But now that she’s in, her supporters are rallying to her cause. I actually think she has a pretty good shot at securing the nomination and being elected president. Too often, we consider presidential elections in the abstract and match the person we know up against some notional concept of who or what a president should be. But that ignores the reality of past presidential elections. On rare occasions, you find someone who you believe would be an outstanding president; I’m thinking Ronald Reagan in 1980 and 1984 for Republicans and Barack Obama in 2008 and 2012 for Democrats. But more often, we are faced with the least bad of a far-from-perfect cohort of candidates. And when the candidate is someone we know through our local connections, like Mike Dukakis in 1988, Paul Tsongas in 1992, or John Kerry in 2004, we set the bar much higher than we would for someone we only know through the media.

Here are some of the reasons I think Warren can win: She can raise an enormous amount of money; she already has a nationwide network of supporters; she’s a woman (there will be a lot of “buyer’s remorse” for not having elected Hillary Clinton in 2016); at this moment in time, she’s on the right side of domestic policy issues like income inequality; she’s smart and well organized; and most importantly, she’s a very nice person.

If you’ve never met Elizabeth Warren in person you would not know that. Certainly her portrayals by the media would lead you to believe otherwise. But I’ve never seen a politician with a better ability to connect one-on-one with the person with whom she is talking. (The only one to rival Warren’s ability in this regard is Maura Healey). Since 2012, Elizabeth Warren and I have been on the same election cycle. As Register of Deeds, I have a six year term that coincides with Warren’s term in the U.S. Senate so in 2012 and again in 2018, I’ve shared the ballot with her. That means when she’s been campaigning, I’ve been campaigning too which has given me a front-row seat to observe her and how she interacts with people. And it is amazing.

Elizabeth Warren has the personal warmth and highly developed interpersonal skills to win over voters in living rooms and coffee shops in Iowa and New Hampshire. And if she’s able to win the caucus in Iowa and the primary in New Hampshire on top of all the other things she has going for her, she will be the Democratic nominee in 2020. And assuming Donald Trump is the Republican nominee (which I actually think is a big assumption), she will be our next president.

But enough about national politics. For all that happens in Washington, it’s the decisions made at Lowell City Hall that have the greatest impact on our day-to-day lives.

With that in mind, the 2019 Lowell City Council race is off to an early start. Last Saturday, December 29, 2018, incumbent councilor Vesna Nuon (who finished first in the 2017 election) kicked off his re-election campaign with a fund raiser at Sompao Meas Hall in the Highlands. And earlier this week, Marty Lorrey, who was elected to the council in 2011 but who lost in 2013, posted the above picture on his Facebook page and let it be known that he will be a candidate for council in 2019.

While others, both incumbents and challengers, will soon make known their intentions regarding the 2019 city election, one issue that hovers over the entire process is the Voting Rights Lawsuit now pending against the city in the U.S. District Court in Boston. With the council again scheduled to go into Executive Session this coming Tuesday to discuss this case, there is some indication that a settlement may be possible in the near future. Presumably a settlement would involve a major change in the way we elect our city councilors although I doubt such a change could be implemented in time for this fall’s election.

There’s no time off for those who follow politics in Lowell.