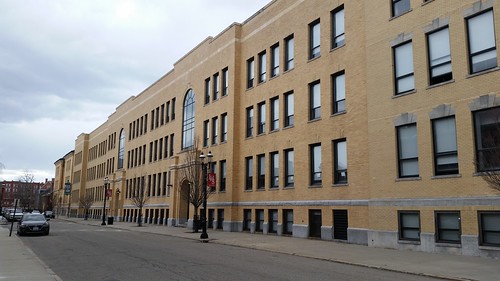 I usually don’t report on Lowell School Committee meetings, but given the financial crisis that has engulfed the school department, I thought it important to pay closer attention to how the school committee is responding. Here are my notes from tonight’s meeting. I covered the entire discussion on the recently released forensic audit of the school department, and other topics I thought worth covering.

School Committee cancels January 2, 2019 meeting due to proximity to holidays.

Forensic Audit Review. Two individuals from auditing firm do presentation on results of the audit. In August CLA was engaged to do a forensic examination of several specific items in FY18. He itemizes the things they looked at. They also looked at the budget approved for FY19. They looked for fraud and noncompliance with Massachusetts law. When they arrived in August, the Superintendent and the Finance Chief had left the city’s employment the month before. They therefore interviewed 15 different employees of the system. They heard from employees conflicting opinions about the Supt and Finance Chief. The Supt was viewed in mixed ways. The Finance person seemed “overwhelmed by the job.” There was an environment of conflict and uncertainty.

CLA did not find fraud. But they became aware of fraud with student activity funds which is now under investigation by Lowell Police. They find numerous instances of non-compliance with Mass Law. Also a significant lack of internal controls on all aspects of budgeting and spending. These things helped cause the current financial crisis.

First was the FY18 budget ended the year with a $1.4mil deficit. This was found by CLA but is not reflected by the city’s books. Cites a number of improperly charged expenses in the local bookkeeping which when properly adjusted create the deficit in last year’s budget. (Plus there’s another million deficit from food services from FY17 which makes the deficit $2.4mil).

City’s books show a surplus in food services. But they were holding three months worth of bills that weren’t posted. When these are posted there is a deficit not a surplus.

There was also significant draining of several revolving funds that had an accumulated balance of $2mil. All of this was spent in FY18.

The FY19 budget shortfall, at the time it was originally approved, had a $3.4mil shortfall. This budget continued the practice of overcharging the food service account that had been done in Fy17 and FY18, even though everyone already knew this funding was improper.

Then there were under-budgeted amounts. Things like special education transportation and tuition were listed at substantially less than they were known to cost.

Retirement buyback was also under-budgeted by trying to defer these payment to the next fiscal year. You just can’t do that.

These all add up to the $3.4mil structural deficit. In addition to that, current school management has identified other shortages that would increase this.

There are several other items that must be discussed: First is Special Education Transportation Contract. Reviews how contract with previous vendor was cancelled in Sept 2017. In Oct 2017 there were two other companies that showed interest in getting this contract: NRT and Pridestar. Both submitted proposals but the NRT proposal was never presented to the School Committee even though it was $1.9mil less than the contract ultimately given to Pridestar. “We don’t know why it wasn’t presented but it seems odd.”

Next is the Day School lease “which is pretty interesting.” A person from the Daly Group reached out to the school department. For two months there is email between the school department and the Daly Group which also owns Pridestar. The Daly Group was heavily involved in establishing the criteria for the RFP and even did a walk through of their building before the RFP was even created. The building was purchased by an LLC related to Pridestar. “It was an odd transaction. When you look at the proposal that came in from the other bidder, the cost between the Daly Group and the other bidder, the other bidder was $400,000 cheaper over a four year period.” “It’s all the involvement up front that from a perception point of view can look odd.”

Gerry Nutter interrupts to dismiss these concerns and asks why there was so much emphasis on it, saying there was no law violated here. Says he wasn’t happy to see it in the report. The CLA says it’s in there because it was part of their scope.

Nutter continues to say he wanted to see more statements of fact about instances of noncompliance with laws and contracts. He says he was expecting far more than a 20 page report. He’s also asking why it took so long. He says overall the report verifies that the finances were problematic so why weren’t there more specific examples.

Regarding previous Finance Director, he improperly held himself out as a CPA on his resume and in communications to the School Committee.

Also identified two school principals who were moved to admin posts but still worked under principal contracts. Another principal was promised additional money for overseeing a summer project. There was also overpayment of principal contracts. An employee on FMLA was paid $35,000 the employee wasn’t entitled to. There were also allegations of other instances of overpayments but they received not documentation. An attorney who works for Lowell Public Schools had his pay increased from $50,000 to $90,000 without any contract and no clear documentation. CLA says this is an example of poor internal controls; they are not alleging that the lawyer is not doing the work. It might not be a cause of the financial crisis but it is an example of poor internal controls.

Mr Hoey says he’s not happy with the report. He asks who told them what to look at and who is the legal council who was directing it? CLA says the city solicitor.

Mayor Samaras says we are concerned with process and procedures. You’re telling us that the procedures used did not comply with basic business practices. Ms. Doherty says that looking at the improprieties in contracts, it was important to include that. She says that even the checks on the city side weren’t what they should have been. She asks how much they looked at the checks and balances by the city auditor and on the city side. CLA says the problem started with the school – it never should have been submitted – but it never should have been approved by the city, either. Part of this comes from a lack of understanding of the purpose of these revolving funds as established by Massachusetts law. Part of the problem is a lack of training on what kinds of costs are allowed under the law. If you knew that you would not have made these kinds of transfers.

Ms. Martin says the most important use of this audit is to inform changes going forward. She asks what kind of precautionary policies can be put in place that would “keep the system from being played this way.” We raised questions and concerns at the time but they moved forward because of majority votes at the time. But these go beyond this. They’re about compliance with the law that go beyond our personal feelings for individuals and vendors. Maybe the Finance Subcommittee will take it up. This has been a cataclysm for our district. This audit validates many of the questions that have been asked by members of this committee but unless we make some systemic changes, it will be for nothing.

Mayor agrees. Says we have our findings but now what do we do about it. We have to look at our finances and our procedures. Our constituents demand a lot more than what we are showing. Even if we have to hire an independent company to advise us we should.

Mr. Nutter asks to here from the Superintendent who says they have already started putting in some of the internal controls. Staff has been sent out for training. There are also a number of checks and balances we’ve put in place. We provide backup documentation when we give you a report. That’s just a few of them. There will be more to present to you in the near future because we are still discovering things that need to be addressed.

Mr. Descoteaux says we have to depend on the school department administration on this. Mayor Samaras concludes the discussion on this issue by saying how we proceed from here is the most important thing.

Mr. Nutter thanks Ms. Doherty for speaking out on the Medicaid reimbursement issue before the council last night and notes that he found some of the councilors to have treated her poorly. He says other communities share the Medicaid finding with the schools. The way it’s handled by the city makes it seem like double dipping by both keeping all the Medicaid money then charging the schools for the salary of nurses. Ms. Doherty asks the School’s Finance Person about the city council’s position that it is unlawful for the city to share the Medicaid money with the schools. Ms. Turner says that the law does not require the city to share the money, but the city may share the money and many communities do. She says the schools should continue pursuing this with the city. Ms. Turner then adds that the grant should have gone to the school department even though it had to be funneled through the city. Ms. Doherty asks Mayor Samaras about the School Committee specifically asked for a demand for that money but the motion that was filed with the council asked for a report from the city manager rather than a demand for the money. She says when they spoke with councilors after the meeting there was some confusion. She says Councilor Kennedy says they should have specifically asked for the money. Mayor Samaras says he will file a more specific motion for the next council meeting.

Asst Supt of Finance informs committee that Asst HR Director recently resigned so she says it is urgent to post the HR Director job as soon as possible. Ms. Martin reminds everyone that last spring the committee discussed what kind of efforts should be undertaken to find a person for that job. Supt reminds committee that the funding for an external search was cut by the school committee in the first round of cuts. There was $30,000 budgeted for recruitment. For now, committee votes to authorize posting of Human Resources Director position. Finance person next says the amount of “bad bills” continues to grow because they keep getting more bills. A “bad bill” is a bill from a prior fiscal year that was not paid on time. They can’t be paid from current FY funds. They have to be paid out of city’s “free cash” accounts. The amount now is up to $218,000 and it keeps growing.