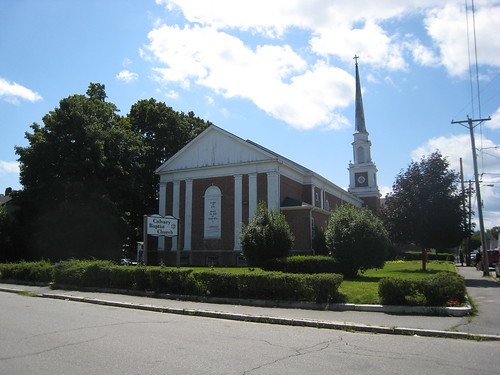 Lowell—-My grandparents came to Lowell from Prince Edward Island, Canada more than 100 years ago.
Since that time, five generations of our family have called Lowell home.

Earlier this year. My family was the last of the clan to leave Lowell. My wife and I now spend the winter in Florida and the summer in North Hampton, New Hampshire. It has been an adjustment.

Hurricane Michael was just hitting the Florida Pan Handle when we arrived at our house, hundreds of miles south of the heavily damaged area. Several days later, while attending church, there was a plea for volunteers to go to Panama City to help with disaster cleanup of damaged churches and homes. I was among 75 people who signed up that morning.

A few days later I got a call from the people setting up teams who would sign up for a series of trips to the heavily damaged areas of Panama City. They asked if I could go with the first group who would leave on Monday at 6 in the morning. We had to commit to staying at least four consecutive days and would be put up in a dorm-like facility about 20 miles from the city. The church intends to send teams to help clean churches and homes every week for up to six months.

Next I got an email with my schedule and instructions. I would need to wear a hard hat, have a tool belt with a hammer, chisel, a knife to cut up soggy carpeting, safety glasses, and work boots. Now, for more than 50 years I had worked at The Lowell Sun newspaper office. I never had a tool belt, my own hammer, chisel, safety glasses or a knife. But by Monday morning I met my work mates at 6 am and was fully attired and equipped.

The closer we got to Panama City the more we began to see the devastation the storm had brought to the region. We reported to a church in downtown Panama City where we got our first assignment. This was days after the storm, but the downtown area was still without electricity. No restaurants were open, trees were down everywhere, many still leaning against homes. Looking at the church, I was instantly struck. It was almost an exact replica of the Calvary Baptist church in Lowell where I had attended. I discovered the church had been built the same year as the “new” Calvary .

The old Calvary church in Lowell was destroyed in a fire in 1948 and the new building opened in 1952.
The Florida church had the same red bricks and white trim of Lowell’s Calvary. Hurricane Michael took the roof off most of the building and the 20 inches of rain left extensive damage over most of the Sunday school and meeting rooms of the church. Our task was to clean out the rooms, moving debris, tearing down remaining ceiling tiles, light fixtures and tearing up soggy carpeting. We were required to wear masks because of the  mold and asbestos issues. All the rooms had to be cleaned out so inspectors could decide if the building could be salvaged or demolished.

Watching the cleanup reminded me again of what happen in Lowell. I was six or seven years old when Calvary was destroyed and remember church members touring the site days after the fire and the city coming together to rebuilt that church. I saw the same sad look on members of the Florida church who came by and thanked us for helping with the cleanup. Watching them, I knew I had done the right thing. I was doing the Lowell thing.

I thought of the Rev. Victor F. Scalise, the pastor of Calvary, who guided the Lowell church through the disaster and rebuilding in Lowell. He had a saying–“Do good and forget it.” He encouraged church members to do kind acts, help people in need, serve your community, but, don’t brag about it. That is the Lowell way.

I experienced it all my life and can name hundreds of people in Lowell who do good deeds every day and never talk about it. My little trip to Panama City got me a new wardrobe that I must say I look pretty good in, but it also taught me that you can take the boy out of Lowell, but you can’t take Lowell out of the boy.