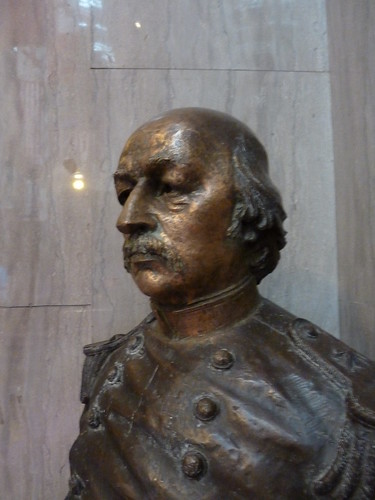 A motion by Vesna Nuon on this evening’s Lowell City Council agenda caught my attention:

Benjamin Franklin Butler (1818-1803) is arguably the most noteworthy resident in the history of the city of Lowell. He served as Governor of Massachusetts, a member of Congress and a Union Army general in the Civil War.

History has imposed a mixed legacy on Butler, mainly for his generalship in combat and for his administration as military governor of New Orleans, both during the Civil War. But I’ve come to believe that much of the negativity about Butler was driven by the same revisionist history of the Civil War that led to the erection of so many monuments dedicated to leaders of the Confederacy, monuments and statues that have over the past few years been removed or at least re-examined as historians examine more closely what actually happened during the Civil War rather than the myths that arose after the war that sought to erase or weaken the reforms that resulted from that war.

There is a portrait of Ben Butler on an upper floor of Lowell City Hall. Despite having been in City Hall hundreds of times in my life, I don’t ever recall seeing this portrait which itself suggests its placement is somewhat obscure. And the text of the label that accompanies the portrait is uninspiring, at best. Here’s a photo of that label: 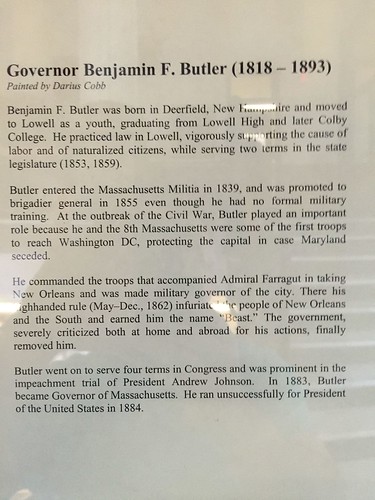 It is time for a reassessment of Ben Butler and his legacy. With Butler’s 200th birthday, November 5, 2018, just having passed, the time is right to begin this project.

To me, Butler’s most momentous accomplishment came in May 1861 when, as the commander of the Union’s Fortress Monroe, Virginia, Butler declined to return three escaped slaves to their self-proclaimed “owner”, announcing that the African-Americans would be retained within Union Army lines as “contraband of war.” Because Union policy to this point was undetermined, Butler’s decision set a key precedent that was soon adopted throughout the Union Army and Navy and, according to some recent historians, ultimately led to Abraham Lincoln’s Emancipation Proclamation.

Another of Butler’s important accomplishments came before the Civil War even began. His determination to transform the Massachusetts volunteer militia from a social club to a well-trained and equipped fighting force, and his decisive leadership in getting those Massachusetts troops to Washington DC in the opening weeks of the war, helped prevent the Confederates from seizing Washington and the country’s leadership – including President Lincoln – in a lightning strike against the undefended capital.

After the war, Butler also became a leader for the rights of women and of workers, positions that earned him the enmity of many of the upper class opinion-shapers of the day. This further contributed to the inaccurate assessment of Butler that has come to us through the decades.

Councilor Nuon’s motion is a fitting place to begin the re-examination of Butler’s legacy. The Lowell High Social Studies Department organized an excellent program that celebrated the bicentennial of Butler’s birth a few weeks ago. If the LHS historians have the time, they would do a fine job in revising the label for the Butler portrait. But that should not be the end of the project: Lowell should take the lead in re-looking at Ben Butler and his place in our nation’s history.

2 Responses to Ben Butler: Time for a Reassessment