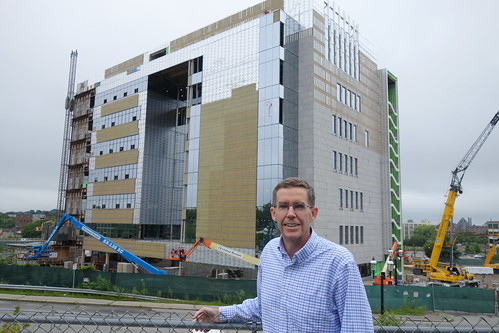 Richard Howe and Lowell Judicial Center, future home of the Registry of Deeds

Until recently, the thought of a real estate closing that did not involve dozens of paper documents that contained cursive signatures made in ink seemed far-fetched. However, conversations with certain brokers, bankers and lawyers suggest that a tipping point for paperless real estate closings may soon be upon us.

Electronic signatures have been legal in Massachusetts since the adoption of the Uniform Electronic Transactions Act in 2004 (Massachusetts General Laws chapter 110G). This statute opened the door to electronic document recording in Massachusetts, a technology that now accounts for 55 percent of all documents recorded at the Middlesex North Registry of Deeds. However, almost all of those electronic recordings have consisted of scanned images of paper documents that were signed in ink with cursive signatures. Few have been true electronic signatures meaning some mark or symbol made directly on an electronic device by the person “signing” the document.

One reason for the limited use of electronic signatures on real estate documents is because of uncertainty over the legality of a notary electronically acknowledging a signature. The sticking point seems to be the requirement in Massachusetts General Laws chapter 222 (updated by Chapter 289 of the Acts of 2016) that a notary affix his notary stamp to the document when taking an acknowledgement. But a close reading of that statute does not necessarily require the stamp or the document to be tangible objects.

A notary who made the imprint of his notary stamp on a blank piece of paper and then photographed it, could then insert that digital image into an electronic document on which he was taking an acknowledgement. Presumably this would comply with the statutory requirement that a notary stamp be affixed to the document. In this case, both the stamp and the act of affixing it to a document would be electronic.

Electronic “workarounds” like this digital image of a notary stamp plus existing statutes and available technology make all-electronic transactions feasible today. Perhaps the hardest obstacle to overcome is the unfamiliarity people feel with a new way of doing things.

Whenever I raise the possibility of all-electronic transactions, the response typically is, “but that would increase the risk of fraud!” It’s true that all-electronic transactions are susceptible to fraud, but so is every other transaction, especially those on paper. Consider what happens when a document is recorded at the registry of deeds in the traditional manner. A person no one knows comes to the office with a piece of paper that purports to be legitimately signed and acknowledged, pays the recording fee in cash, waits for the document to be recorded, and then leaves with the original. Who prepared that document? Who signed it? Who acknowledged it? Who recorded it? We don’t know the answer to any of those questions. Neither are we bothered by the opportunity for fraud at every stage of that transaction.

The main reason for our nonchalance is that paper-based recording has been around for several centuries. Our familiarity with the process allows us to put the risk of fraud in the proper perspective. But all-electronic transactions are novel and unfamiliar to us, so it is natural for us to magnify the opportunity for fraud. Ironically, the technology needed for all-electronic transactions provides an audit trail that is unavailable with paper transaction, thereby making one who uses the technology to commit fraud easier to apprehend.

Another cause for confusion in adopting all-electronic transactions comes from complex procedures adopted in other states. Virginia, for instance, allows a notary public to take an acknowledgement by video. This permits a document to be acknowledged even though the person signing it and the notary acknowledging it are not in each other’s presence. While this has some real benefits – a service member deployed overseas, for instance, could easily execute a legal document – it is more than is required to perform an all-electronic transaction.

Nearly four hundred years ago, the colonial government of Massachusetts created the requirement that a document that conveys an interest in real estate must be acknowledged to be recorded. The purpose of this rule was to curtail fraud, either in the guise of a forged signature or of an actual signature that was later denied by its maker. That requirement and the reasons for it continue today. However, there is nothing to prevent the tools that are used to perform that task to change with advances in technology.