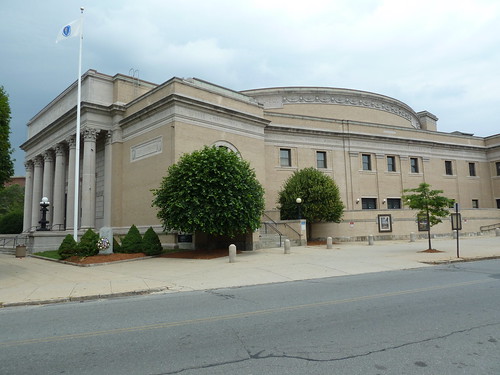 This morning the Greater Lowell Veterans Council will host its annual Memorial Day Remembrance Service. The first part of the event begins at 10 am at the Ladd and Whitney Monument in front of City Hall. There, the roll of local veterans who have died in the past year will be read.

Then, at 11 am, the service will continue at the Lowell Memorial Auditorium with a speaking program and memorial services. After the ceremony, refreshments will be served.

On Monday, Memorial Day, May 28, 2018, at 9 am, at the Centralville Veterans Memorial, a new monument to Lowell’s Normand Brissette who, along with eleven other American prisoners of war, died in Hiroshima, Japan, in the atomic bomb blast of August 6, 1945. A special guest at this event will be Shigeaki Mori, himself a survivor of the bomb, who has spent his life researching and publicizing the fate of these twelve Americans. Mori has a prominent role in the documentary film, Paper Lanterns.

I had another commitment Tuesday night so was unable to watch the city council meeting live. Because the meeting took more than three hours, when I watched the replay I divided my coverage into two parts (see Part I and Part II).

The council heard about two City of Lowell projects that are worth mentioning here:

The Tanner Street realignment will move Tanner Street where it intersects with Plain Street from its current location on one side of the Lowell Car Wash to the other side of the car wash building so that the road runs between the car wash and the VFW Building and connects with Plain Street opposite the entrance to Target Plaza. There are a couple of benefits to doing this. The first is that the current outlet of Tanner onto Plain frequently gets blocked by traffic stopped at the light at the entrance/exit to the Lowell Connector. Moving the intersection will make it less likely that this will happen. The second benefit is that traffic coming off of Tanner Street will have the benefit of the existing traffic light at Target Plaza. Current funding only covers the design work but the city seems optimistic that once the design is complete, funding for construction will be available.

The second project discussed was the parking garage in the Hamilton Canal Innovation District. This garage will cost $37.5 million which will be paid from the Parking Enterprise Fund. This garage will have seven levels and will have 930 parking spaces (but only 1200 square feet of ground floor retail space). Construction is expected to begin this October with the garage completed by the end of 2019 which will coincide with the opening of the new Judicial Center.

Another matter taken up by councilors was the disruption by protesters of last week’s Environmental Subcommittee Meeting. There were two council motions on this week’s agenda regarding this and a proposed policy from the city manager (who explained she proposed the policy at the urging of several councilors).

While the council collectively expressed its outrage and dissatisfaction at the extremism of the protestors, mostly because the protestors shut down the meeting and deprived everyone else of their opportunity to express themselves, the councilors also placed that event into the context of several decades of council meetings. They agreed that nothing like that had ever happened before so they did not want to overreact to a single incident. The motions and the policy were all referred to the rules subcommittee which will consider them at an upcoming meeting and report back to the full council.

On May 30, 2018 at 6:30 pm at Cambodian Mutual Assistance Association at 465 School Street there will be an “election lawsuit listening session” which will cover the lawsuit pending against the city by a number of minority residents for alleged violations of the Voting Rights Act.

May 31, 2018 at 7 pm, the Lowell Democratic City Committee will host a “Freedom For All Presentation” that will address the proposed ballot referendum that would, if passed, roll back rights granted to transgender people by the state legislature in 2016. This event will be at the Pollard Memorial Library’s ground floor community room and is open to all.