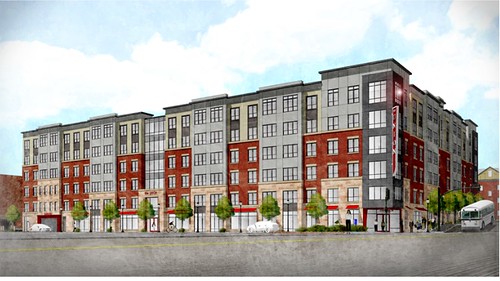 artist rendering from Merrimack Street with Cabot to the right.

The Lowell Planning Board meets this Monday (February 5, 2018) at 6:30 pm in the City Council chambers. Among the items on the agenda is “Preliminary Site Plan Application for 650 Merrimack Street” also known as The Union Apartments. The city’s website has nine documents about the project available, and the Planning Board meeting will be televised and streamed on LTC channel 99.

The former Jeanne d’Arc Credit Union headquarters at the corner of Merrimack, Cabot and Market Streets is back with another application for a private dormitory. The proposal, by Union Lowell LLC, calls for a new 6-story building, consisting of 163 dormitory units containing 466 bedrooms. The developer will provide a total of 263 parking spaces: 93 onsite; 120 at the Transfiguration Church; and 50 at the Ayotte Garage. The developer will also contribute $800,000 to a proposed (?) neighborhood parking facility.

The proposal was also mentioned at Tuesday’s council meeting with several councilors expressing their opposition to the project.

Also speaking Tuesday in opposition to the project was Patricia Coffey, a representative of UMass Lowell. Speaking for the University, Coffey stated that there is not the demand in Lowell for this type of private dormitory. She cited the difficulty the newly constructed Edge Merrimack River private dormitory (across Fr. Morissette Boulevard from Lowell High) is having in leasing its units. She also said that UMass Lowell is filling fewer dormitory beds than projected, mostly because students lack the money to pay for room and board. 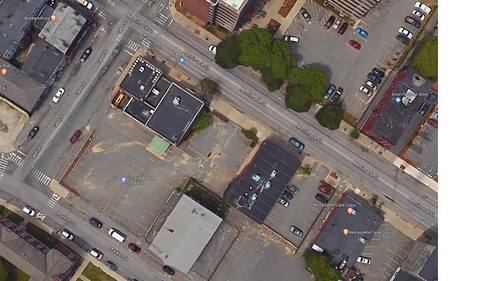 Google images, parcel in center, bordered by Merrimack (above), Cabot (left), and Market (below).

The first private dormitory in Lowell, Edge Merrimack River, which opened for business last fall, has an attractive website that proclaims it is now leasing for 2018-2019. It also promotes the great river views of the Merrimack, fully furnished apartments, high speed Wi-Fi, onsite community clubhouse and fitness center, and study rooms on every floor. When Edge first arrived in Lowell, it cited its success with similar developments in North Carolina (at Wake Forest) and in Worcester, Massachusetts (Edge at Union Station). I wrote about the Edge project (then called “Vision”) back on May 14, 2016 and on July 17, 2016 and the Sun had a “first look at the new dorm” article by Rick Sobey about Edge on July 17, 2017.

You would think that with the strong and vocal opposition of the Acre neighborhood, UMass Lowell, and several city councilors, this new project, Union Apartments, would not stand much of a chance, especially since it’s already been rejected once (rather, the applicant withdrew it once it became clear that the planning board was about to defeat it – that gave it the option of resubmitting the proposal which is what is happening now). But the fact that it’s back again in the face of all of that opposition suggests that this type of private dormitory arrangement must be a lucrative undertaking. 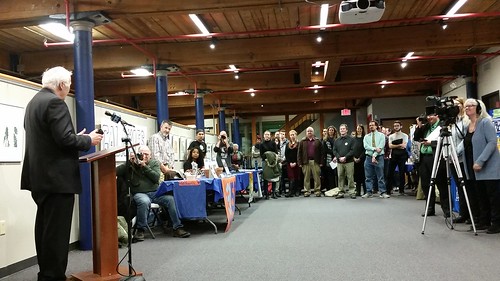 About 75 people gathered in the LTC Gallery Thursday night for a community discussion of sustainability efforts in Lowell. Co-hosted by Lowell Telecommunications and the Lowell Sustainability Council, the event brought together a number of groups that are involved in sustainability to share ideas and promote collaboration.

Mayor Bill Samaras hit the perfect note when addressing the group. He explained that when he was first elected to the city council more than four years ago, he began speaking in favor of clean energy and the importance of safeguarding the environment at the city level. The response from many of his longtime Lowell resident-supporters was something like, “Bill, focus on something important, like the tax rate.”

Samaras said the response is much different today. More and more people have seen the sustainability light, and support programs and policies that support it. Personally, Samaras says everytime he is with his grandchildren, he is reminded that his efforts to safeguard the environment today will make the world a better place for them tomorrow.

Speaking directly to those in attendance who devote countless hours to this cause, Samaras said “You are doing important work. It may feel as though politicians aren’t listening, but you have to remember that in politics, you can’t satisfy everyone all of the time. Because of that, it’s important to always do the right thing, and with your efforts on behalf of the environment, you are doing the right thing. You can help by providing us with information. People are listening now. Keep talking. You’ll win them over.”

Jay Mason, the chair of the city’s Sustainability Council, kicked off the speaking portion of the event by reminding everyone of the dire consequences of a planet that is rapidly heating. He said that one of the objectives of the gathering was to de-silo their efforts. He explained that organizations have a tendency to do their own things without regard to other groups pursuing similar objectives (that is, each operates within its own silo). He said that bringing these groups together increased the opportunities for collaboration. “We’re here to solve a problem; we have a better chance of doing that when we work collectively.” 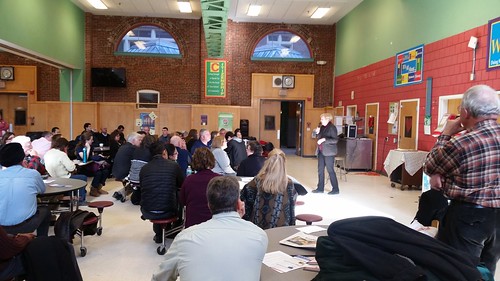 The Lowell Democratic City Committee held its 2018 caucus yesterday at Lowell High’s Freshmen Academy cafeteria. About 200 people attended. The purpose of this caucus was to select delegates to attend the 2018 Massachusetts Democratic Convention which will be held on June 1 and 2, 2018 at Worcester’s DCU Center. 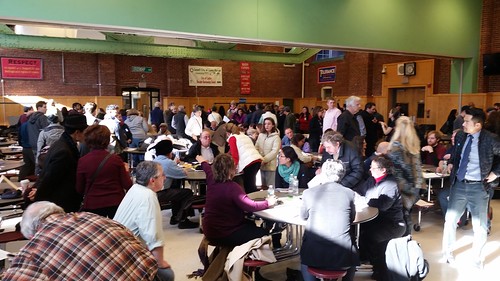 Judith Durant, chair of the Lowell Democratic City Committee, recently wrote a post on the committee’s website explaining the significance of the caucus and how it works. Yesterday was a busy day caucus-wise, with Democrats also gathering in Tewksbury, Wilmington, Tyngsborough and Carlisle. Next Saturday, Dracut and Dunstable will meet. Other area Democratic caucuses include Westford on Thursday, February 15; Billerica on Saturday, February 24; and Chelmsford on Thursday, March 1. For further information about other caucuses and the State Democratic Convention, check out the website of the Massachusetts Democratic Party. 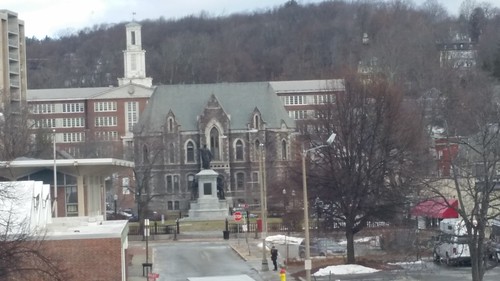 Fitchburg Gets a Virtual Newsroom

On Friday, the Boston Business Journal reported that the Fitchburg Sentinel & Enterprise (what you might call a sister newspaper of the Lowell Sun) was closing its physical office space in the city of Fitchburg and would henceforth rely on a “virtual newsroom.” The Sun and the Sentinel & Enterprise have been sharing reporters for some time (and an editor, too – the BBJ reports that Jim Campanini is the editor of both the Sun and the Fitchburg paper).

About ten years ago, the term “backpack journalism” became popular. The idea was with the miniaturization of cameras and computers, a single individual with a backpack full of equipment could be a comprehensive and effective reporter of the news. It seems like that’s what Fitchburg is going to get. It will be interesting to see how it works out. 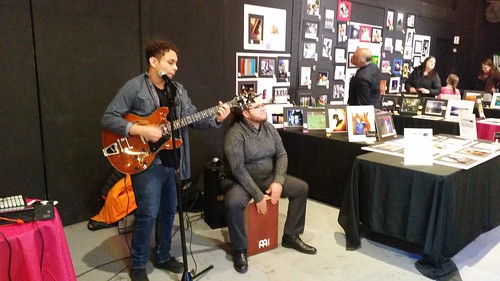 Congratulations to the Boys & Girls Club of Greater Lowell for being the host of the Northeast Regional Art Competition of the Boys & Girls Clubs of America. The contest was held yesterday at Western Ave Studios’ Onyx Room. Winning entries from clubs in Massachusetts, Connecticut, Maine, New York, New Jersey, New Hampshire, Pennsylvania and Rhode Island were featured. Hundreds of works of art were presented at the exhibit which also featured refreshments and live music. The winners of various categories of this regional contest in Lowell will proceed to the national competition to be held in San Diego, I believe. 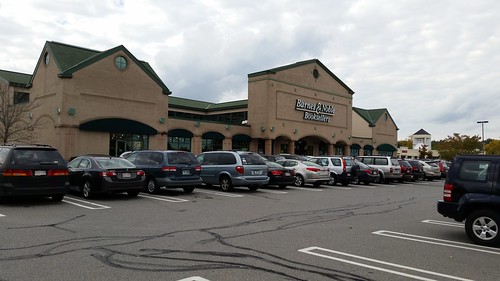 The Barnes & Noble store at 235 Daniel Webster Highway in Nashua is pitching in to help raise money for the Pollard Memorial Library so that some of the books damaged by the burst pipe of several weeks ago can be salvaged or replaced.