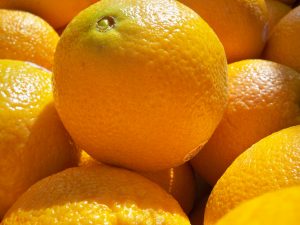 I was lucky enough to live in Southern California one year during the growing season. In fact, one night driving south on the San Diego Freeway past the old mission at San Juan Capistrano I passed a vast orange grove in blossom, the scent of orange flowers ten times more powerful than the apple blossoms I’d grown up with in the Merrimack Valley. Some of the blooming orange trees still had fruit hanging off the branches. The idea of walking into a backyard in Laguna Beach and picking an orange or a lemon off a tree seemed impossibly exotic to a New Englander. A pear or a peach, yes, but tropical fruit along the driveway? No way.