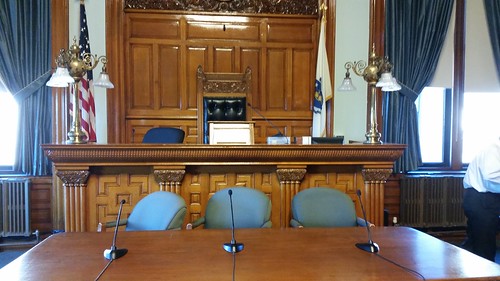 One of my earliest memories of Lowell politics is from January 5, 1970. A new city council was being inaugurated and my dad, just reelected to his third term, was going to be mayor. Or so we thought. As our family walked into City Hall for the inaugural ceremony, we knew he had five committed votes: his own and those of councilors-elect Paul Tsongas, Phil Shea, Brendan Fleming and Ellen Sampson.

As the rest of the family took seats just behind the bar separating spectators from councilors, I helped my dad carry family coats into the council coatroom adjacent to the council chamber. With just the two of us in there, Councilor Ellen Sampson entered, walked up to my dad, and said, “Dick, I’m not going to vote for you.” As an argument erupted, I left and took my seat in the family section.

For the first four ballots for mayor, there was a four to four deadlock, with Richard Howe receiving votes from Tsongas, Shea, Fleming and himself, and Armand LeMay getting the votes of Sam Pollard, John Mahoney and Leo Farley. Sampson voted for herself. On the fifth ballot, quite unexpectedly, Leo Farley voted for Richard Howe and my dad was elected mayor by a five to three to one vote.

I share this story as a reminder that Lowell’s method of selecting a mayor doesn’t always go as planned. Sometimes councilors unite behind a candidate and the vote is nine to nothing, but other times the council is split. Those splits, and even some of the votes that are unenthusiastically unanimous, can fracture an incoming council within minutes of it taking the oath of office, leaving hard feelings, and mistrust that negatively affects governance of the city.

Events of the last four days suggest that the path to the office of Mayor of Lowell in 2018 may be a rocky one. Here’s how it has played out thus far:

Thursday night (Nov 30), at 9:29 pm, the Lowell Sun’s Kori Tuitt tweeted “[John] Leahy says he has the votes to be #LowellMA’s next mayor,” with Tuitt linking to a Sun story she wrote that said Leahy had the support of Rodney Elliott, Rita Mercier, Dave Conway, Ed Kennedy and himself. The story also quoted Leahy as saying, “I’m very excited and I’m grateful to get the votes and I’m honored to have the privilege to be the next mayor.” The story also quoted Leahy as saying, “. . . We’re going to look at the options and we respect each other’s opinions on the high school.”

But then on Friday afternoon, Mayor Ed Kennedy issued the following statement:

I am puzzled and troubled by Councilor Leahy’s most recent remarks in which he has stated that he “wants to take a look at all of the options” regarding the high school project. We have been considering all of the options for the past eight or nine months. The election results on November 7 made it abundantly clear that Option 3 is the preferred option of the people of Lowell.  A supermajority of pro-Downtown candidates were elected with the understanding that Option 3 requires six votes for eminent domain land-taking and for the loan order to pay for the project.

I think that Councilor Leahy needs to publicly clarify his position on the high school and indicate publicly which option he supports and intends to pursue if he were to be chosen as the next mayor of Lowell.

A short time after the Mayor’s statement was released, the Lowell Sun’s Todd Feathers tweeted “Leahy tells me that he is still absolutely committed to downtown option three for the high school. There were no secret deals to get the five votes for mayor, he just wanted to get potential numbers for a school at the South Common.”

Soon after that, Councilor Leahy himself took to Twitter (above) writing:

Always committed to the downtown for LHS. Sorry for the confusion just trying to do my due diligence. The voters of Lowell made it loud and clear. Option 3 for downtown.

That’s where it stands now. We shall see if Leahy’s statement is sufficient to win back the support of Mayor Kennedy.

To help put this year’s mayoral contest in historical context, here’s a look at mayoral elections since January 1996:

1996 – Bud Caulfield was elected mayor on the first ballot by a 5 to 4 vote. Caulfield received votes from himself, Richard P Howe, Grady Mulligan, Rita Mercier and Larry Martin. Steve Gendron received his own vote plus those of Matt Donahue, Eileen Donoghue and Peter Richards.

2006 – Bill Martin was elected mayor on the first ballot by a five to four vote. Voting for Martin were Eileen Donoghue, Jim Milinazzo, Armand Mercier, George Ramirez and himself. Rodney Elliott received his own vote plus those of Kevin Broderick, Bud Caulfield and Rita Mercier.

When it comes to city government, my focus on this website is mostly on the city council, but that’s only because there is not enough time to cover other aspects of city government. Much of the work that affects all of us on a day-to-day basis is done by the various boards and commissions of the city. All of their agendas are posted online. In addition, the Planning Board, the Zoning Board of Appeals, and the Conservation Commission all have separate webpages for “projects currently under review.”  Looking through some of the recent agendas and these project packets disclosed some interesting information about several projects now underway. Here’s an update on a few of them:

42 Wellman Street – This is a proposal for a large apartment building with indoor parking to be built on a lot behind Lowe’s at Chelmsford Street and Industrial Ave near the Lowell Connector. The Planning Board approved this project nearly a year ago, but the developer recently came back to the board seeking approval to move much of the parking for the facility from an inside garage to an exterior surface lot.

19 and 20 Academy Drive – Academy Drive is off Westford Street in the Highlands. It used to be known as Glacier Ave because of a large stone embedded at the end of this short cul-de-sac. At the corner of Westford Street and Academy Drive is the Montefiore Synagogue which continues as an active house of worship. However, an adjacent lot upon which was constructed a school affiliated with the Synagogue, named Montefiore Academy, I believe, is now owned by Eagle Building Property LLC, a real estate development company that proposes to build a three story building containing twelve one bedroom apartments on the site, with 24 surface parking spaces on the adjacent lot.

555 Merrimack Street – This is the site of Lowell House. Coalition for a Better Acre, in a partnership with Lowell House, proposes to demolish the existing structure and replace it with a four story mixed use building consisting of 28 residential units on the upper floors with retail space on the first floor.

351 Market St/12 Cardinal O’Connell Parkway – This building, long known as the Southeast Asian Restaurant, will hold a restaurant and a coffee shop, according to plans.

Those are just a few of the projects that caught my eye. While the agendas and “projects under review” webpages contain much interesting information, there is often a long lag in the posting of meeting minutes so the best way to learn what happens is to watch the meetings – which are all cablecast – either live or via on demand replay from the LTC website. We’re always looking for correspondents here at richardhowe.com, so if anyone would like to watch a board meeting or two and then file a report about the meeting for posting on this site, please let me know.

The end of November brought a couple of troubling statists for the Lowell real estate market. The number of deeds and mortgages recorded continues to be down substantially on a month-to-month bases, as compared to the same month of the previous year. This has been the case since mid-summer.

But the big red flag came with the number of “orders of notice” that were recorded in November. An order of notice is the document filed at the start of a foreclosure proceeding. Here are the numbers of orders of notice recorded for properties in Lowell for each month of 2017:

That’s quite a spike in the number of new foreclosures. What’s perplexing is that the majority of those 41 new foreclosures are of mortgages that were granted in 2007 or before (i.e., prior to the bursting of the real estate bubble). Have these homeowners paid their mortgages for ten years and then suddenly stop doing so? It’s more likely that they’ve been non-performing for a long time. If that’s the case, why have lenders waited so long to start foreclosure proceedings? One possibility is that bank and mortgage companies are doing extremely well these days, so their balance sheets would be better able to absorb these losses showing up on their books now instead of a few years ago. Another possibility is that those who regulate lenders may be more sympathetic to lenders now than was the case under the prior presidential administration.

Whatever the reasons behind the delay in the foreclosures, the fact that so many are showing up now, especially as we enter the slower-for-real-estate winter months, is bad news for Lowell’s real estate market and its neighborhoods. We’ll keep watching this and report back at the end of December.