By way of background, this project has been driven by a number of factors, two in particular. One is that the early-1960s Lord Overpass, which we know as a rotary elevated above Thorndike Street, is really just two bridges: one connecting Chelmsford to Appleton streets; the other connecting two sections of Middlesex Street. Both of those bridges have seriously deteriorated through the years and are in need of replacement. 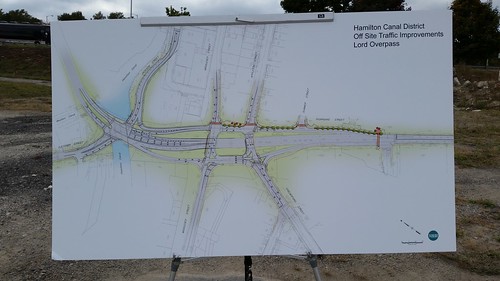 The problem with that route is that when it came time for the subject vehicle to turn right onto Jackson Street Extension, it would be crossing in front of the down ramp from the Lord Overpass, a traffic maneuver both dangerous and unfeasible. So to safely turn into Jackson Street, a vehicle coming from the Connector would have to proceed up the ramp onto the Lord Overpass (the ramp that begins right after the Gallagher Terminal entrance), pass through the lights at Appleton Street and at Middlesex Street, start down the ramp from the Overpass to Thorndike Street inbound, but then turn right onto Jackson Street.

Can you imagine someone new to Lowell attempting that maneuver during peak traffic times? I can’t, and neither could the city’s traffic engineers. So that, more than anything else, convinced planners that filling in the Lord Overpass and making it a traditional, surface level intersection, was the best solution. 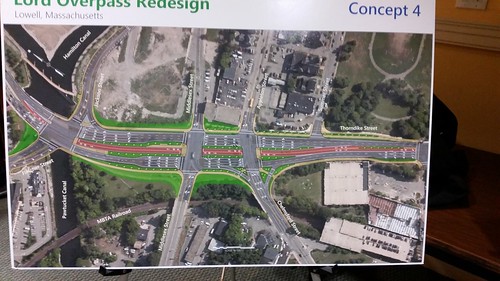 That has brought us to “Concept 4” which is shown in the photo above. This plan was introduced to the city council and to the public last fall, to excellent reviews (the council endorsed it by a 9 to 0 vote and the hundred or so people at a public meeting burst into spontaneous applause at its unveiling).

The plan hasn’t changed much since last fall. Its main features are two through lanes on Thorndike Street, both inbound and outbound, plus a variety of left and right turn lanes. Bisecting all of those Thorndike Street lanes will be parallel intersections with Middlesex and Chelmsford/Appleton. Design for this phase of the project is ongoing with work expected to commence as soon as the end of next summer with an expected completion date in 2020. 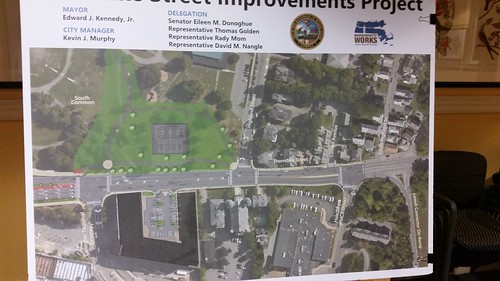 The stretch of Thorndike Street from the Lowell Connector to the Gallagher Terminal is another phase of this project that will be underway soon – bids are already out with construction expected to begin early this spring. This phase, shown above, is mostly intended to keep outbound traffic from backing up into the new Lord Overpass intersection.

Other parts of this phase include a dedicated left turn lane onto Highland Street from Thorndike which will get vehicles waiting to make that turn out of the way of the outbound traffic on Thorndike Street, and vehicles coming from Highland Street will be able to turn both left and right onto Thorndike (they can only turn right now).

This is an extremely complex project. Its success is largely dependent on the ability to synchronize the traffic lights so that the mass of vehicles leaving the downtown and the Hamilton Canal District at the end of the workday don’t create gridlock at this new intersection. Last night it became clear to accomplish that goal, some trade-offs must be made.

The biggest of those trade-offs was the absence of dedicated, protected bike lanes. There will be a five-foot shoulder alongside the travel lanes that will be available for bicyclists, and the sidewalks will be extra wide and called “multi-use paths” to accommodate both pedestrians and bicyclists, but the bicycling proponents in attendance expressed their overall disappointment with the concept, explaining that mixing bikes and pedestrians create dangers for both and that the five-foot wide shoulder, while acceptable for hard-core bike riders who will ride in any conditions, will not provide the level of comfort and safety needed to get casual bikers on the road too.

City Planners responded that recent changes in Mass Dept of Transportation regulations about dedicated bike lanes make them extremely complex to construct and that injecting them into this already complex design would make the overall concept unfeasible. The planners did promise to revisit the details of how bikes are expected to traverse this new intersection and find ways to make it safer and more inviting.

Two other areas of concern briefly expressed were the overall width that pedestrians will have to cross – in some cases it will be up to six lanes of traffic. There will be “walk” lights that are timed to the pace of an elderly person walking across, but it is still a long distance. The other concern was about the likelihood that the design and its synchronized lights would be able to accommodate all of the traffic that is expected to be drawn to the Hamilton Canal District.

One thing that was very helpful, was a computer generated video clip that depicts the drive from downtown to the Gallagher Terminal on this new route. The video made it much easier to understand the coming changes, and gives you a boost of confidence that they will work as planned. Planners hope to make that video available on the city’s website in the coming days. I’ll be sure to link to it once it is available.

Overall, I was pleased with the information shared last night. Hopefully there will be room for some tweaks to make the design better for bikers and walkers, but to me, the city is moving in the right direction with this project.