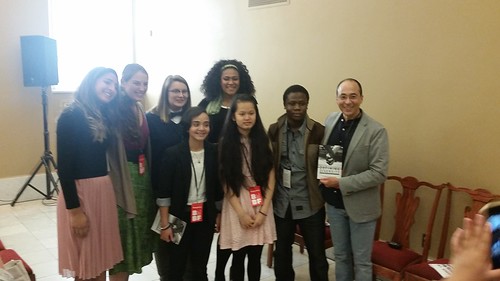 Among the nearly one hundred author sessions at yesterday’s Boston Book Festival was one called Defining Diversity which is also the title of a book published last May by a class of Lowell High students. Taking the stage at 11:30 am in the Boston Public Library’s Orientation Room were recent LHS graduates Carla Duran, Jackson Kokeh, Onotse Omoyeni, Sam Ramsden and Stephane Silva; current student Monineth Hang; and Jessica Lander who taught their Seminar on American Diversity. 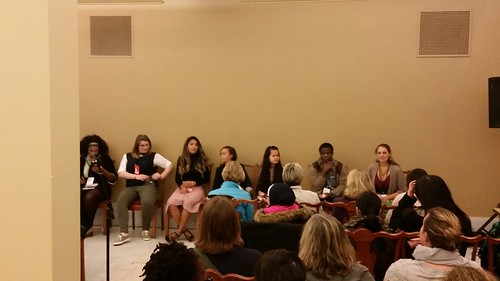 LHS contingent waiting for their session to begin

The hour-long session was moderated by Emmy Award-winning producer and director Teja Arboleda, who has also written several books about race and diversity. He did an excellent job of letting the students do the talking while guiding their remarks through the process of creating the book and on into areas of national importance. Along the way, much was said about the benefits of having gone to Lowell High School.

The six students, representing just one-quarter of the seminar’s 24 students, had the crowd of 80 riveted by their profound and insightful remarks. They explained that at the beginning of the course, the seminar featured students teaching students, but they quickly realized that to have meaningful discussions they needed a common understanding of some landmark federal statutes and Supreme Court decisions. Each student then took one or more topics, researched it and wrote about it. Those essays became the book.

As for how they selected the topics to write about, one student-author explained that he grew up in Liberia and come to the United States only four years ago. In Liberia, there was no racism; he only encountered it here in America. He said that Lowell High is a “really good school” and that “I really feel at home there.” But the past practice of separating school children by race in America perplexed him, so he choose to study and write about the US Supreme Court decision in Brown v Board of Education.

Another student said she had come from a country that only had one race, but here there are many races which was new to her. She started studying “unconscious bias” and quickly realized that she had her own unconscious biases which made her even more interested in and aware of the topic.

In response to a question about the biggest challenges of doing the book, students cited the never-ending editing process; the need for absolute accuracy since the book would be read by so many others; and the challenge to many of the immigrant-student-writers to use “the right language” when English was not their native language.

Some of the most exciting parts of the experience were: “With many of us being immigrants ourselves, realizing that we had a voice and that other people would hear that voice was a big thing.” And having a published book was also a big deal, especially for young people just about to graduate from high school (most are in college now; a few are still at LHS).

The session closed with a discussion about diversity. When asked if this book would be relevant to students in a school that lacked diversity, one of the LHS authors said it would for at least two reasons: One was that the book provides a common language that is needed for young people to discuss controversial issues in a respectful, informed way. “It will keep you from ‘othering’ the other person.” The other reason for the book’s relevance is that every group of people is diverse: they might all look the same but they have different experiences and personalities. One of the final student comments was “Diversity is innovation; it makes you think differently and makes you better at improving things.” 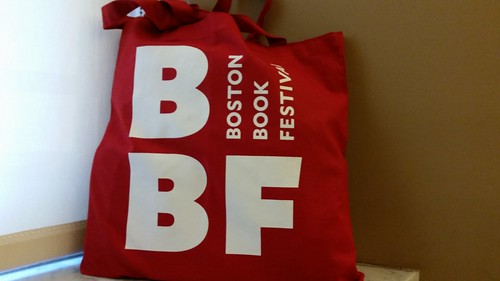 At a book festival that featured authors such as Geraldine Brooks, Ann Collette, Maureen Dowd, Adam Gopnik and Dennis Lehane, the kids from Kirk Street really stood out, and represented the city well. 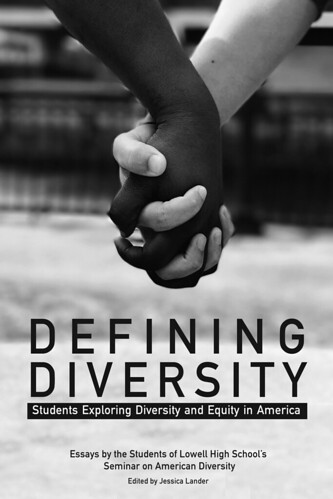 Defining Diversity has been shared with schools in all 50 states. It’s available online from Harvard Book Store.

The city election is just one week from this Tuesday. There has been a flurry of activity with candidate forums, political parties, sign-holding at major intersections and distribution of literature through the mail and by supporters roaming the neighborhoods. One thing all of those has in common is money. Looking at how much candidates have and how they spend it can provide some insight on what to expect in the closing days of the election.

During election season, candidates must file reports on money raised and spent every two weeks. The most recent report was due to OCPF on October 20. It covered the two week period from October 1 through October 15. For today, I’ve looked at that report and previous ones from 2017 for each council candidate. I’ve captured how much has been raised, how much has been spent up to October 15, and how much was left on hand as of October 15 (the last day of the most recent reporting period). Also listed is how the money has been spent so far. While I have not listed individual donor names, I have identified which candidates have taken contributions from Political Action Committees (PACs). The eighteen council candidates are listed in the order of finish in the preliminary election.

PAC contributions to Bill Samaras – none

PAC contributions to Vesna Nuon – none

PAC contributions to Jim Milinazzo: none

PAC contributions to Dave Conway: none

PAC contributions to Corey Belanger: none

No PAC contributions to Karen Cirillo

No PAC contributions to Matthew LeLacheur

No PAC contributions to Daniel Finn

No PAC contributions to Martin Hogan

No PAC contributions to Joe Boyle

The next two week report is due just before the election, so this will probably be the last info we’ll have on city council campaign finance until after the election which is Tuesday, November 7, 2017.

The City Council cancelled its meeting for this coming Tuesday night due to a light agenda (and it being Halloween).