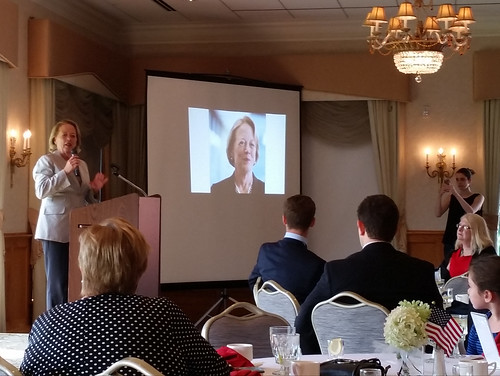 This past Sunday, September 10, 2017, the Andover Democratic Town Committee honored Congresswoman Niki Tsongas at a breakfast meeting at the Andover Country Club. The following is a summary of her remarks at the breakfast:

Niki Tsongas cited changed personal circumstances as contributing to her decision not to seek reelection, namely that all three of her daughters are now married and she has three grandchildren who she’d like to spend more time with. Regarding the early announcement of her decision, she said she wanted to be fair to the “many good candidates who are considering running.” She said this district has always sent good people to Congress, but reminded everyone that it was her late husband, Paul Tsongas, who turned the seat Democratic for the first time in 100 years.

Niki said that back in 2007 when Marty Meehan decided to leave Congress for the UMass Lowell Chancellorship, she decided to run “in a flash.” That decision was heavily influenced by a long family tradition of service to the country, especially her father, a career Air Force officer, and by Paul, who showed throughout his career what a difference one person in pubic office could make in the lives of so many.

That 2007 election was during the presidency of George W. Bush. It had been 25 years since Massachusetts had sent a woman to Congress. Niki said, “Women can’t win if women don’t run.” She did run and was fortunate to get the support needed to win. She said primaries are tough because you end up fighting with people who are your friends.

She reminded everyone that the Third is a “tough district” with 50 percent of the voters unenrolled, 35 percent Democrats and 15 percent Republican. She said whoever is nominated in 2018 will have a challenge, so we all will have to help.

Niki continued that after “living with the best role model anyone could have” in Paul, she knew that you can make a difference at every level. As an example, at an early hearing by the Armed Forces Committee on body armor, she asked if the military had body armor specifically designed for women who made up 13 percent of the US military. It did not. Women soldiers, sailors and Marines only had access to body armor designed for men who were larger and built differently. From that one question came a change in policy and equipment. One year later, body armor specifically designed for women was being sent to the field. She said that not all of the issues that arise are big ones, but she reminded the audience that anyone who holds federal office has enormous power.

Niki said that the next fifteen months won’t be “a long goodbye” because she has much left to do before leaving Congress. She closed by wishing all who will seek the seat the best of luck and promised to be there “to insure we send a Democrat to Congress.”