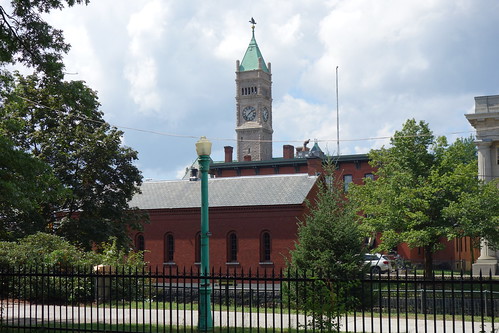 Maintenance of school and city boilers. City Manager Murphy says he has engaged the Collins Center at UMass Boston to do a study on options the city has for building maintenance, whether it involves combining school and city maintenance departments, outsourcing it, or some other option. The study will begin this fall and should be done by the end of 2017.

Lowell High School Repairs. Councilor Milinazzo asks about getting current inspection stickers. DPW Director Bellegarde says that the elevators have all been inspected and are up to date but the state has been slow in getting out the certificates. He says all the elevator inspections have been completed and are up to date. Councilor Leahy asks about repairing the gym roof. Manager Murphy says the 1922 building roof is costing $1.2mil to repair. That was the first priority since it would impact education. Once that’s done, the city will look at doing the field house roof. Councilor Leary says we should be pursuing the elevator certificates. Councilor Belanger says he is impressed with all the repairs that have been done, especially all that have been done by city workers. He says he understands why the 1922 building is being repaired first, but he says councilors get telephone calls complaining about cancelled athletic events at the field house so he’d like something to be done about that. Councilor Belanger asks about the elimination of the school department’s HVAC tech. Commissioner Bellegarde didn’t know that person, but says the people in his department were surprised at that move because that person was very effective in keeping the HVAC system working. On further questions, Commissioner Bellegarde says he understands other people have taken over those responsibilities. Councilor Belanger criticizes the school committee for eliminating positions from their budget regarding maintenance and pushing those costs onto the city. City Manager says that the plumber positions and three school resource officers still exist only they are being paid for the city not the school department. Councilor Rourke asks about removal of the contaminated soil. City Manager Murphy says he just signed the contract yesterday and it will be done before school begins. Councilor Mercier says the list contains a large list of “frightening” things at this building, that they have been corrected, but she is concerned about them. She asks for a copy of the elevator inspection certificates. Councilor Leahy says now that all the repairs have been done, how is this going to work in the future. Commissioner Bellegarde says the school department has an automated reporting system to DPW. He says it has been in place for some time and that it is a very effective program. Councilor Leahy says he hopes the school department and Lowell High have a better system in place for reporting these things because DPW can’t fix things if they don’t know about them. Mayor Kennedy points out that the responsibility for keeping the school maintained is the city’s and there’s a long list of things that are deferred by the city because there are more pressing issues that have to be repaired first. Councilor Leary says DPW is bare bones so you can’t expect things to get repaired if there aren’t enough people doing it. He says this is why there needs to be a restructuring of the way maintenance is being performed. Councilor Samaras says we should do a similar review of needed repairs for other city buildings like the police station and city hall. He says sometimes the council cuts the budget which prevents repairs from being done but then complain that the city manager is not getting the repairs done when it’s the result of council action. He says we should look at the big picture in a comprehensive way. Councilor Milinazzo asks why we don’t have a preventative maintenance program in place. He also asks if contracts with city workers allow the city to hire part time and temporary workers when needed. Manager Murphy says we have been more reactive than proactive, but that’s one of the things the Collins Center will be studying.

Parking Garage Rates – Citizen speaker says she was unaware until recently that there is a senior discount for those over 62 years old who have monthly parking passes. She wants to publicize that and also asks about getting a refund for past amounts paid. Council refers that question and the proposal to modify all of the fees to the finance subcommittee meeting.

Proposed Ordinance on Jet Skis. Three related motions are taken up at this time:

Councilor Milinazzo – Req. City Mgr. work with Law Department and the state delegation to draft legislation to require water craft to be insured with some form of compulsory insurance similar to automobiles.

Councilors seem supportive of ordinance banning jet skis on Merrimack River, are critical of those who use jet skis recklessly, however, the ordinance must be sent to a public hearing before councilors vote on it. That public hearing will be in two weeks. Some councilors also express concern about absence of city personnel patrolling the river and having buoys marking rocks, etc. It’s partly a question of resources but the tragedy and this proposed ordinance have created some momentum for doing something meaningful to protect public safety. Scheduled for a public hearing at the September 12, 2017 city council meeting.

Renewables Resolution – resolution by city council to promote use of recyclables, green energy, etc. Jay Mason, chair of the city’s Sustainability Council. Says he has already spoke in favor of this but wanted councilors to know he is present in case they have any questions. Council approves.

Report of Charter Review Subcommittee – Committee chair Leary reports on meeting held earlier this evening. Says they heard history of Plan E in Lowell from city solicitor and were briefed on the three methods of changing the charter. These include a charter commission, special acts by the council, and by initiative petition. Wants to have a public meeting in a larger facility early in the fall so the public can participate. Then foresees a third subcommittee meeting that would make recommendations to the full council.

Councilors Leary and Leahy – Req. City Mgr. provide a report with recommendations to resolve the ongoing complaints regarding incidents occurring at the corner of Central and Middle Streets (in front of the TD Bank North building). Councilor Mercier criticizes police for not covering all of downtown with walking patrol officers. Mayor Kennedy concurs with that.

Councilor Leary – Req. City Mgr. provide an update regarding illegal low riding cars throughout the City and police challenges regarding enforcement if applicable.

Councilor Milinazzo – Req. City Mgr. updated the City Council and the LHS Building Committee regarding the implications of the letter from Bond Counsel to the MSBA dated July 25, 2017 and when the City administration received the letter. Councilor Milinazzo says councilors received the letter and he has a number of questions about it, like when did the city administration receive it, when was it shared with the city council. He says it appears that the school committee would have a design veto over the new high school. Motion passes with no additional discussion.

Councilor Mercier – Req. City Mgr. have proper department install light on pole #20 on Fletcher Street, North Common side, or on pole #235 across the street by residential side at Willie Street.

Councilor Mercier – Req. City Mgr. increase the property tax revenue relief to non-profit veteran organizations from $400,000 to $700,000. Says this is to help the VFW on Plain Street which is building a new structure near its current location which is being sold to a private entity.

Councilor Samaras – Req. City Mgr. have LFD Chief review preliminary designs of the proposed new high school to ensure that it provides adequate public safety for the occupants of the building. Councilor Samaras is concerned by a comment by someone from Skanska that they kept the height of the five-story high school building proposed at Cawley Stadium eighteen inches below the height needed for “high rise safety measures.” Councilor Samaras says safety measures aren’t an area where we should be trying to save money and requests a report.