The late Paul Sullivan (of WBZ, WLLH, and Lowell Sun fame) used to say that between Independence Day and Labor Day, candidates for city office should go to Hampton Beach because in the summer, there are more Lowell voters there than there were in the city. I’m not sure if that is literally true, but it makes the point that during the summer, the average voter is not paying close attention to local politics.

But these days, school begins a week before Labor Day and so will a surge of political activity. We got a burst of that Friday with the news the Jim Milinazzo, the incumbent councilor and former mayor who had previously said he would not seek reelection, took out nomination papers for the upcoming council election on the last day they were available. If Councilor Milinazzo turns in the nomination papers, all nine incumbent councilors will be running for reelection.

The field of candidates for both the council and the school committee will become clearer at 5 pm on Tuesday, which is the deadline for submitting nominations papers. According to yesterday’s Lowell Sun story on Milinazzo’s decision to run, 21 candidates for council have already returned their nominations papers. Four others, including Milinazzo, have taken papers out but have yet to return them. To qualify for the ballot, nomination papers containing the signatures of 50 registered voters must be turned in to the Lowell Election Office by 5 pm on Tuesday.

The last Lowell preliminary election was held on October 6, 2015, with 3952 people voting (a turnout of 6.7 percent). Here are the results of that election:

There was no preliminary election for the school committee, so here are the November results:

As I wrote last Sunday, the “you’re either with us, or against us” nature of the debate over the site of a new Lowell High School (at Cawley Stadium or remain downtown), squeezed out any real discussion of the financial impact the cost of a new high school will have on individual tax payers. While it’s possible that people may remain silent about that until the increase actually appears in quarterly tax bills, it is also possible that a “silent majority” of tax payers may make it an issue in the coming election.

How that discontent would show up on Election Day is unclear, because none of the council challengers to date has made the overall affordability of a new high school a campaign issue. Despite the absence of a clear “no tax increase” alternative, voters could always express their displeasure by voting for change, which could create a pro-challenger, anti-incumbent dynamic.

In conversations with a couple of candidates earlier in the summer, I said that from a purely political standpoint, taking a strong position on either the downtown or Cawley sites is tricky, because, as I see it, one-fourth of the electorate is solidly for Cawley; one-fourth is solidly for downtown; and one-half is solidly for “I don’t want my taxes to go up.” So by coming out strongly for one or the other high school option, a candidate risks alienating three-fourths of the electorate (the one-quarter who favor the other option plus the one-half who don’t want a tax increase).

For instance, last week, Councilors Mercier and Elliott had a motion to investigate structuring the tax increase for the new high school in a way that would minimize the amount of the increase to be paid by property owners who are elderly or on fixed income. While that motion passed unanimously, it sparked some heated rhetoric among councilors including an accusation by Councilor Milinazzo that the makers of the motion, both of whom had voted for the Cawley option, were merely “pandering to voters.”

The agenda for this week’s council meeting has at least two high school-related motions. Mayor Kennedy is requesting that the city hire “an independent third party auditor, with appropriate credentials, to provide the city council with reliable cost estimates for the construction of the new high school and all ancillary costs associated with the high school project.” And Councilor Elliott has a motion for a report “on the process of bidding of school bus contract” and “on initiating busing of Lowell High students this year/next year.” (LHS students currently pay for their own LRTA bus passes, but councilors who voted for Cawley did so with the intent that the city would assume the cost of bussing high school students at the time of the move if not sooner, making bussing one of the “ancillary costs” of the new high school cited in Mayor Kennedy’s motion).

As much as the candidates may hope that voters shift their attention to issues other than the high school, I don’t think that will be the case. Advocates for both sites, Cawley and downtown, have active political action groups that intend to support candidates who favor one option or the other. In addition to that, the pro-downtown group seems to be hard at work collecting the signatures needed to get a referendum question asking whether the high school should stay downtown on the November ballot.

Lurking in the background of all this is the voting rights lawsuit that’s been filed against the city alleging that the all at-large method of electing councilors violates the federal voting rights act. While that suit is not specifically about the high school siting decision, it’s not a stretch to see the decision to move the high school from downtown to Cawley Stadium as relevant evidence in the litigation of that suit.

Considering all of these factors, it is quite likely that the high school decision will be the predominant factor in the council election. But how that issue will affect the outcome is still anyone’s guess. 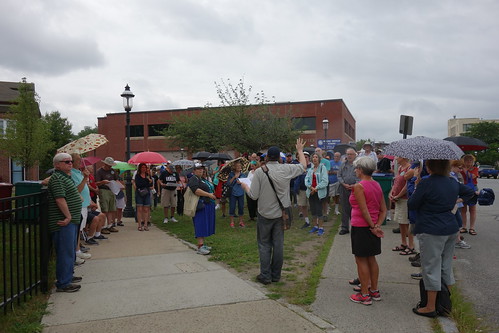 Thanks to yesterday’s tour leaders, Chris Hayes and Aurora Erickson (with a cameo appearance by Dave Turcotte of UMass Lowell). Thanks also to the 90 hardy individuals who showed up for the 10 am tour. We were about 30 minutes into it, at the corner of Broadway and Dummer, when the rain’s intensity really picked up. That caused us to retreat to the overhead cover outside the National Park Visitor Center, where Chris, Aurora and Dave completed their remarks as the rain plunged down onto nearby Market Street. 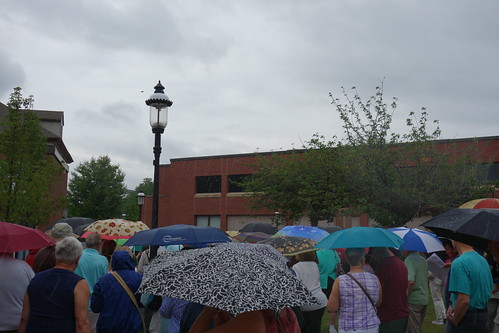 To understand Lowell’s history over the past half century, you have to understand urban renewal. It’s a complex topic with dozens of elements like the Lowell Connector, Central Plaza, Father Morissette Boulevard, and other places familiar to us today, that all seem separate but which are in fact pieces of the same urban renewal puzzle. Chris and Aurora did a masterful job in helping us see how many of those puzzle pieces fit together.

Next Saturday’s Lowell Walk will in a way be the next chapter of the urban renewal story. The topic is the Hamilton Canal District and the tour will be led by Claire Ricker of the city’s Division of Planning and Development. Besides updating us on Hamilton Canal developments, Claire will also discuss plans for the remake of the Lord Overpass, the coming changes to Thorndike Street, and the work being done on the South Common.

The Hamilton Canal Walk is on Saturday, August 12, 2017, at 10 am from Lowell National Park Visitor Center. It is free and open to everyone. 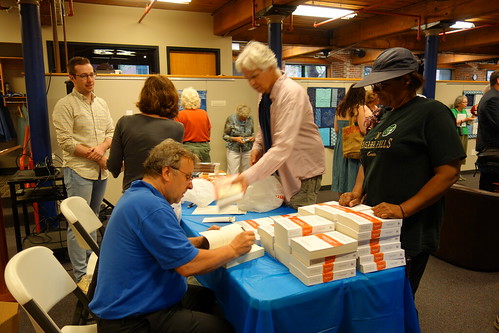 Paul Marion signing a copy of History as It Happens.

History as It Happens Book Launch

History as It Happens: Citizen Bloggers in Lowell, Mass., the new book edited by Paul Marion and me that compiles the best writing and photos from this website for the past ten years, had its official launch yesterday at Lowell Telecommunications Corporation. The book may be purchased online from the Loom Press website, and we will make readers aware of upcoming book selling events as they are scheduled. Thanks to all who attended yesterday’s event.