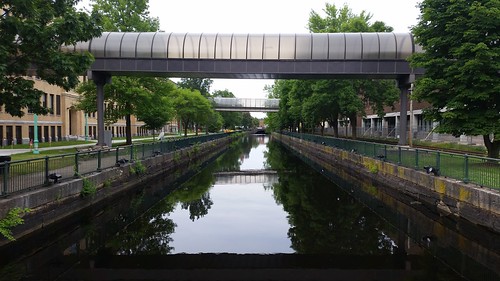 Merrimack Canal with Lowell High buildings on both banks

The road to the yellow brick condominiums on Kirk Street hit a few bumps at last week’s council meeting. For months we’ve heard about the upscale residences and their wealthy occupants that will occupy the current Lowell High buildings once the students and staff are gone. But on Tuesday, at least three councilors shared a very different vision for the reuse of those buildings.

The matter arose when the council voted to authorize the school department to execute a three year lease for space in the Bon Marche building for the school department’s administrative offices with a yearly rent of $400,000. Although all councilors voted in favor of the lease, at least three of them—who a week earlier didn’t hesitate to commit $150 million in city funds for a new high school–turned squeamish about encumbering $400,000 per year for rent. All three justified their yes vote by pointing out that the lease would not have to be renewed since the school department headquarters would likely move into the rent-free space being vacated by the high school when it moves out of downtown. The vision of upscale condominiums had faded away.

I’ve written that one reason the new high school selection process has revealed such a bitter divide in the city is because we lack a shared vision of how the city should proceed into the future. But it’s tough for a city to have a unified vision when city councilors seem to change their vision on a week-to-week basis, depending on what agenda item is before them at the time.

However, the “former high school as school department headquarters” concept does raise an important question. Who decides how the current high school is to be used once the new high school opens on Clark Road? There was much debate earlier this week about whether it was the city council or the school committee that has the authority to decide where a new school is to be built. That seems to be an entirely different issue than who decides when the school department no longer needs a building that’s been used throughout its existence as a school. My guess is that decision is one for the school committee. If that’s the case, how likely is it for the school committee to turn over any of the current high school buildings for private redevelopment when those buildings might efficiently serve the school department for years to come as has been the case with the Molloy, Laura Lee, Leblanc, Riverside, and probably many more former school buildings that were no longer needed for traditional classroom learning? With the school committee having voted 5 to 1 to keep the high school downtown, I assume they might have some school-related ideas on how the downtown buildings should be used once the high school as we know it moves out. And upscale residential condominiums might not fit that picture.

On a positive note, several major developments in the city seem to be progressing on schedule. Earlier this week I walked around downtown and checked out some of the most important projects. Here’s what I found: 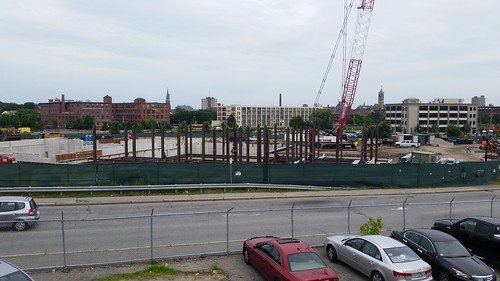 Lowell Justice CenterLowell Justice Center. The foundation is complete and steel is rising. Scheduled to open in 2020, the 7-story exterior shell is supposed to be up by the end of this year. Its progress adds an encouraging note to the Hamilton Canal story. A challenge I’ve mentioned before will come when this building does open. That will cause three major downtown buildings now filled with courts – District Court on Hurd Street, Juvenile Court on Appleton Street, and Superior Court on Gorham Street – to all become vacant as their occupants move into the new structure. What will fill those three buildings once the judicial center opens? 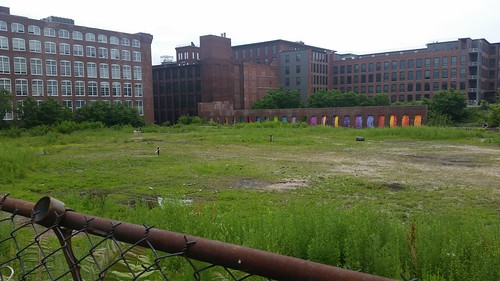 Hamilton Canal Parking Garage. Design work will be finished next spring and the city hopes to open this 800-space garage in 2019. It’s to be tucked into the corner of the Hamilton Canal District, closer to Market Street than to the Lord Overpass, in the green space just to the front of the red brick Canal Place 3 (I originally had ID’d that as Market Mills – thanks to the reader who corrected that) residences shown in the photo above. 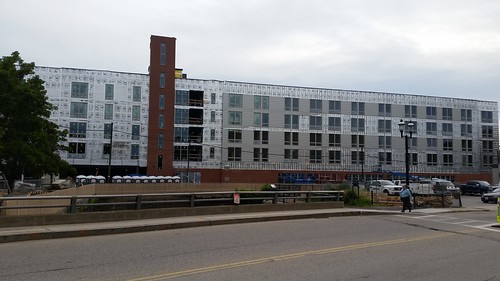 Edge Merrimack River is the private dormitory rapidly arising on French Street on the former Lowell Five Cent Savings operations center site. Although unaffiliated with UMass Lowell, the target audience for this facility is UMass Lowell and other higher ed students. The property owners and the University have a rocky relationship, as an April 2017 article on the UMass Lowell Connector website described it.

This project is kind of a roll of the dice for the city. If it succeeds in filling itself with rent-paying students, it could provide a boost by bringing more college-aged young people to downtown. But if it fails to attract enough student renters, who will the building owners turn to for tenants? Rents are extremely high in Lowell so there should be no shortage of people looking for quarters. It just might not be college students. 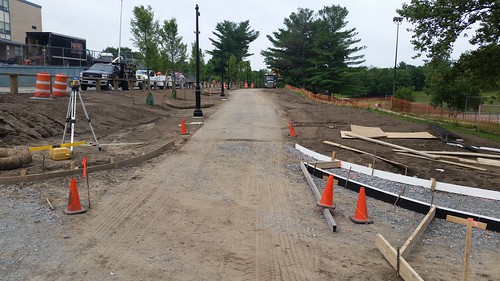 South Common improvements. Installation of the lighted pathway across the South Common connecting Thorndike and South Streets is proceeding at a good pace. Once complete, this walkway should make it easier for residents of the Back Central neighborhood who ride the train to Boston to have a more direct walking route from their homes to the Gallagher Terminal and back. 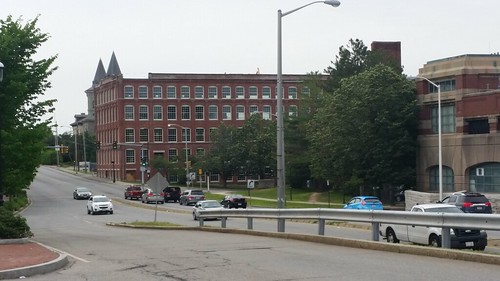 Thorndike Exchange. This mixed use development on Thorndike Street could be the most important project of all of these. Much of the outside work appears to be completed and the development’s website says some units will be available for occupancy just two months from now.

Here’s how the development describes itself on its website:

Thorndike Exchange is the perfect blend of historic preservation and modernization. The former home of Thorndike Factory Outlet and Comfort Furniture, Thorndike Exchange is a transformation of old mill space into a thriving mixed-use community. Featuring the latest in commercial space, a mix of modern dining options plus a brand new multi-story residential tower, Thorndike Exchange embraces a vibrant live-work-play environment. Conveniently located just minutes from major interstates and adjacent to the Gallagher Transit Terminal, our premium transit-oriented development allows you direct access to the Boston perimeter commercial and retail markets.

I say that Thorndike Exchange might be the most important project of all because it embraces so many of the elements central to the resurgence of cities in America today – mixed use development with residential, retail and commercial in close proximity. A funky historic building in a historic setting (as opposed to a sanitary cookie-cutter tower with nothing around but a highway on ramp). And Thorndike Exchange has close proximity to and embraces public transportation in the form of the adjacent Gallagher Transportation Terminal.

With the Hamilton Canal District just 200 yards down the road, Thorndike Exchange can serve as a template for what that larger space should become. And it is pulling all of those pieces together – housing, restaurants, cultural amenities, walking and biking trails, public transportation – that attracts the types of companies we all desire to locate in the Hamilton Canal District. Those are the things that drew General Electric, Red Hat software, and now Amazon, to the Fort Point section of Boston. As those top-tier companies migrate to that quirky, South Boston neighborhood, leaner high tech businesses and start-ups will be priced out and will seek out more affordable quarters with the same amenities elsewhere.