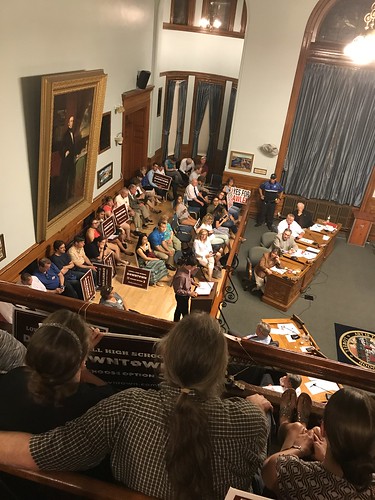 Observations on the Lowell High Debate

Dick Howe expressed the view that Lowell’s social and economic life lies in the values of being a city and not trying to be a suburban wannabe. The city versus the suburbs was a frequent debate point in last evening’s debate, which witnessed about six hours of public testimony – some quite pointed.  Other contrasts were expressed between diverse students and the more vanilla Cawley crowd. 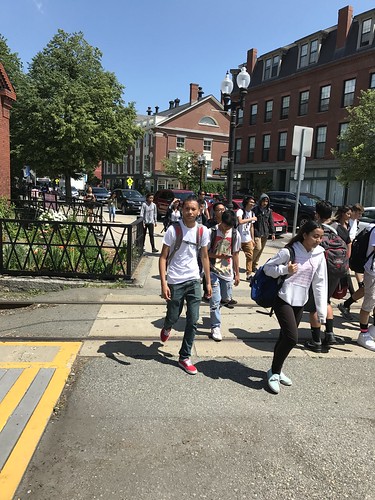 On Monday, I happened to be downtown when the high school let out.  As demonstrated by the picture here, the faces were diverse. As described during the discussion, Lowell High is a majority minority school, and this absolutely needs to be understood.  Students were walking home, to the library, grabbing a bite at the sub shop – or just being social.  This was and is Lowell – a city of immigrants.  I do not believe that the Cawley supporters truly understand what this means or appreciate the challenges of immigrant families and stressors.  A building owner that I was with commented that in the 20 years she’d had a nearby business, she had never witnessed an act of vandalism or a problem with loitering or petty crime.

The school advisory panel this morning deadlocked 9-9 on a recommendation, however, a majority of the educators supported the downtown location.  You can also add Congresswoman Tsongas, State Senator Donoghue, and Chancellor Meehan as supporters of the downtown option.  These are very informed individuals and groups whose counsel in this process would have been useful.  On the other hand, the support for Cawley was all about being new and how we would work out problems like bussing, transportation costs, street widenings and a site lacking infrastructure.

Illustrating these conflicts and decision making in general was well illustrated by Councilor Elliot’s comment that when he thought about what was best for his kids and relatives, Cawley was the better choice.  The lost point with the Councilor and many of the Cawley supporters is that everyone in Lowell does not look like Rodney’s kids and immediate family.  This opinion was, in fact, expressed by no less than a dozen student speakers who pledged to become more politically active and hold councilors responsible for their anti-downtown sentiment.  The students lamented the nature of being removed from the downtown and their support institutions.  Some described the feeling that they were being exiled to Tewksbury and an area that simply didn’t offer a support system.  There is resonance here as to the federal discrimination suit against Lowell, which seeks more of a district representation system.  You cannot help to wonder, what would be the tenor and outcome of the high school debate with several “minority” office holders taking part in the debate.

For downtown supporters, this debate has been depressing.  Over decades I have argued for the values of an active and inclusive downtown, thematically and economically.  I somehow thought we would outlive the supporters of suburban values and belittlers of the downtown.  But it is the lack of appreciation for what the high school could contribute to the downtown – with proper and imaginative plans – and the loss of that opportunity for future generations, this is what is most unfortunate.  I had the privilege of working Pat Mogan.  I understand the meaning and value of an “educative city.”

Other concerns experienced in this debate involve the initial lack of public participation and the tinges of racism and classism that have surfaced.  Disparaging comments have been made about ‘those kids that are on food stamps’ and ‘how can they contribute economically to the downtown?’  And then there is the “magical thinking,” as one speaker called it, in describing with confidence that the 600,000 square foot high school buildings could soon be inhabited by Faneuil Hall type retail and half million dollar condos.

I am glad I attended this marathon session.  Certainly, not because of the immediate outcome.  In fact, I remain a strong supporter of the wisdom of developing a state-of-the-art downtown high school.  But I was heartened by the level of student participation, the truth telling, and support for the values of urban life and its fortuitous adjacencies.  Generationally, Lowell will be aided by values now seen in urban life, social equality, walkability and life-long education.  Lowell’s next generation checked in tonight.  In more ways than one, Lowell may never be the same.

8 Responses to Observations on the Lowell High Debate