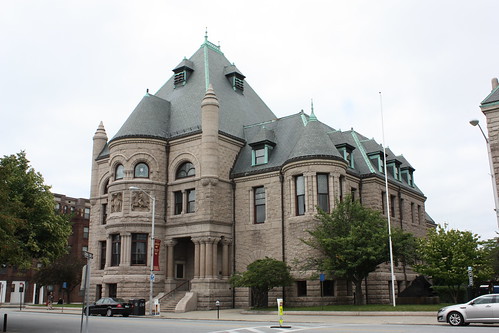 Tonight from 6 to 8 pm at the Pollard Memorial Library is the Local Author Book Fair. I will be there with all three of my books for sale, including Lowell Municipal Elections: 1965-2015. 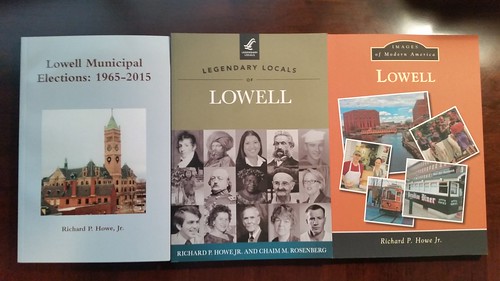 The following is from the Library’s press release about the event:

Dave Agans, corrupted by Mad Magazine and Get Smart at an early age, began writing spy spoofs in the sixth grade. He has since written the musical comedy Hot Buttons, dozens of comic stage monologues, the popular, humorous technical book Debugging, and the conspiracy satire The Urban Legion. Dave can be recognized on New Hampshire golf courses by his flawed swing and on the roads by his AMUSED license plate.

Rick Conti has written a dozen screenplays, a handful of short stories, nine years of blog posts, and a hundred or so sketches, short films, and short plays, many of which he acted in. He has written two novels based on his screenplays: A Song in the Storm and A Slippery Land, both available at the Bookfair. Rick lives in Chelmsford. More his writing can be found at his blog: http://www.rickconti.me.

JF Dacey was born in Lowell in 1944 and is a lifelong resident.  His book, Take the Long Way Home, is a true-life chronicle of his experiences as an all-night taxicab driver in Lowell during 1979, and is available on amazon.com.  He is a published playwright whose scripts have been read and performed at various venues in and around downtown Lowell.  For many years, he has been a contributor of outspoken opinions to the Letters to the Editor page of The Lowell Sun.

Laura Fedolfi mixes Greek gods with everyday life in her series, Revealing Hannah. Books 1 & 2 are available with Book 3 to come in the fall. Hannah Summers finds her careful world unraveling as she learns that a graduation gift from the gods is both a blessing and a curse…
When Laura isn’t immersed in the crazy world of Greek gods, she works with Habitat for Humanity and is a founding member of the Society of Independent Publishers and Authors (SIPA.) She’s on social media at Facebook.com/RevealingHannah, Twitter @LauraFedolfi or www.revealinghannah.com and loves hearing from readers.

Michael Hartigan Award-winning author Michael Hartigan has explored and written about unique people, places and traditions around the world. His novel, Stone Angels, was awarded the 2015 Outstanding Writer Award. This gritty, fast-paced thriller drops readers into the mind of a young killer at war with a guilty conscience. Hartigan’s fiction work is also featured in the anthology, Shoreline, published in 2016. Hartigan is an accomplished travel writer, featured in USA Today, Arizona Republic, Northshore Magazine, Destinations Travel Magazine and more. He lives in Stoneham, MA and can be contacted at www.stoneangelsbook.com or Twitter @StoneAngelsBook.

Richard Hollman received his Ph.D. in Physics from Stanford University in 1983, and has worked in the electronics industry ever since. He began writing fiction quite recently, inspired by the fascinating history of Lowell, Massachusetts. This fascination has resulted in the science fiction trilogy A Lowell Story, comprised of the novels Release (Liberação), Survival (Sobrevivência), and Purpose (Propôsito) (available in both paperback and digital editions.  Richard also recently released Tagz, a collection of short stories.  A new science fiction novel Virus is in progress, for release in 2018. For more information, and news about upcoming releases, visit:   http://www.alowellstory.com

Richard Howe Jr. is the author of the recently published Lowell Municipal Elections: 1965-2015, which contains fifty years of city council, school committee, and regional school committee election results, along with stories of the selection of all city managers, mayors, and school superintendents during that period. He is also the author of Lowell: Images of Modern America and the co-author of Legendary Locals of Lowell, two photographic histories of Lowell. Howe is the founder of Lowell Walks and the creator of the richardhowe.com blog.

Paul Marion is the author of the new “Union River: Poems and Sketches,” a lyrical Americana address, as well as “Mill Power: The Origin and Impact of Lowell National Historical Park” (2014). He is the editor of Jack Kerouac’s early writings, “Atop an Underwood” (Viking/Penguin), which has been translated into Italian and French. He lives in Lowell.

Sara Marks is an author, knitter, Wikipedian, and librarian from Massachusetts. After over 10 years of participating in National Novel Writing Month, she is releasing her first novel, Modern Persuasion, with Illuminated Myth Publishing. When she isn’t writing, she is an academic librarian at University of Massachusetts Lowell.

Mill Pages is a local writing group made up of authors from the Merrimack Valley who participate in November’s National Novel Writing Month.  When they aren’t writing their novels, they work to produce an anthology magazine of their shorter works including short stories, poetry, and art work.  In the Fall of 2015 they released volume 1.  They are almost done with volume 2, which will be available this summer via Amazon in paper and ebook.

Steve O’Connor is a native of Lowell, Massachusetts, where much of his writing is set. He is the author of Smokestack Lightning, a collection of short stories, and two novels. The first, The Spy in the City of Books is historical fiction set in Lowell, and in WWII France, and is based in part on interviews with a former OSS operative who served in Occupied France. The second, The Witch at Rivermouth, has been described as “a cerebral mystery.” Pulitzer Prize-winning author Lucinda Franks called it, “rich, eerie, and intriguing.”

Jim Peters is the author of a book about the Lowell Motorboat Club “Lowell’s Best Kept Secret.”  The book is a history of motorboating on the Merrimack River.  It includes the trip of the first steamship on the river, the Merrimack, which went to Concord, NH and took on passengers for a trip further up the swollen river.  Over two hundred people got on barges which followed the steamship further upriver.  The book is a celebration of Lowell’s boating history with many interesting stories and pictures.  It shows the power of the falls in floods.

Dale T. Phillips has published 6 novels, over 60 short stories, 9 books of story collections, poetry, and non-fiction. He took writing seminars from Stephen King in college, has appeared on stage, television, and in an independent feature film, and competed on Jeopardy. He also co-wrote The Nine, a short political satire film. He’s traveled to all 50 states, Mexico, Canada, and through Europe.

Jean Trounstine is an activist, author, and professor at Middlesex Community College in Lowell, whose latest book is Boy With A Knife: A Story of Murder, Remorse, and a Prisoner’s Fight for Justice (IG Publishing 2016). It explores the true story of Karter Kane Reed and the injustice of sentencing juveniles to adult prisons. Trounstine worked at Framingham Women’s Prison for ten years where she directed eight plays with prisoners. Her highly-praised book about that work, Shakespeare Behind Bars: The Power of Drama in a Women’s Prison has been featured on NPR, The Connection, Here and Now, and in numerous print publications here and abroad.

Ursula Wong writes about strong women who struggle against impossible odds to achieve their dreams. Look for her award-winning debut novel, Purple Trees, and her WW II thriller, Amber Wolf, at fine online retailers and on her website at http://ursulawong.wordpress.com. She will also have for sale at the book fair Insanity Tales & Insanity Tales II