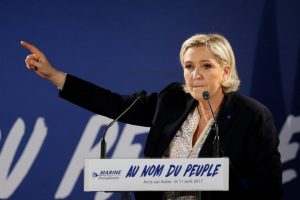 These complaints are not going away, and in the U.S. the Democratic Party must address the grievances of those who are being run over by economic and social changes driven by powerful interests.

From today’s paper, here’s a NY Times opinion piece by a writer in France.

Why Marine Le Pen is popular in France.

And here’s another NY Times guest column from today with a broader view of the French political situation and what’s at stake there in the election this weekend.

One Response to Why the Harsh Parties Are Competitive in France, U.K., & U.S.