Last September, UMass Lowell named historian Robert Forrant a Distinguished University Professor, the highest distinction bestowed upon a UMass Lowell faculty member. Forrant, a member of the Department of History, received this honor for his outstanding contributions to teaching, research, and service to UMass Lowell, including the development of public history programs in Lowell and Lawrence. As part of his appointment, Forrant delivered the annual Distinguished University Professor lecture yesterday to a crowd of more than 200 at the UMass Lowell Inn & Conference Center, including UMass President Marty Meehan, UMass Lowell Chancellor Jacquie Moloney, and more than a dozen of Forrant’s former students. Here are my observations from Bob’s lecture, supplemented by the text of his address which he generously shared: 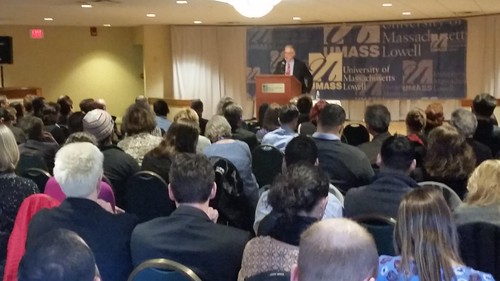 The topic of Bob’s lecture was the Role of the Public University in the 21st Century. He began by thanking a number of people including former chancellor Bill Hogan for hiring him, the committee that selected him, and three of his own teachers. The first was Mr. Casale, a high school history teacher who convinced Bob that he should go to college, the first in his family to do so. The second was Raymond Robinson, the chair of the history department at Northeastern University who got Bob interested in the field. The third was Bruce Lorrey, Bob’s dissertation advisor at UMass Amherst. Deep into the research for and writing of his dissertation, Bob’s apartment burned, destroying the sole copy of all of his research. That’s what prompted Bob to go to work for American Bosch as a machinist – he needed a job. But when he was laid off by Bosch, Professor Lorrey reeled him back in to the history department, Bob finished the dissertation and earned his doctorate. Bob also thanked his parents for always having books in the house, something that was critical to his early education.

Bob then began his remarks about the role of the public university in modern America. In a mere 22 minutes, he packed in a number of big, important ideas.

He began by attacking the prevailing wisdom that the new normal in public higher education is reduced budgets, higher tuition, and more student debt. He quoted Marty Meehan as saying that in 1978 when he himself was a student at ULowell, he could work nights, weekends, and a summer job and earn enough money to pay a year’s tuition. Huge tuition increases since then make such a scenario a fantasy. Today, the cost of that education has shifted from the Commonwealth to students and their families.

Yet even though all in higher education are asked to do more with less, their contribution to the Commonwealth grows and grows. According to the UMass Donahue Institute, the state’s $621 million investment in the UMass system in FY2015 yielded $6.2 billion in economic activity. For UMass Lowell alone, the state’s $97 million contribution yielded a $922 million return.

Bob warned that as tuition at the state’s private universities continues to rise, the high school students with relatively affluent parents who would normally choose private colleges are instead heading to the UMass system, squeezing out young immigrants and the sons and daughters of blue collar workers who would be the first in their families to attend college.

So where to for the public university; where to for UMass Lowell, the campus that I consider the real flagship for the UMass system? After all, we are located where the action is, in a city and region faced with the myriad social and economic problems that the nation wrestles with. Lowell also has the legacy, ingredients, and potential that makes it a formidable urban laboratory. UMass Lowell – we’re as real as it gets – ought to be one of our marketing slogans!

Lowell’s always been a place for people to come together and make a life and a living, starting with native tribes fishing at the falls, followed by Yankee farmers and traders who occupied the land, and the subsequent ambitious immigrants, merchants, and workers, who poured into this place. Lowell and Massachusetts are places in motion over time and this University’s been a part of that motion since the early 1890s. The question before us is whether we make changes for the better, whether we will be catalytic, or instead wait for change to roll over us.

Bob, the history professor, reached back to the Morrill Land Grant Act of 1862 and the GI Bill of 1944 as great precedents in the history of public higher education in America. In both cases, public funds were used to make higher education accessible to those who would otherwise be deprived of it, and the payback for our economy, or society, and our country, was monumental. 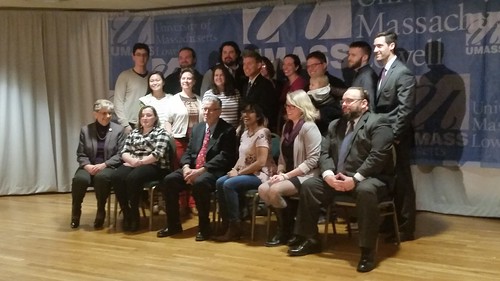 After the lecture, Bob posed for a photo with his former students. This seemed to be the high point of the evening for him.

And Lowell, with its incredible history, but also with its full roster of modern societal problems, is the perfect place for a public university to embrace a public mission and to thrive. However, a threat to that mission comes from within the university, from the prevailing yardsticks for gaining tenure by faculty members. Much of the things that Bob does today that have the greatest impact on the communities of Lowell and Lawrence don’t involve publishing books and obtaining big grants – the two main criteria for winning tenure. So why would a young faculty member plunge into the type of community advocacy that would best serve the host community when such an approach would amount to career suicide.

Next, Bob illustrated how history can inform our response to current events. He spoke of the more aggressive approach to immigration enforcement that arrived with our new president and how much that has disrupted the lives of so many, including quite a few UMass Lowell students. Today’s movements for sanctuary campuses and sanctuary cities find favorable precedents here in Lowell from the community’s response to the Fugitive Slave Act in the 1850s (there was much protest and civil disobedience). Bob cited similar parallels to the Civil Rights movement of the early 1960s.

Declaring that “history matters, as does the research required to uncover it and make it public,” Bob closed his remarks by advocating the creation of an Innovation Hub at UMass Lowell for the Fine Arts, Humanities, and Social Sciences. This would be a place where faculty and students from those disciplines could come together, collaborate, interact with the public, and attack the “big problems” of society such as access to education, job creation, income inequality, and many others.

Bob closed his lecture by saying, “And, lastly we must refuse to let the cynical hand of the market model of higher education warp this great place by the river. We do well; we can do better. Our students deserve this and so much more.“ 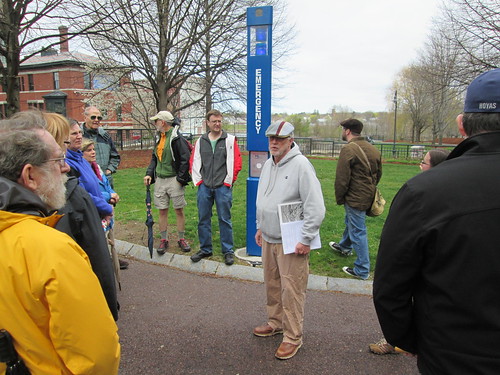