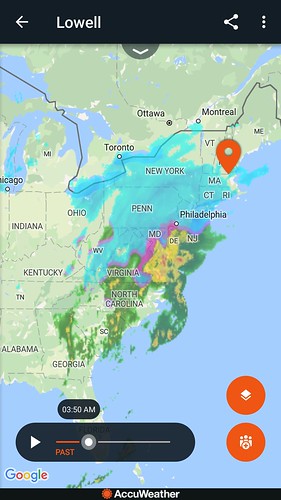 A look out the window at 6 am revealed a thin white coating of snow on the cars and driveway, but the yard’s patches of dormant grass were fully visible. Only the bare patches were white. The snow had only just begun.

Wakeup came later than usual on a weekday since most things were cancelled by last night. Notice of the city’s parking ban (effective 6 a.m. today) came in at 4:20 yesterday afternoon. The No School robocall arrived an hour later. An email update from the City Clerk’s office at about the same time said tonight’s city council meeting had been cancelled. And at 7 p.m., the state announced that all courts in Massachusetts will be closed for today. No need to set the alarm.

At 6:45 a.m., meteorologist Matt Noyes on NECN reports that the superfine snow that’s steadily falling outside my window right now will soon taper off as a gap in the precipitation passes through. The heavy stuff will begin falling later this morning and then it will continue into the early evening. Noyes did say that the warm weather line has crept further northwest than was expected, but that will mostly benefit Boston and points south with a lower snow totals than had been previously forecast. The Merrimack Valley is still in line for 18 to 24 inches of snow, an “epic” storm, according to Noyes. Winds which are calm now will become very intense when the snow fall is heaviest.

I’ll be back with updates through the day and invite readers and co-bloggers to contribute their observations and experiences throughout the storm.

That was a tough storm!

Light snow continued through lunch time. I went out at 11:30 am to clear the cars and driveway in an attempt to keep ahead of the storm. There was only about 2 inches by then and it was easy to clear.

Shortly after noon, however, visibility dropped, winds increased, and the snow became very heavy. That persisted for several hours with Twitter and Facebook reporting frequent power outages. Our lights flickered a few times and went out once, but just for a few seconds. The high wind and heavy snow dissuaded me from heading back outside. So much for my incremental snow-clearing strategy.

Finally, at 4:30 pm, the snow seemed to change to sleet. The temperature had risen from the mid-20s to 32 degrees. I suited up and started the snow blower. Ten more inches of snow, at least, had fallen and it was the consistency of wet cement. The snow blower struggled (as did I), but finally the driveway was clear enough. The wind howled continuously, knocking small branches to the ground all over the yard.

At 7 pm, I ventured out again, this time with a shovel, and cleared some of the snow that I’d missed earlier. It was still above freezing, and only a coating of slushy snow had fallen. The wind had diminished.

A call came in cancelling school in Lowell for today, and all courthouse in Massachusetts had a delayed opening until 10 am. Both were wise decisions, for the temperature had dropped to 15 degrees and everything had frozen solid. Anything that wasn’t cleared yesterday will be tough to remove today. I’m about to find that out since the city plow passed by sometime during the night and deposited a small pile of snow-rubble at the end of my driveway. I’ll need a solid-steel summer shovel for this job; my regular snow shovel isn’t up to this job.