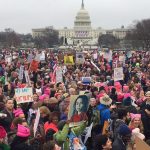 Over the weekend, we saw two competing visions of America in the form of citizens standing (and marching) for what they believe is best for the country, all of it in public view on the National Mall in Washington, D.C. I wrote this poem after a visit with my family in summer of 2004.—PM

What’s the Lincoln shorthand? Freed the slaves; saved the union.

When he sees my wife lining up a shot, a guy in a straw cowboy hat

At late day reflecting sun on its narrow western face,

Marking a stop in work and return, a monument telling its story,

One in which protesters rolled cut stones into the drink,