Sue Kim is a Professor of English and the Co-Director of the Center for Asian American Studies at UMass Lowell. She was the opening speaker at this past Saturday’s “Community Conversation” on the 2016 election at the Pollard Memorial Library. In her remarks, she discussed the term “the white working class,” how it was used in this past election, and placed it in a historical context. At my request, she shared her remarks for posting here. 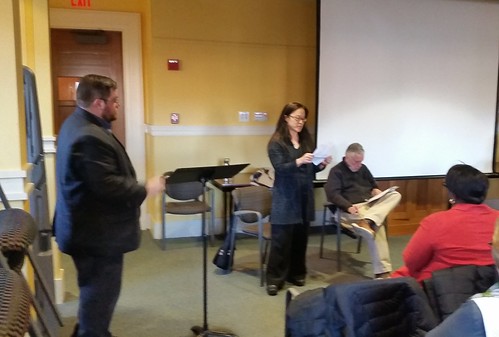 In the wake of the 2016 presidential election, mainstream politicians and media outlets seem to have discovered the working class. We hear a lot about the “the white working class” and its populist revolt. At the same time, on both the left and the right, we told that we have to leave behind “identity politics” and diversity, which are distracting us from the real issues.

This is a dangerous trend. Setting up the dialogue as “white working class” vs. “diversity,” or class vs. race, is a way to divide and conquer, and it’s fundamentally wrong and dangerous.

First, this false binary ignores the actual histories of how race and class have always been intertwined and interdependent, at least since the beginnings of capitalism. Examine the origins of colonialism with the Dutch East India Company or the British Royal Niger Company, or read the work of Manning Marable and Angela Davis. Study the history of most Asian groups in the US — our various histories almost always result from a combination of commerce/labor needs, colonialism, and/or the Cold War. Lowell itself is a living monument to the ways in which industry, ethnicity, race, class, gender, religion, and politics have always been intertwined. None of these are “new” issues — they are literally woven into the fabric of American society. It’s only the open discussion of these things that are relatively new.

What appears in public discourse is usually an extremely superficial or caricatured version of “identity politics.” But all such movements include nuanced understandings of both individual identity and critiques of structures and systems of exploitation and oppression, ranging from the prison industrial complex to reproductive access to education to globalization. Progressive anticapitalist, antiracist, feminist, LGBTQ, and other activists understand that identity is always embedded in social structures – including the identity category of “white working class.”

Second, many such discussions often subtly suggest that poor and working-class whites are somehow subhuman. These apparently compassionate gestures participate in a long history of middle-class “sympathy for the poor” that in fact dehumanizes the object of sympathy. Such conversations either implicitly or overtly place blame on those “others” who live in certain parts of the nation (the South, the deindustrialized Rust Belt). As Patrick Thornton puts it, we need to “stop infantilizing and deifying rural and white working-class Americans.” Rather, we should treat working-class people — like all people—like human beings, which means taking their concerns seriously as well as holding them responsible for their thoughts and actions.

Moreover, despite deep distrust of the mainstream party candidates, most working class whites and people of color did not vote for Trump. The majority of people whose income is under $50,000 voted for Clinton. Their votes were acts of self-sacrifice and generosity on a number of levels, but we seldom hear about this from pundits and politicians.

The difference here is between “blame” and scapegoating, on one hand, and understanding causes, on the other. It’s one thing to understand that the system is broken for a lot of people. It’s another thing to blame the disastrous results of this election on the sheer ignorance of “deplorable” members of the lower classes. We must hold people accountable for their views, but by the same token, we must examine our own complicity in producing the terrible state of education, health care, child care, jobs, prisons, drug addiction — the list goes on. Post-election stories in the media – including NPR – repeatedly seem to suggest that we should try to understand these natives from a foreign land called the “white working class,” rather than examining the histories and reasons for why various social groups have taken on the forms they have today.

The working class is and always has been multiracial, and we have to do better – not just for “them” (whoever “they” is for you), but for all of us.

2 Responses to The White Working Class in Historical Context