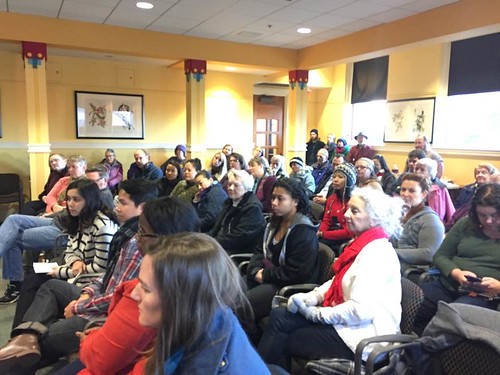 This past Saturday, more than 60 people gathered at the Pollard Memorial Library do discuss the 2016 presidential election. Community librarian Sean Thibodeau was the moderator. There were two groups of speakers, each of whom was given three minutes to speak, however, the bulk of the morning was spent in a moderated discussion among audience members and panelists. The panelists were UMass Lowell professors Bob Forrant, Sue Kim, and John Wooding; Clif Krieger, the Chair of the Lowell Republican City Committee; Francey Slater and Lydia Sisson, co-founders of Mill City Grows; Lianna Kushi of EforAll; and Masada Jones, a writer and community organizer.

I was in the audience and took some notes. Here is some of what I wrote:

Sue Kim began by reviewing the historical context of the “white working class” in America. (Sue shared her remarks with me and I have posted them separately).

Bob Forrant followed, saying that Donald Trump “did not adhere to traditional norms” regarding the use of racial resentment in his campaign. Prior Republican nominees were subtle and indirect in their appeals to racism while Trump was direct and explicit. Bob then went through numerous events in American history in which racial minorities were made scapegoats for economic problems. He predicted that such scapegoating will escalate under the new administration.

John Wooding identified himself as an immigrant (he’s from England) who is now an American citizen. He called this period “a crisis break” and said it was important to focus not just on the American election, but how that election is part of larger international trends. He said it’s important to step back and analyze what’s going on. History teaches us that when the system is fractured, people move to either the extreme right or the extreme left. He traced the start of the Trump movement to the Tea Party, which he referred to as the “sorcerer’s apprentice that was created but then could not be controlled.” In the European Union now, right wing movements have arisen in response to globalization. There is also a worldwide movement away from party identification which leads people to support those outside the traditional political system. He closed by saying the American Democratic Party doesn’t represent the working class anymore.

Clif Krieger gave a PowerPoint presentation correlating voter turnout in Lowell and support for Trump. He suggested that in the precincts where turnout was highest (Belvidere, Pawtucketville), Trump received a higher percentage of the vote than he did in other parts of the city. He showed other charts demonstrating that the same thing happened with Ann Wofford vs. Niki Tsongas; and Charlie Baker vs Martha Coakley.

That was the first set of panelists so a 20 minute audience discussion followed. I didn’t know everyone’s name, but I tried to take down the major points made, which follow:

Trump won all of the towns that surround Lowell except Chelmsford. Lowell exists and functions regionally and this region is very mixed politically.

What is a fact? People don’t believe anything they read. How do you know what is true and what is not? [At this point, Sean Thibodeau interjected that the local library is a great place to start].

All movements that have made significant change require some amount of civil disobedience.

Elites say “globalization is good for the economy,” but pretty soon no one without a college degree will have a job.

If you want to create change, you have to start locally. No one knows who is on the city council. If you are frustrated, get involved in the local election.

Donald Trump’s tweet attacking the union guy was cyberbullying; Trump is not dumb. That tweet was purposeful and intended to intimidate potential critics.

After that, it was time for the second panel to make their remarks. Masada Jones went first. She said that “Donald Trump’s victory meant that America let me down again.” She said Lowell needs to be more inclusive. “How do we get others in the room?” The leadership in Lowell “is extremely white” and “I don’t see [people of color] represented, and “I think that is a big problem.” Masada closed by saying “We all can sit behind our computers, but there’s much more that needs to be done.”

Lianna Kushi recalled how happy she was in 2008 (when Obama was elected) and how she cried after this election. She said it’s important to try to understand what others feel. It’s critical that we have conversations locally. Some of us aren’t surprised by the maps (Clif’s PowerPoint showing Lowell voting patterns). We should have conversations with people who are different from us, not just with those who are politically different.

Francey Slater said she’s lived in Lowell for seven years and plays to stay permanently because “it’s an amazing place.” She said it was dismaying to see the vote results in the communities around Lowell. It’s important for people to get involved locally. It is a powerful way to make change. The “echo chamber” makes you feel that the world is homogeneous. But it is not. The more we can see the world through the eyes of others, the more realistic our view of the world will be. Think about the community spaces (like the library) that already exist. Use them as platforms to bring people together. We have to create “vibrant sources of community connections” like parks, libraries, and other public spaces. When people come together in places like that, they grow to know and care about each other.

Lydia Sisson said she was at an urban farming conference last week and spoke with an African-American farmer from Boston. He told her “if I get angry, I’ll get arrested or killed.” She said “racism is all over the place” and that “we, as white people, have to better understand that.” Regarding Donald Trump, we can’t take the position that we should give him a chance. That’s a luxury we have because we aren’t the ones being threatened. We don’t recognize our privilege. When even people who are well-paid feel squeezed by the economy, consider that challenges faced by those who are less well-off. It’s very challenging to tell someone they are privileged when they don’t feel that way.

City Councilor Bill Samaras was in the crowd. He recalled his time as headmaster at Lowell High School, that the only successful way to engage parents, especially minority parents, to go to the places where they were, not to wait for them to come to the high school. Running for office, he encountered many people who said they only voted in national elections, that they weren’t interested in local politics. He said these people had it backwards because local politics is critically important. He said the more people vote in the city, the more welcoming a place the city will be. If you want to be welcoming, you have to reach out. He then talked about an ethnic council he’s trying to create in the city. He wants representatives from every ethnic group in the city to participate. This group would come together several times per year as a way of giving these representatives a voice. He closed by saying, “We don’t really understand each other, but we should try.”

That pretty much wrapped up the 90 minute session. I thought it was a valuable gathering. Even though nothing tangible came out of it – there were no “next steps” identified – just being in a group and talking was helpful and interesting. Hopefully the library will convene more of these sessions, perhaps quarterly.

3 Responses to Community Conversation on 2016 Election