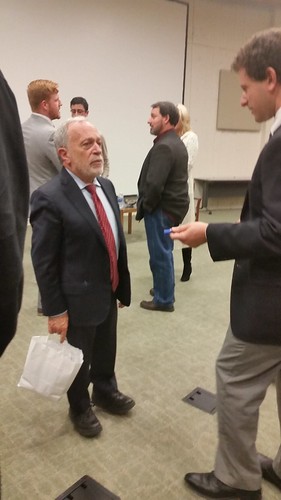 On Thursday, October 6, 2016, former US Secretary of Labor Robert Reich joined Massachusetts Secretary of Housing and Economic Development Jay Ash at UMass Lowell for the inaugural Community Teamwork Inc. “Community Conversation.” I included Ash’s comments in my Week in Review post, and promised to write separately about Reich, who some may recall, sought the Democratic nomination for governor of Massachusetts, losing out to Shannon O’Brien who went on to lose to Mitt Romney.

Reich began by saying that both major political parties have serious internal divisions. Many people in both parties have a feeling of quiet desperation, anxiety, and anger. For his most recent book tour, Reich asked his publisher to send him to cities in the reddest of states (i.e., places that reliably vote Republican) so that he could engage in conversations with the people there. He said he would always ask, “Who do you support for President?” and the answer he received, over and over again, was “Trump or Sanders.”

Why those two, especially given their political incompatibility? Reich’s audience members would reply that both Sanders and Trump “are taking on the establishment. ”For many years, these people have felt that the economy was rigged against them and that democracy wasn’t working for them.

Reich told the Lowell audience that he has studied widening income inequality for many years. The gap is not only of income, but it’s also in wealth and political power. Over the past 35 years, the median wage in the US has stagnated, yet the economy is twice as big as it was 35 years ago. Where has that new money gone? To the rich, and the rich don’t spend their money the way the middle class and poor do. Having more people spending more money is what drives the economy, but that’s not happening because so much of the money is concentrated in the hands of so few.

The cumulative effect of this concentration of economic power is very dangerous. We now see monopolistic practices in pharmaceuticals, internet providers, airlines, banks, and other fields. Since monopolies mean higher prices, the average person pays more money for everything in a cycle of upward distribution of income.

Many on the right claim to be disciples of the “free market,” but you can’t have a free market without government setting the rules through legislation, regulations, and the courts. The system today is indeed rigged, because the rules favor the companies and not the consumers. Reich believes that if you get big money out of politics, people across the ideological spectrum will work together to find reasonable solutions.

Reich also said that “the anti-establishment forces unleashed today are not going away.” We face a choice for the future between Authoritarian Populism and Reform Populism. The reason so many are angry today is because they know they are at great risk of becoming poor. That anxiety makes them susceptible to blaming others. Demagogues use economic stress to gain power by blaming others. Fear does not invite rational debate, rational decisions, or collaboration.

The United States is wealthier than any nation in the history of the world, yet we have widespread poverty. Forty years ago, there was no such thing as “working poor.” The solution to everything was to get someone a job, so all the efforts were towards job creation. Today, many who work fulltime are poor.

Reich closed by saying, “inequality is a choice; poverty is a choice.” The “market” is created by human beings who have made certain decisions. It’s all about power: who has it; who doesn’t. Historically in the United States, “whenever capitalism gets off track, we’ve rolled up our sleeves and did what was needed to be done.” He urged people not to succumb to a demagogue who promises in a time of economic and physical insecurity that he will make you safe. Instead, look to the type of agenda that was promoted by Bernie Sanders in the presidential race. Sanders, according to Reich, “accomplished astounding things.” The choice the country faces this year is hope and change versus “strong man authoritarism.”