The presidential election is just 37 days away, but here in Lowell, we’ll be able to cast our votes in just three weeks, as Early Voting debuts in Massachusetts. Prior to the enactment of this early voting law by the state legislature, you could only vote ahead of time by absentee ballot, and then only in limited circumstances (absent from the city on election day; physical disability that prevents you from getting to the polling place; or cannot vote at polling place due to religious beliefs).

The Lowell Election Office has scheduled two weeks of early voting events at various places around the city, each with a community host. As I understand it, any registered voter may vote at any one of these events regardless of your ward and precinct. All of the following early voting events will go from 4 p.m. until 8 p.m. on the date and place indicated:

In addition to the above, other early voting opportunities will be held on:

Finally, early voting will be available each weekday from October 24 to November 4 at Lowell City Hall during the following hours:

Traveling to the Daley School each election day to cast my vote has been a treasured civic ritual for my entire adult life, but early voting intrigues me, so I plan to take advantage of this new opportunity and vote in advance of election day.

I skipped the presidential debate this past Monday night, opting instead to go to Luna Theater to see the screening of “Urbanized,” a documentary about urban design, shown as part of the Pollard Memorial Library’s Happy City series. I got home mid-debate and followed the debate via my Twitter stream. It’s said that back in 1960, those who watched the presidential debate on television thought John Kennedy won, and those who listened on the radio felt Richard Nixon prevailed. I wonder if there is a similar dissonance between those in 2016 who watched live video and those who followed it indirectly on social media.

Returning to Lowell election news, the city council adopted two measures at Tuesday’s council meeting that will have an impact on future city elections. First, the council increased the salary of city councilors to $20,000, of the mayor to $30,000, and of school committee members to $15,000. The new salaries will take effect in January 2018, after the next city election. The last time there was an increase was in 2000 when council salaries were set at the current $15,000 ($20,000 for mayor) which was an increase from the $7500 salary that had been established in 1982. This newest increase (which I believe is entirely justified) came at a public hearing that saw not a word of public input, either pro or con, and no discussion or comment by the council.

The council also voted to petition the state legislature to increase the number of signatures needed to appear on the city ballot from the current 50 to 150. Council Rita Mercier, the main proponent of this measure, said its intent was to “weed out non-serious candidates” who sometimes trigger a costly preliminary election. Under the city’s charter, a preliminary election must be held any time there are more than eighteen candidates who submit 50 or more nomination signatures. Over the past few decades, as the number of people participating in local elections, both as candidates and as voters, has dwindled, we have repeatedly found ourselves with 19 or 20 candidates for council, which necessitates a preliminary election just to eliminate one or two candidates. Experience has shown that those bottom-tier candidates often do not campaign in any meaningful way and so have little hope of winning a council seat. For the city to spend $40,000 or more to hold a preliminary election just to eliminate a fringe candidate seems a waste of money to some.

While there are practical and fiscal reasons to try to keep a “fringe” candidate from triggering a preliminary election, increasing the number of nomination signatures required to get on the ballot does make it more difficult to run for office, a message that conflicts with our collectively expressed desire to get more people involved in the local political process.

One way to increase participation of voters and candidates is to change our system of local representation. That was the topic at a panel discussion organized, hosted, and videotaped by Lowell Telecommunications Corporation (LTC) this past Thursday night. Attorney Michael Gallagher served as moderator of a panel consisting of City Councilor Jim Leary; Sidney Liang, the director of Civic Engagement at Lowell Community Health Center; George Pillsbury, a Massachusetts voting rights activist who has studied and written about Lowell voting patterns; and me, for the historical perspective on Lowell voting and elections. As soon as the telecast schedule of the program is available, I will post it here and on social media. 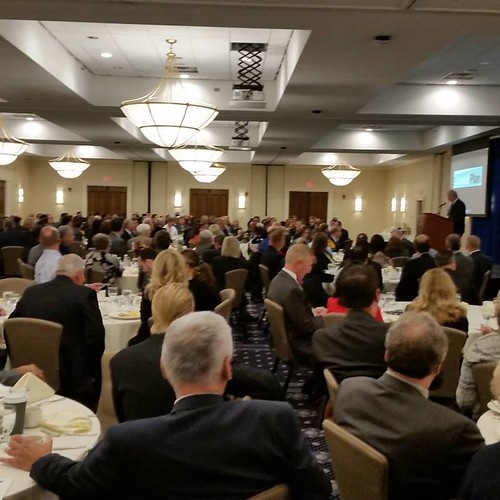 Mayor Kennedy highlighted three positive developments he saw as important to the city’s continued success. First was the Waterways Vitality Project which is bringing colorful illumination to the city’s canals and rivers to draw more attention and people to them. Second was last weekend’s Lowell Kinetic Sculpture Race which was a great success and which Kennedy hopes will become an annual event that will be part of a lineup of monthly or every-other-weekend year round festivals in the city. And third was the news that the Lowell public schools have shown steady increases in student performance, something Kennedy said was crucial to building and maintaining our housing market.

Kevin Murphy began his remarks by reciting the many economic development success stories now underway including the move of Kronos to Cross Point; the Markley Group’s cloud-computing megaplex on Prince Ave; the Lupoli Thorndike Exchange development; a $95mil expansion at Lowell General Hospital; the continued development of Cross River Center (the old Wang plan on Pawtucket Boulevard); the expansion of MA-COM; the groundbreaking for the justice center; and the “largest high school construction project in the history of the Commonwealth.”

Jim Cook of the Lowell Plan, emphasized Murphy’s comments about the Lowell High addition, saying it would be the legacy of today’s city leaders for the next 50 years. He said that without a new high school, we will have trouble selling homes and keeping people in the city. He compared the challenge of the new high school to the situation faced in 1990 when the city boldly pursued and obtained state funding for more than a dozen new school buildings (at which point he acknowledged in the audience former City Manager Jim Campbell, who he said was critical to the building of those schools and who never really got the credit for his role in that accomplishment). Cook asked the audience to imagine what the city would be like today without those schools, and said the same dynamic is at work today with the high school addition. 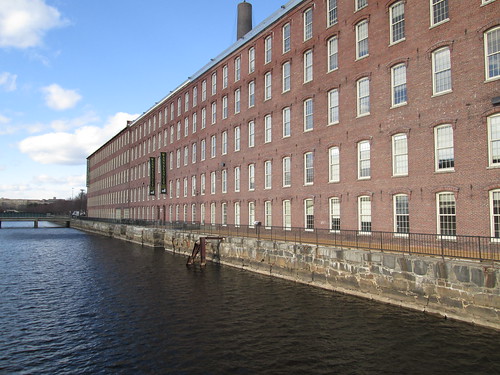 Sam Altreuter, a principal of Farley White Interests said that the company owns 3.5 million square feet of buildings from Boston to southern New Hampshire, with one-third of that in Lowell. The company first came here in 1998 when it purchased the Wannalancit Mills. Farley White specializes in “buying buildings that have something that needs fixing, fixing it, and then hanging on to it.” He said that his introduction to Lowell upon purchasing Wannalancit was “way beyond anything we had imagined.” The company has expanded to own a portion of the Boott Mills and Cross River Center, the former Wang manufacturing facility on Pawtucket Boulevard. Altreuter singled out Middlesex Community College, UMass Lowell, the Lowell Plan, the Lowell Development and Finance Corp, City Hall, and the MRT as things that “make Lowell a special place where it’s good to do business.” He also recalled that back in 1998 when he first told friends he was investing in Lowell that they were befuddled: Why Lowell? They asked. He said he organized a group outing of his associates and all their children to a Lowell Spinners game “to show them we weren’t crazy to be buying into Lowell.” The outing was a great success. 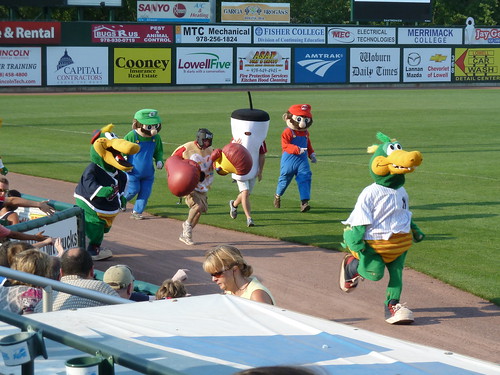 Between innings at Lowell Spinners game

And that was a great segue to the next speaker, Dave Heller, the new owner of the Lowell Spinners. Heller explained that although he already owned four other minor league teams, he saw the Spinners as more of a “public trust” with him as the steward than as an ownership opportunity. He also assured everyone that “this team isn’t going anywhere,” an allusion to speculation that Heller would move the team to a new city. Heller explained that he is a “fanatic about the experience of fans and their families at games.” He wants to “bring back the sizzle of the Spinners,” with more fireworks, more kids’ activities, more places for group outings. Every day he tells his staff “We are in the memory-making business” which is how he wants to run the team. Heller closed by saying he wants to be fully involved in Lowell, that he’s excited to be here, and that “to be a great city requires a great university” which was his way of introducing UMass Lowell Chancellor Jacquie Moloney.

Chancellor Moloney said that she loved the Lowell Plan breakfast because it brought together leaders of government, business, and nonprofits and was a reminder of how “we all support each other.” She also commended everyone for the strong support the community gives to UMass Lowell hockey, mentioning that the Riverhawks averaged 5600 fans per game last year, eighth highest in NCAA Division One hockey and the highest in all of New England. She said that hockey is a great economic driver for Lowell, citing a study that found that every home hockey game generated $200,000 in spending in the community. With that, Moloney introduced Norm Bazin, the UMass Lowell hockey coach. Bazin explained that he played for UML from 1990-94, was an assistant coach from 1996-2000, so he has seen all the positive changes in the city. He said that the characteristics he looks for in players – ones who are “fast, hard, and disciplined” – are characteristics he sees in the city, something he believes accounts for the success of the hockey team and of the community. With that, the breakfast concluded and people left feeling positive about Lowell.