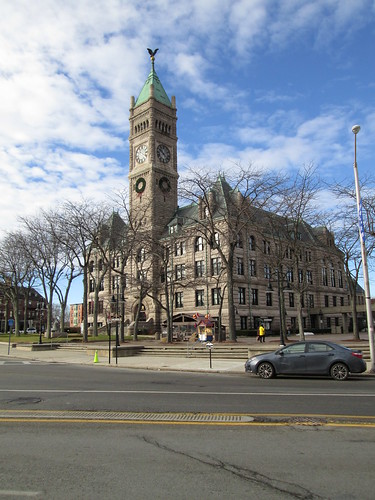 Manager Murphy explains we’re now in the feasibility stage which will decide the location. Representatives for Skanska (engineers) and Perkins/Eastman (architects) speak to the council. Now, they are documenting the building as it is, while looking at options for future sites. Manager Murphy interjects that a community-wide vision for LHS is very important. Invites audience members who are interested to call his office and he’ll put them on the visioning committee. Planners also plan to go to neighborhood meetings. They haven’t identified the number of locations to be considered. That will come out of the study they are doing now. Councilor Mercier says she thinks the high school should stay where it is, but there is a suggestion that the high school should expand to include the dentist office. She can’t see displacing those dentists who have been there for 30 years. She compares it to UMass Lowell buying the Perkins Apartments and displacing existing tenants. She declares she will not support moving those dentists out of there in order to expand the high school. The engineer rep says that suggestion was in a prior study that had nothing to do with these companies and that’s not the direction we’re now looking at. Manager Murphy says the timeline is to have three options available this winter and then to select one of them in the spring. He says the Mass School Building Authority makes those decisions.

Larry Curtis, president of Winn, addresses the council. Winn has been around since 1971 and has done all types of developments. They are a very large company in many states, but Lowell has become the centerpiece of their operations. Their headquarters is now in Boott Mills. Many of their projects in Lowell “have been started by others who couldn’t get them over the finish line.” They are proud to serve that role. They pay $1mil in property taxes to the city. As for Hamilton Canal, there is a high cost of development in Mass Gateway Cities, and then there are lease and rent rate realities that effect what is feasible. All construction will be ground-up. Cites 2008 master plan for HCD. He commends the city for the infrastructure improvements, for the courthouse groundbreaking, for the Signature Bridge, and for the city parking garage. He says this all “sets the table for long term success” of HCD. Says they will work closely with Watermark and Genesis. Winn sees their work as coming in two phases. Their experience here in Lowell and market realities have convinced them that on the lots alongside Appleton Mills and Pawtucket Canals, there have always been envisioned as residential space. They plan to make these market rate apartments. Also sees street level retail as part of this. On another parcel, they see a 40,000 square foot commercial development that will complement the new courthouse, but building such a structure requires them to first find a tenant: you don’t build such a building “on spec.” Future development will be north of Pawtucket Canal (closer to Market Mills). Challenges: Labor rates are high. Lease rates aren’t. There is a funding gap of 30% between what it will cost to build and what can be obtained thru rents with new construction of both residential and commercial ground-up construction. They do ask that an independent source be hired by Winn to conduct an updated feasibility study since the one now in existence is based on 2008 factors.

Council Comments – Councilor Belanger begins. Asks why there’s a 6 to 10 year timeline for bringing in companies. Winn says they’ll be soliciting companies immediately and if they find one, they’ll speed up that timetable. Reiterates the enormity of an entirely new, ground-up building. He refers to Boston’s efforts in bringing GE to Boston and says that’s the kind of collaboration they anticipate here. Winn reminds them that with no building to renovate, there’s no availability of historic tax credits. As for low income tax credits, he says a new state program provides 80% market/20% low income which is still for people making $40,000 per year so it’s more accurately called “work force housing” than low income housing. Belanger asks if considering condominiums. Winn says they are open minded; they’ll look to the feasibility study.

Other issues raised: Councilor Leary asks about the timetable for the Lord Overpass. Manager Murphy says 2020-21. He said there should be another public meeting coming up on that. Leary asks about the parking garage. Murphy says the council has already appropriated $1.2mil for design which should be done in spring 2017 and construction will continue. Murphy says the judicial center needs 300 parking spaces; Lowell Community Health needs another 150. So the city may have to build a second garage in HCD, closer to the courthouse.

A succession of councilors say they want market rate housing filled with people with disposable income.

Councilor Mercier asks about the “funding gap.” Winn says even with $2000 per month rent for market rate housing, you still need subsidies to be able to construct the property. Winn also cautions city councilors to refrain from saying “we don’t want any housing” because in the competitive environment for subsidies. Councilor Mercier asks why could Perkins get $6mil in historic credits and this project can’t get any. Winn explains that Perkins was renovating a historic building; this project is building brand new buildings which don’t qualify for historic credits.

Councilor Milinazzo says this is a reality check for the city council. We have one of the best developers in the country telling us there’s a funding gap that can be bridged by 80/20 mix of market rate/work force housing. If we don’t get real and recognize this is the only way this is going to be built, we aren’t going to be having any ribbon cuttings. Councilors can’t be afraid of the term “work force housing.”

Steven Panagiotakos speaks next. He says “work force housing is the people we represent.” He says it’s young people just starting out. We should want that; we shouldn’t be afraid of that. We want those people to stay here. Councilor Leahy thanks Panagiotakos “for the great explanation; that’s what we needed to hear.”

Ordinance amending the ordinance for salaries of councilors and school committee members (council from $15K to $20K; Mayor from $20K to $30K; School Committee from $7500 to $15K. No members of the public speak. Councilor Rourke moves to approve. No debate. Passes 8-1 (Elliott voting no).

Ordinance to petition legislature to raise signature requirement from 50 to 150 to be nominated to run for city council. No members of the public speak. Councilor Mercier says she proposed this to weed out non-serious candidates. She moves to approve. Rourke seconds. Elliott says every other community requires only 50 signatures. Says he thinks the solution is to increase the number of candidates needed to have a preliminary. Says he’s not going to support this. Passes 8-1 (Elliott opposed).

Vote to authorize City Manager to enter into Strategic Partnership Agreement with UMass Lowell and UMass Building Authority. After a few questions and comments, council votes 9-0 to authorize agreement.

Councilor Mercier, request city manager provide a report regarding structural integrity of the balcony at Lowell Memorial Auditorium as well as a report regarding the access available into the building from the loading docks for equipment used by the performers. Balcony has been tested by structural engineer; no problems with it. Regarding the doors, some acts can’t come here because they can’t fit equipment through the doors. CM Murphy says Auditorium capital plan calls for fixing bathrooms and these doors.

Councilor Samaras, request city manager have proper department repair sidewalks by St. George’s Church at corner of Bower and Fletcher Streets in anticipation of the 100 year anniversary of the church.

Councilors Leary & Samaras, request city manager work with the police department to monitor and to change the pattern of speeding and aggressive driving on Princeton Blvd.

Councilor Belanger, request city manager work with DPD on a new marketing strategy for the Hamilton Canal District now that the Judicial Center construction has begun.

Mayor Kennedy, request city auditor provide city council with an analysis of the financial impact the Charter Schools have on the city.