Love Where You Live

Visiting Mill No. 5 yesterday, I spotted this hand-printed sign in the window of Sweet Pig Press. Love Where You Live epitomized this past week in Lowell with the highlight being the lighting of the canals on Thursday night which was part of the Lowell Waterway Vitality Project.

Spearheaded by Fred Faust and Paul Marion, the Vitality Project is a joint effort by the City of Lowell, Lowell Heritage Partnership, Greater Lowell Community Foundation, Cultural Organization of Lowell (COOL), Lowell National Historical Park, Lowell Parks & Conservation Trust, Greater Merrimack Valley Convention & Visitors Bureau, Made in Lowell, Enterprise Bank, UMass Lowell, Middlesex Community College, and other partners. The project’s goal is to make better use of the canals as an artistic and recreational resource for city residents and as an attraction for those from out of town. Thursday night’s event featured the illumination of the Swamp Locks with colored LED lights. The lighting ceremony coincided with a major UMass Lowell “welcome back” party for returning students and the excellent Downtown Lowell First Thursdays events. 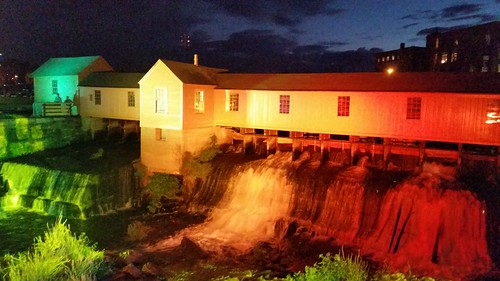 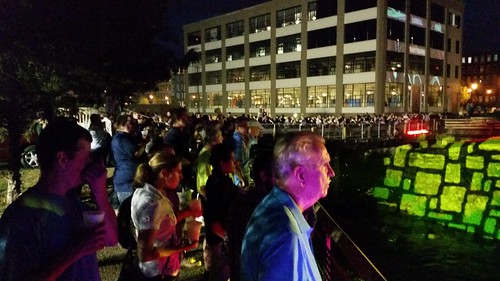 While the Swamp Locks lighting, like the illumination of the Merrimack Canal during February’s WinterFest, was for demonstration purposes, it gave everyone a tangible vision of the attraction of regular illumination of these and other water and architectural features.

Just as the canals can be a great attraction, so can our city’s two rivers, the Merrimack and the Concord. Yesterday, rangers from Lowell National Historical Park offered their annual Pawtucket Power Walk which began at the Boott Cotton Mills Museum and followed the Riverwalk and then the Northern Canal Walkway all the way to School Street and the Pawtucket Falls Gatehouse at the start of the Northern Canal. Many of the 60+ people who joined the walk had never been on the Northern Canal Walkway which was once a popular promenade in Lowell but has faded to obscurity in the past half century.

Unfortunately, the relative obscurity of these water features and their adjacent walkways persist. We have the rivers and canals and we have an incredible amount of walking infrastructure constructed alongside them. What we lack is people using them. The recipe for success is simple: Just add people. The photos below, from yesterday’s Northern Canal walk and from the Lowell Canal walk I led on Thursday night, give a sense of the beauty that can be found in the unlikeliest of places around Lowell. 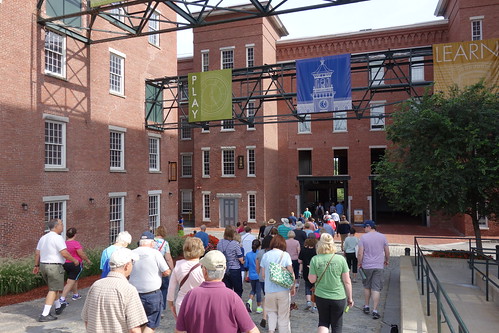 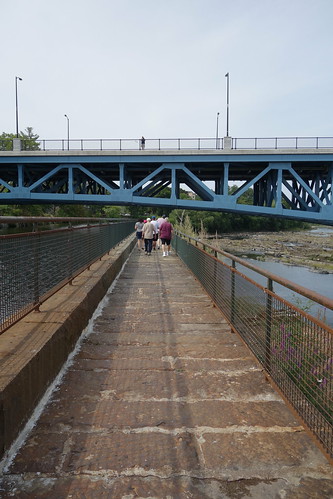 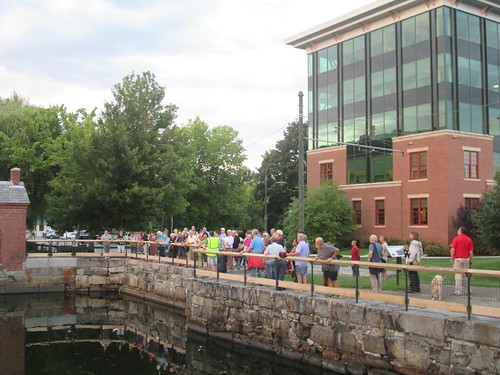 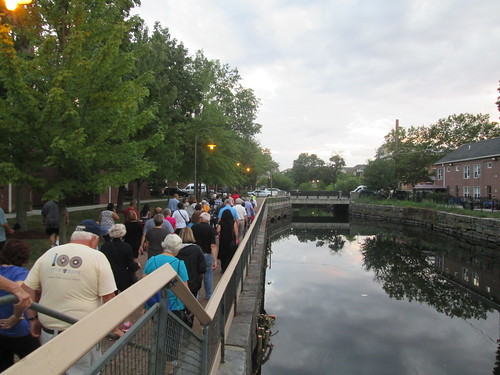 In the coming weeks, there are a couple of opportunities we all have to gather and discuss the on-foot perspective of Lowell. On Thursday, September 15, 2016 at 7 pm in the Pollard Memorial Library’s Community Room, I will lead a panel discussion called “Lowell Walks: People & places—Building Community.” Panelists include Jane Calvin, the executive director of Lowell Parks and Conservation Trust; Bob Forrant, professor of history at UMass Lowell; and Paul Ratha Yem, a local realtor and active member of the city’s Cambodian community. We, along with heavy audience participation, will discuss how Lowell Walks and similar activities add to a sense of conviviality, shared spaces, sense of place, and other impulses and emotions that help make city dwellers happier.

This event is part of the 2016 Lowell Reads program which features the book “Happy City: Transforming our Lives Through Urban Design” by Charles Montgomery. While there will be a discussion of the book this coming Thursday, there are many other activities including a concert, a film screening, and a block party. Check out the library’s website for the full schedule. 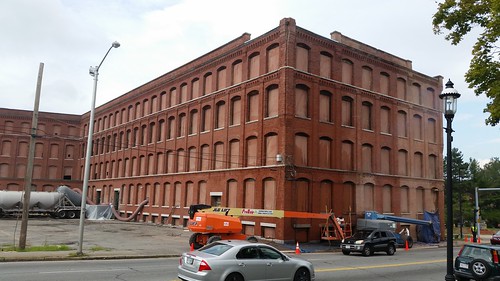 Thorndike Exchange and four lanes of traffic on Thorndike St.

The redevelopment of the old Thorndike Factory Outlet/Hood Medicine Company building is proceeding rapidly. Chris Scott, in his Column Blog, reported on a possible snag in the project. Developer Sal Lupoli wants cars approaching the complex from the Lowell Connector end of Thorndike Street to be able to turn left into the complex which will contain restaurants and retail establishments as well as a hundred or so residential apartments.

Scott reports that city traffic engineers have not embraced this idea due to the large volume of traffic already proceeding outbound on Thorndike Street. He also reports that they city has applied for a $2.5mil grant from the state to widen Thorndike Street to allow for a center turn lane into the complex.

I think Thorndike Exchange, as this project is called, is great for the city and I hope it works, but do we really want to WIDEN Thorndike Street? I’ve previously called Thorndike & Dutton Streets (i.e., the Sampson Connector), Lowell’s version of the Berlin Wall. That roadway splits the city in two, separating the Highlands and Acre from downtown. I’ve also said that a critical ingredient in the success of the Hamilton Canal District will be making it easier for people in those two neighborhoods to get into HCD on foot, something that is hazardous to do given the current configuration of the road. That’s why I was so enthused about City Manager Murphy’s proposal to “blow up” the Lord Overpass and return it to its traffic-calming, pedestrian friendly existence as a surface intersection.

There’s been no public discussion of the Lord Overpass Project since the March 28, 2016 public meeting when this radical new proposal was unveiled. Maybe that’s because that project is still in the preliminary planning stages. The Thorndike Exchange project, however, is moving at an accelerated pace so this left turn issue will have to be addressed first.

Hopefully solving the turn-into-Thorndike-Exchange challenge can jumpstart the public discussion of the Lord Overpass remake. Thorndike Street as it exists now is a highway without the safety features of highways. We should remake it into a tree lined-urban boulevard with narrower travel lanes, center turn lanes, dedicated bike lanes, and all the other traffic calming measures available to make it safer and more convenient for everyone to use while at the same time allowing the developer of Thorndike Exchange the vehicular access to the site that he needs to make the project work. 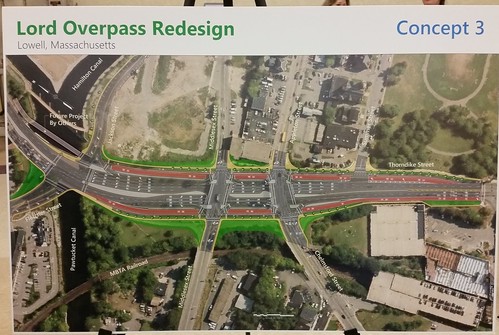 This coming Thursday is the state primary election. In presidential election years, the state primary tends to get less attention than it does in gubernatorial election years. Locally, the big race on Thursday is for the 18th Middlesex District State Representative seat which has been held by Rady Mom for the past two years. Mom is being challenged by Dave Ouellette and Cheth Khim in the Democratic Primary. Whoever wins the primary will face Republic Kamara Kay in November. The nonpartisan group Lowell Votes held a Civic Engagement Rally at JFK Plaza Friday night. Mom, Ouellette, Khim, and Kay all spoke. Fellow blogger Mimi was there and will have a separate post about the event. 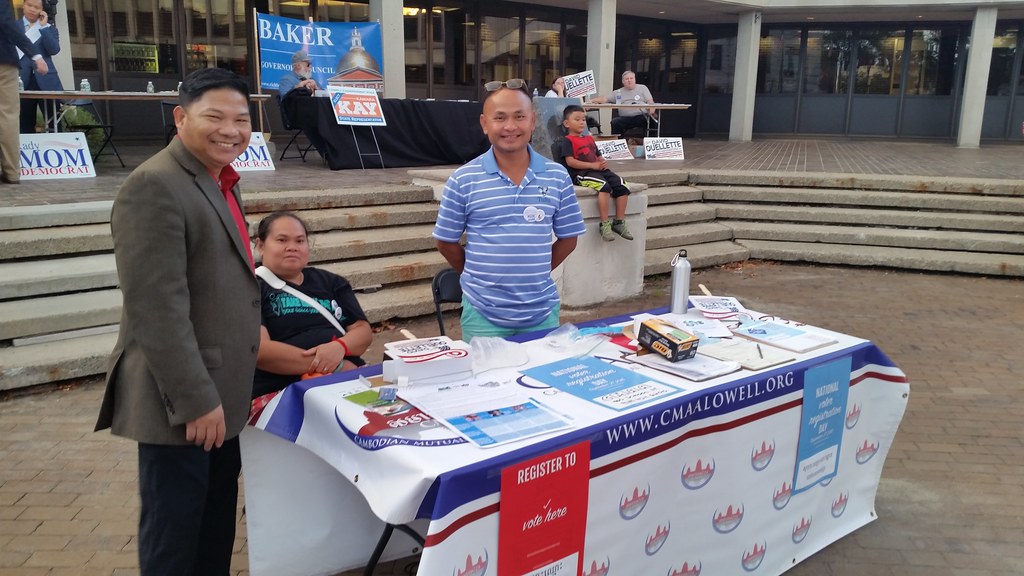