This past Friday evening, I attended the Lowell Votes Rally for Civic Engagement, which was held at JFK Plaza.  The grass roots, non-partisan organization seeks to increase participation in city elections, especially in neighborhoods with historically low turnout.

All candidates who are on the ballot this fall (I assume Clinton and Trump were the exceptions) were invited to attend and address the gathering.  Needless to say, the election for the 18th Middlesex State Representative seat was the focus.  All four candidates were there and gave spirited speeches.

I did listen attentively to the two candidates from our District (#5) for the Governor’s Council: Eileen Duff, the incumbent, and Rich Baker, the challenger.  This down ballot political office does not receive much attention but after hearing the two, I am going to further investigate so that I can make an informed choice. 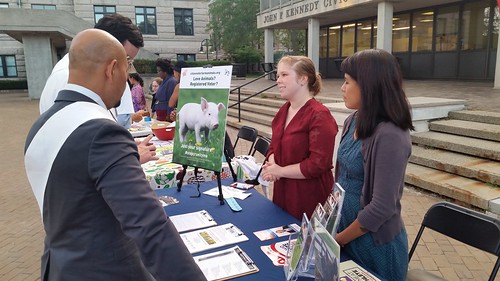 In addition to the candidates and their supporters, the rally featured a number of non-profits and advocacy groups who distributed information on their activities.  I was particularly interested in “Yes on 3.” That is the coalition that has successfully placed on this year’s ballot a referendum on the treatment of animals. A lot of the focus is on Question 2 (Charter Schools), but as we approach the election, I think Question 3 will also be widely debated.

I also spoke to the people from the Lowell Alliance For Families and Neighborhoods. They have developed a new initiative with CBA, an 8-week training program to provide participants leadership and organizational skills so that they lead and create necessary changes on the grassroots level.  If you are not familiar with the Lowell Alliance, I would strongly suggest you check out their website. 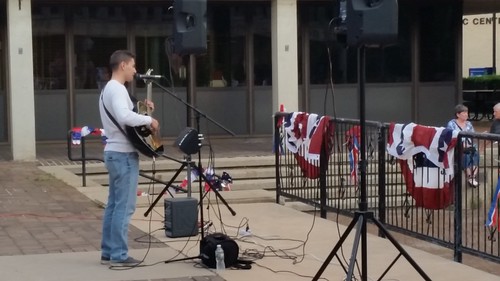 I would also like to mention the two young musicians, who provided entertainment. Santiago Parades  sang and played his guitar prior to the program and Joshua Lin played the piano after the program.  If any candidate is in need of entertainment for their next election party, you may want to contact them.

Now that summer is unofficially over, it was a great opportunity to catch up with other Lowellians to discuss the state of affairs in local government and politics.

On another note, yesterday, the Lowell Sun website posted the article on the event.  It was written by one of their correspondents, Prudence Brighton.  The article is a good representation of the entirety of the event, however the title is not.  Do not let it stop you from clicking and reading Ms. Brighton’s take on this civic activity as well as the hard work by the volunteers of Lowell Votes.